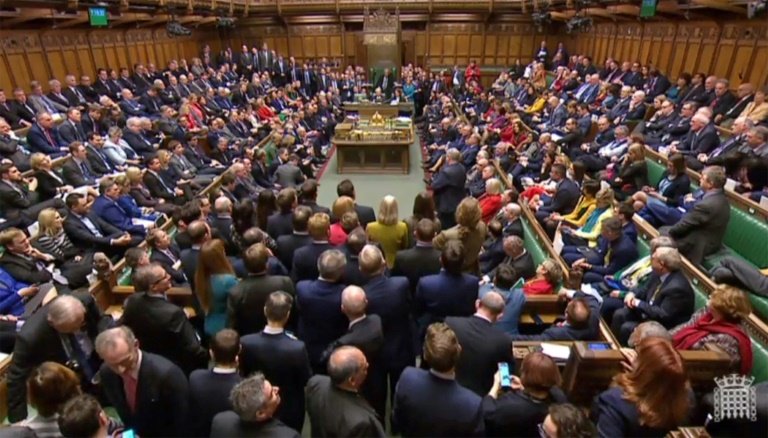 The British parliament had a series of Brexit votes, sending the pound lower / © PRU/AFP/File

The pound tumbled against the dollar and euro on Tuesday after the British parliament rejected a proposal to delay Brexit.

On a mixed day for global stocks, the trajectory of Britain's departure from the European Union was as murky as ever after a series of votes in parliament that included a rejection of a proposal to order the Prime Minister Theresa May to delay the exit if no new deal with the EU emerged by February 26.

Parliament then went on to vote 317 to 301 in favor of the amendment asking May to replace the deal's so-called backstop provision preventing a hard border with Ireland -- a proposal immediately rejected by an EU spokesman.

Boris Schlossberg, a foreign exchange analyst at BK Asset Management, said the EU and British parliament were in a "game of chicken" over terms to avoid a so-called "hard Brexit," where Britain exits the bloc without a deal.

Britain is currently scheduled to leave the union on March 29.

"The risks have increased because time is ticking and nobody seems to have a realistic solution right now."

US stocks finished mostly lower, with the Nasdaq falling 0.8 percent ahead of a slew of major tech earnings.

Apple slipped 1.0 percent in after-hours trading after reporting first-quarter of earnings of $20 billion, roughly the same as in the year-ago period. Apple also lost 1.0 percent during the session.

Amazon, Microsoft, Facebook all lost at least two percent during the session ahead of results later this week.

The Fed has in recent weeks signaled a cautious approach to lifting interest rates, a key factor in the market's rally since late December.

Markets are also looking ahead the resumption of trade talks between China and the United States.

Some analysts viewed the prospects for a Beijing-Washington agreement as dimming after the US Justice Department on Monday announced criminal charges against Chinese telecommunications giant Huawei.

But Treasury Secretary Steven Mnuchin said the Huawei matter was unconnected to the trade negotiations, adding in a Fox Business interview he expected "significant" progress in the talks.