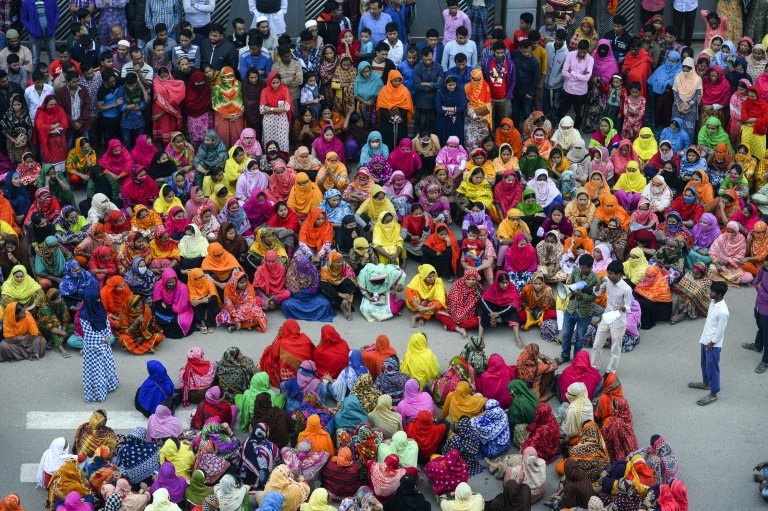 Protests by thousands of garment workers in Bangladesh over low wages began earlier this month, prompting scores of manufacturers to halt production / © AFP/File

Bangladesh factories making clothes for Western brands have sacked hundreds of workers after more than a week of strikes and clashes over wages, police and trade unions said Wednesday.

The country's $30-billion clothing industry is the world's second-largest after China. Its some four million workers at 4,500 factories make garments for global retail giants H&M, Walmart and many others.

Protests by thousands of employees over low wages began earlier this month, prompting scores of manufacturers to halt production.

One worker was killed and more than 50 injured last week after police fired rubber bullets and tear gas at protesters in a key industrial town outside the capital Dhaka.

The demonstrations died down this week after the government agreed to raise salaries, but many returned to work on Wednesday to discover they had been laid off.

A top union leader said at least 750 workers at various companies in the manufacturing hub of Ashulia had found notices hanging on factory gates informing them of their dismissal along with photos of their faces.

"This is unjust. The owners are doing it to create a climate of fear so that no one can dare to stage protests or demand fair wages," the leader said, speaking on condition of anonymity.

"Police told me not to create trouble. Otherwise I'll be disappeared."

Police and a senior factory manager gave a lower total of around 400 workers fired for damaging equipment during the strike -- with more than half from one Ashulia plant called Metro Knitting and Dyeing.

So far 12 arrests have been made for vandalism during the unrest, local police said.

The strikes came a few weeks after Prime Minister Sheikh Hasina -- accused by rights and opposition groups of becoming increasingly authoritarian -- was re-elected on December 30 after a violence-plagued campaign.