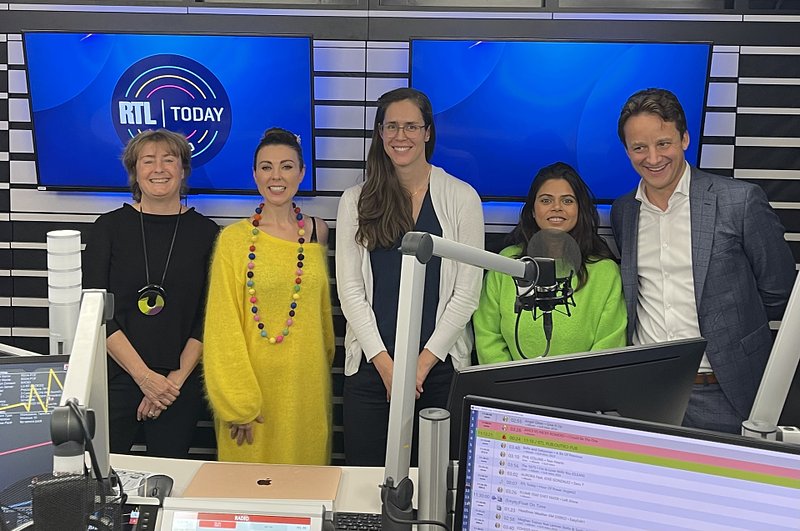 Lisa's guests this week showcase the abundant creative spirit in Luxembourg, from music for all at the Philharmonie, to calculating our carbon footprint, to redirecting your life as a fashion designer.

This week, as always, we take a look back at the week's news with Sasha Kehoe, but with a focus on females. In the upcoming Italian elections we have Georgia Meloni featuring as a frontrunner. Iran has been in the news ever since 22-year old Mahsa Amini died last week after being detained by the “morality police” for some violation of the country’s laws on women’s dress. Now, protests are widespread. In Spain, the entire top female footballers have resigned as a unit in order to oust the head coach, for harming their emotional state and health.

Percussion Extravaganza at the Philharmonie

If you're looking for something for all the family this weekend, check-out the Percussion Extravaganza at the Philharmonie.

The Philharmonie's expert team build tailor-made programmes in different languages for various age-groups, to encourage music as a natural part of people's lives as they grow. They know that not everyone's family has the habit of attending somewhere like the Philharmonie and hence the importance of bringing music into the schools, to democratise access.

Dr. Claudia Hitaj leads research on sustainable finance and manages LIST's CarbonNerd project to educate young people and the general public about climate change, our carbon footprint, and decarbonization paths ahead. She is also the host of the Net Zero Future series on the podcast Luxunplugged.

One of Claudia's many missions is to empower us to effect change with respect to decarbonising our lifestyles by 2050. She is conscient that getting to this goal is not easy and will mean government policy change and a lot of effort from all of us.

The average carbon footprint of a Luxembourg resident is 13 t of carbon dioxide per person per year - one of the highest in Europe, and indeed the world. The main contributors are transportation, followed by housing, food, consumption goods, and public services.

For more information on how to help visit climateagence.lu

You can access the CarbonNerd booklet in English here.

It's almost here again: Luxembourg Fashion Week is on 1 October next weekend.

Francine Keiser (@Francini_K), was a lawyer for many years before launching her couture brand earlier this year. Francine studied couture in Paris and won the school's 2021 annual parade out of 500 designers.

Francine is inspired by the sixties, with her debut collection featuring glamorous evening dresses that combine classical fabrics and technical material as well as more simple, chic outfits.

Anushka Prakash, originally from India, emigrated to Europe after she married, and decided to study shoe design in 2018 in the internationally recognised Institute Marangoni in Florence, Italy.  Her brand is called Moajaza which means miracle in Arabic.

Anushka, for Luxembourg Fashion Week, will show her second collection of handcrafted footwear inspired by cultural heritage around the world.

Please do subscribe to the podcast, rate and review on Apple and  Spotify
I'd love to know what shows you want more of, what ideas or guests you enjoy so that I can tailor make my show to suit your requests.