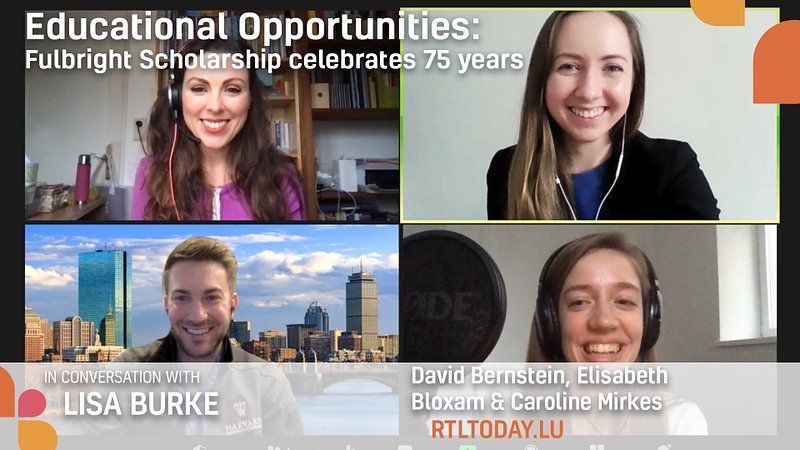 David Bernstein, Elisabeth Bloxam and Caroline Mirkes were all recent Fulbright alumnae to / from Luxembourg. Here they share their transformative experiences and notes on how to apply.

If you go through the who’s who of Luxembourg’s heavy-hitters and glitterati, there will be a number who were Fulbright Scholars to America. This cultural and educational scholarship offers strong candidates an outstanding opportunity to live and study in America at any point in life after a Bachelor’s degree. And it’s not just for Luxembourg passport holders (although your statistical chances of getting a place with one may be higher); the Fulbright programme operates between 160 countries.

Fulbrighters talk of the life-long relationships they build both personally and professionally in this evermore interconnected world. You will hear in this conversation the ‘high value return on investment’, as David likes to put it, and believes it might be the greatest form of local citizen diplomacy.

Elisabeth Bloxam, herself a Fulbright alumna, is the Director of Programs at the Commission for Educational Exchange between the United States, Belgium and Luxembourg, the Fulbright Commission in Brussels - your go-to person if you’re interested in this scholarship.

Elisabeth spent her Fulbright year in Luxembourg as an English Teaching Assistant, and has been with the Fulbright Commission in Brussels since 2016. Prior to that she studied European Studies and French & Francophone Studies from the College of William & Mary in Virginia (2015).

David Berstein was a Fulbright Research Awardee in 2013 in Luxembourg, when he studied towards a Master in Entrepreneurship and Innovation from the University of Luxembourg. He also spent time working with Silicon Luxembourg and the US Embassy during that academic year, and harbours a hope to return as US Ambassador to Luxembourg one day!

David has an MD and MBA from the University of Rochester School of Medicine & Dentistry and Simon Business School. He spent a year at the Institute For Strategy & Competitiveness at Harvard Business School.

Caroline Mirkes is a composer, actress, cellist and pianist from Luxembourg. The Fulbright programme took her to New York University for a Masters, but she also became a part-time student at the Lee Strasberg Institute where she began to study acting. Prior to that, Caroline studied Cello Performance at Maastricht Conservatorium, the Koninklijk Conservatorium of Brussels and Escola Superior de Barcelona.

Now based in Vienna, Caroline continues to create global projects and concerts, which include Performers.lu, Cello Octet Luxembourg and art creations. Recently, her short film Criminal Eyes is selected for the Lee Strasberg Film Festival in NYC and nominated for Best Supporting Actress. She continues acting at the Schauspiel schule Wien. And aside from that, finds time for dance, acrobatics and aerial silk lessons!

Origins of the Fulbright Program

Just after the Second World War in September 1945, a freshman senator from Arkansas, J. William Fulbright, introduced a bill in the U.S. Congress that called for the use of proceeds from the sales of surplus war property to fund the “promotion of international good will through the exchange of students in the fields of education, culture and science.” One year later, President Harry S. Truman signed the Fulbright Act into law.

Senator Fulbright saw an opportunity for good in the wake of the Second World War and proposed a program whose aim was to create the kind of mutual understanding and people-to-people relationships that would prevent such global conflict from happening again.

The Fulbright Program has blossomed to become the flagship international educational exchange program of the U.S. Department of State.

In Luxembourg, the Fulbright Program provides scholarships for Luxembourgish citizens who wish to conduct research or pursue graduate study in the USA and for American citizens to come study and teach in Luxembourg.

The Fulbright Commission in Brussels administers the Fulbright Program for citizens of Belgium and Luxembourg as well as participants in the Fulbright Schuman Program, but the program operates in over 160 countries worldwide and awards approximately 8,000 grants annually.

Information about grants for Belgian and Luxembourgish citizens is available here.

For more educational and cultural exchanges offered by the U.S. Embassy to Luxembourg read here.

Celebrating 75 years of the Fulbright Programme

Please subscribe to my series and leave a review!