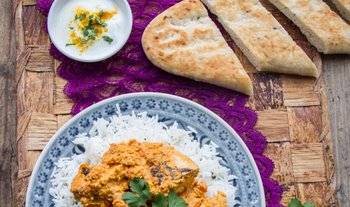 This is the most popular curry in Britain! Believe it or not, but one in seven curries sold in the UK is a chicken tikka masala – no wonder it’s considered a British national dish.

Start by making the marinade: in a pan, dry-fry the cumin seeds for a minute until they darken. Take o the heat and put into a food processor. Peel the garlic cloves and the ginger. Cut the stem o the chili and put into the food processor together with the garlic and ginger and whizz into a paste. Add the spices, yoghurt and lemon juice and pulse again.

Wash the chicken breasts, pat dry with some kitchen roll and slash each breast crossways several times. Place into a glass dish and cover with the marinade, rubbing the paste well into the slashes. Cover and chill for at least 2 hours, or up to 8.

Once the chicken has finished marinating, make the sauce. Dry roast the dessicated coconut and almonds in a large saucepan. Once they darken and become fragrant, take o the heat and set aside. Peel the onions and whizz together with the ginger into a paste in the food processor. Heat the oil in the large saucepan, add the spices and the onion mix and fry on a medium heat for 5 minutes. Add the chopped tomatoes, sugar and a bit of salt and cook for another 5 minutes.

Preheat the oven grill to high. Place the chicken breasts and the marinade onto an oven tray and grill for about 12 minutes, turning once, until lightly charred.

Meanwhile, add the hot stock to the sauce and cook while the chicken is grilling, for about 12 minutes. Then add the coconut and almonds and stir.

Cut the chicken into large chunks and add to the tomato sauce. Simmer for 10 minutes. Stir in the cream and reheat.

Taste the sauce and season with lemon juice. Sprinkle some coriander over the curry and serve with basmati rice and naan bread. 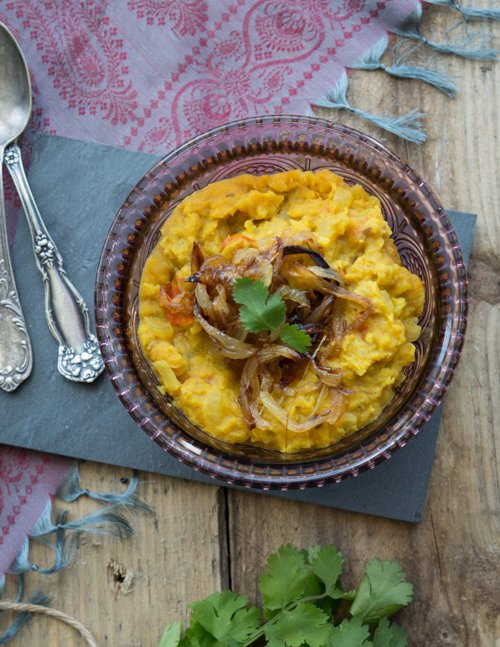 An Indian lentil dhal has to be part of a good curry night. This is a really creamy dhal, as it’s made with coconut milk. I love having a batch of this dhal in the freezer, ready to whip up whenever I need a bowl of Indian comford food on a cold day.

Finely chop one of the onions, halve the other onion and cut into thin slices.

Cut the stem o the chili and finely chop.

Heat one tablespoon of oil in a saucepan, add the chopped onion (keep the sliced onion for later), the chili, 1 tablespoon of the cumin seeds and the ginger. Fry for about 5 minutes until the onion is soft. Add the turmeric and garam masala and fry for another minute.

Add the lentils, salt, coconut milk and 300ml water and bring to a boil. Turn down the heat and simmer for 15 minutes.

Roughly chop the tomatoes and add to the dhal, cook for another 5 minutes or until the lentils are soft.

Serve the dhal topped with crispy onions and with naan bread or rice. 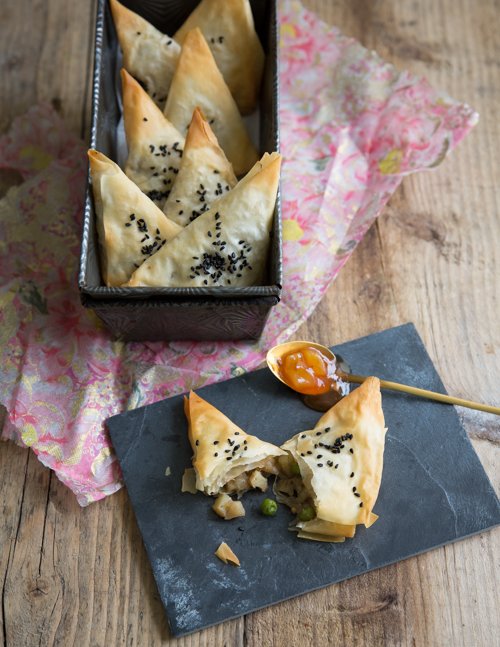 Often samosas are wrapped in a thick buttery pastry, which makes them really doughy. These are the exact opposite: delicate little parcels wrapped in paper-thin buttery filo pastry – making the fragrant filling the star of this fantastic Indian snack.

Peel the potatoes and cut into little cubes of approx. 1⁄2 cm. Set aside.

Peel and finely chop the onion and put into a frying pan with the sunflower oil. Fry for about 4 minutes until the onion has softened. Add the garlic and ginger and fry for another minute, then add the garam masala, cumin seeds, mustard seeds and chili flakes and give it a good stir.

Add the potato cubes and pour 400ml water into the saucepan. Bring to a boil and cook for 5 minutes. Then, add the frozen peas, season with salt and cook for another 5 minutes until all the liquid has been absorbed. Take off the heat and set aside.

Unroll the filo pastry and cut lengthways into three strips. Peel off two strips, cover the rest with cling film, then top with a damp tea towel so that the pastry doesn’t dry out.

Lay the strips out lengthwise, so that the short side is facing you. Brush the first filo strip with melted butter. Place the second filo strip on top of the buttered strip and brush with more melted butter.

Put a tablespoon of the potato filling into the middle of the lower end of the strip, leaving a 2cm border. Take the right corner and fold diagonally to the top left corner above the filling, enclosing the filling and forming a triangle. Fold again along the upper crease of the triangle. Keep folding this way until you reach the end of the strip.

Brush the outer surface with a bit more butter and sprinkle the top with sesame seeds. Place onto a baking tray and repeat to make the rest of the samosas.

Bake for 12 minutes until the samosas are golden. Serve with mango chutney.