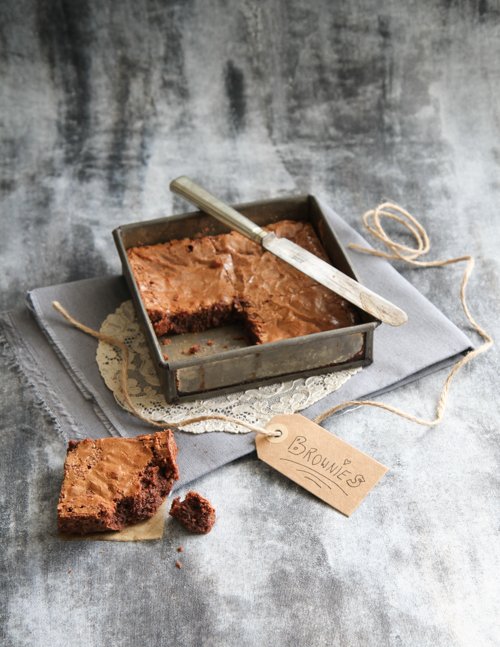 Let me be straight, these are the world’s best brownies! Gooey and chewy on the inside, with a nice little crust around. If you’re shocked by the amount of sugar that goes into these and are tempted to reduce it, don’t! The sugar is actually responsible for the brownies’ magical texture.

Melt the chocolate and the butter. Put the sugar, salt, vanilla sugar and eggs into a bowl. Whisk until pale, then add the melted chocolate mix, while still beating. Add the flour and incorporate well.

Line the bottom of a brownie tin measuring approximately 18x24 cm with baking paper. Pour the brownie mix into the tin and bake for 35 minutes. The brownie will still be quite wobbly in the centre when you take it out. Let the brownie completely cool down before serving.

If you like brownies with a bite, add 100g of nuts such as pecans or walnuts to the batter. Or, sometimes I like to add 50g of candied orange peel to mine, to make my favourite chocolate-orange brownies. 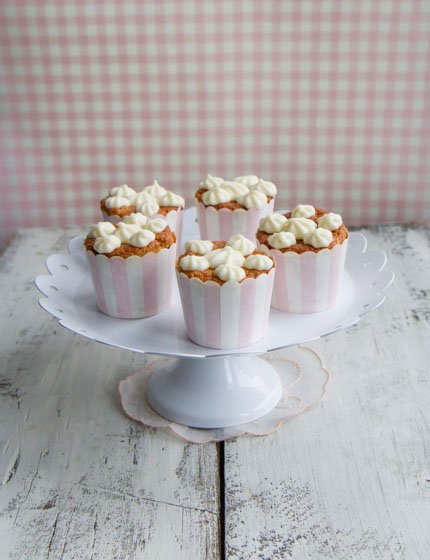 Cinnamon, cream cheese and an unbeatable texture make carrot cake the king of all baking creations for me. The recipe for my carrot cake is one of the most popular posts on my blog –  so I just had to include it in the book. These here are carrot cupcakes, if you want to make a big cake instead, just use a 20x20cm cake tin and bake for 1 hour.

Line a muffin tin with 14 cupcake cases. Grate the carrots. Finely chop the walnuts and the pineapple.

In a large bowl, whisk the eggs at high speed, add the sugar and continue beating until pale and flu y. Keep the whisk on at high speed, and add the oil in a steady stream.

In a separate bowl, mix the flour, dessicated coconut, the cinnamon, baking powder and salt, then fold into the egg mix. Once mixed, gently incorporate the grated carrot, the pineapple and the walnuts.

Transfer the mixture into the muffin tin and bake for 40 minutes, or until a skewer comes out clean.

Prepare the frosting. Cut the butter into little cubes. Then, using an electric whisk, cream the butter and cream cheese together. Add the icing sugar in 3 parts, but hand beat the mixture first (otherwise you end up covered in icing sugar dust). Carry on whisking until smooth. Put in the fridge to set.

Once your cupcakes are done, leave to cool for 10-15 minutes before turning onto a wire rack. Then, when they’re cool, spread the frosting generously over the top.

Store the cupcakes in the fridge. 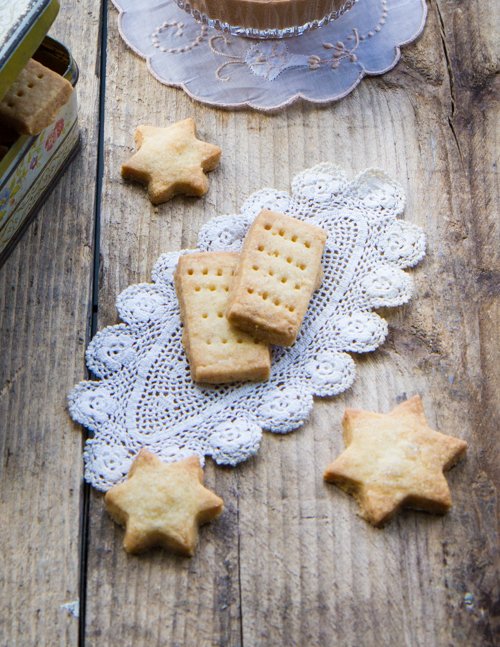 If you ask me, Shortbread is the best butter biscuit on earth. Originally from Scotland, this biscuit is really easy to make and best enjoyed with a cup of strong English tea.

In a bowl, beat the butter and the sugar together with an electric whisk until smooth. Scrape out the vanilla seeds from the vanilla pod and add to the butter, mix again.

Add the flour, whisk until it looks crumbly. Now, use your hands and knead until you get a dough. This will be very crumbly at first, but give it a bit of time and the dough will come together.

Put the dough onto a floured surface and roll out until it is roughly 1cm thick. Cut into rectangles and prick a few times with a fork, to give the shortbread its traditional look.

Put the cookies onto a baking tray, lined with baking paper, sprinkle with a bit of sugar.

Bake the biscuits for 15-20 minutes until golden-brown. Let cool on a wire rack. 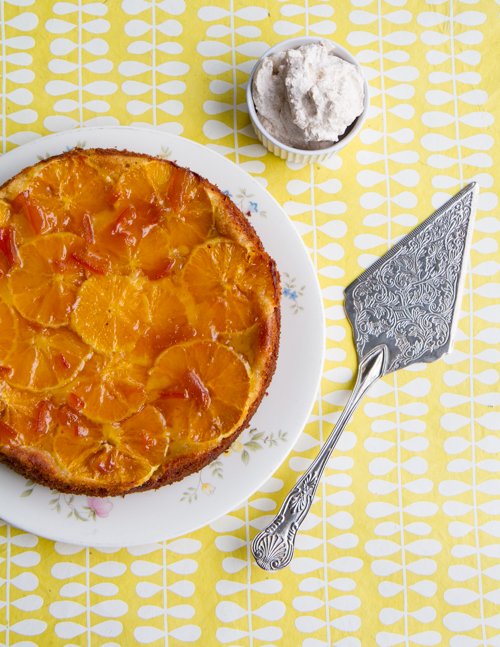 This sticky orange cake is a pure joy: moist and buttery on the inside with a sticky coating of bittersweet marmalade and a generous dash of whisky. It’s best to use a sweet, honey-flavoured whisky for this cake, as a smoky spirit might be too overpowering. You can of course make this without alcohol, in which case it’s best to melt the marmalade with 4 tablespoons of water.

Peel two oranges and cut into thin slices. Squeeze the juice of the remaining two oranges (around 150ml) into a small bowl and set aside.

In a bowl, mix the sugar, vanilla sugar and butter until pale and fluffy, then beat in 3 tablespoons of the marmalade followed by the eggs. Fold in the flour, baking powder, almonds, salt and orange juice.

Sprinkle the brown sugar onto the baking paper at the bottom of the tin. Arrange the orange slices on the base of the tin in a slightly overlapping layer. Carefully pour the cake batter into the tin and bake the cake for 65 minutes.

Take the cake out of the oven and leave to rest for 5 minutes. Then, cut around the edges and remove the spring form ring. Very carefully, while the cake  is still warm, put a serving plate on top of the cake and turn it over, so that the bottom is now at the top. Remove the tin and baking paper to reveal the oranges on top of the cake.

In a saucepan, heat the remaining 3 tablespoons of marmalade with

4 tablespoons of whisky until it becomes liquid. Prick holes in the cake with a skewer and spoon the marmalade whisky liquid over the warm cake.

Let the cake completely cool down before serving. Meanwhile, make the whipped cream by beating the cream, sugar and cinnamon with an electric whisk until it forms stiff peaks. Fold in the whisky with a spoon and serve with the cake.