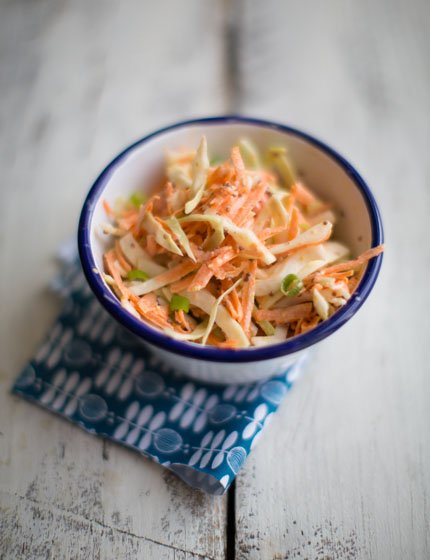 I have to admit it, coleslaw hasn’t got the best of reputations – heaving with mayonnaise and often not very tasty, slaw’s not the most popular kid in town. So, let’s make it cool! My simple recipe mixes a base of good quality mayonnaise with wholegrain mustard and some tangy red wine vinegar. It’s so simple, yet so good.

Peel and grate the carrots. Finely slice the spring onions and the cabbage.

Add the vegetables and mix well. 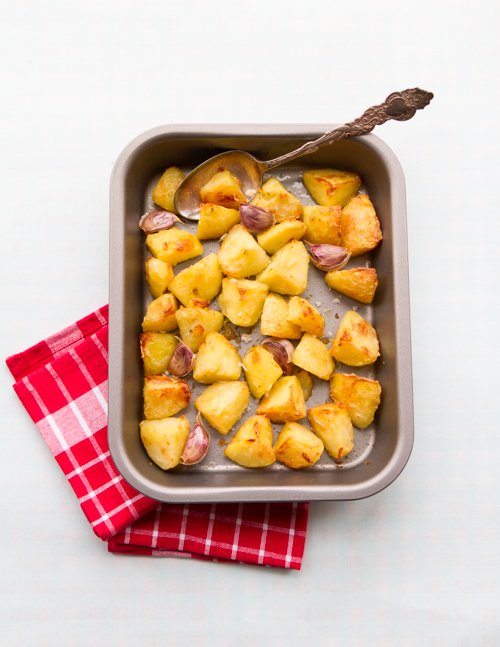 Commonly given the endearing name of roasties, roast potatoes are a real must for any Sunday lunch. Their crisp exterior gives way to a floury inside, which perfectly soaks up any gravy –  a match made in heaven.

Peel the potatoes and cut into even-sized chunks.

Boil the potatoes in salted water for 5-6 minutes until almost cooked  (they will still feel firm when pierced with a knife). Drain and shake the potatoes around a little in the colander until the outsides are roughened – this will make them really crispy.

Put the potatoes into a roasting tin and drizzle with the butter and 4 tablespoons olive oil. Crush the unpeeled garlic cloves by pushing down on them with a wooden spoon. Add to the tin and sprinkle everything with salt. Put in the oven and bake for 50 minutes.

Midway through the baking, after about 25 minutes, take out the tin out, give the potatoes a shake and drizzle with the remaining 4 tablespoons olive oil and put back in the over till they’ve reached perfection another 25 minutes later. 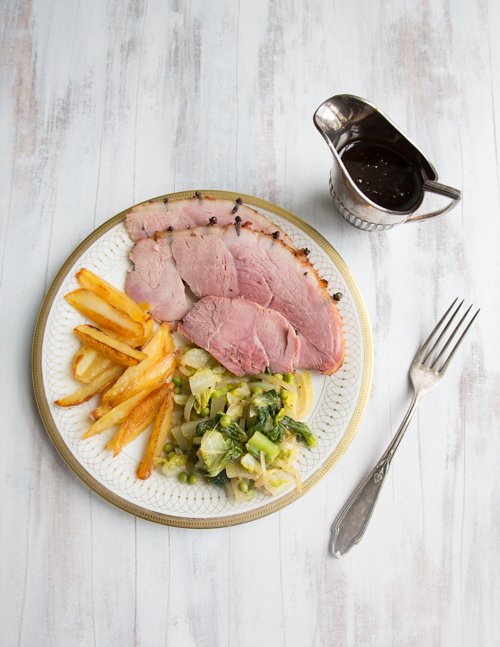 This recipe is a homage to my Luxembourg roots. At home, we’d often have “Ham, Fritten an Zalot” (ham, chips and salad) on Sundays. I’ve given this traditional Luxembourgish dish an English twist, by making this amazing baked maple cider ham, and serving it with roast potatoes and coleslaw. In the UK we use gammon, but you can of course make this with another piece of ham and use unsmoked meat if you prefer.

Soak the ham in a large pot of water overnight – this will reduce its saltiness. The next morning, discard the water and add the cider, onion, peppercorns, cinnamon and bay leaves. Top with water until the ham is just covered. Cover with a lid and bring to a boil, then reduce to a simmer and cook for 1 1⁄2 hours.

When the ham is cooked, take it out of the pot and place into a roasting tin. Keep the cooking liquid. Preheat the oven to 200°C.

Let the ham cool until it’s easy to handle. Remove the skin (if there is any), leaving a thin layer of fat. Score the fat to make diamond shapes and stud each diamond with a clove.

Mix all the ingredients for the glaze. Pour the glaze over the ham and add a ladle of leftover cider cooking liquid to the bottom of the pan.

Cook the ham in the preheated oven for 30 minutes. Keep an eye on the meat and add some cooking liquid if necessary.

Take out of the oven and let the ham rest for 10 minutes before carving. Mean- while, pour the roasting pan liquids into a saucepan, bring to the boil and add two teaspoons of cornflour. Stir and pour into a gravy boat.

Serve with coleslaw and roast potatoes. 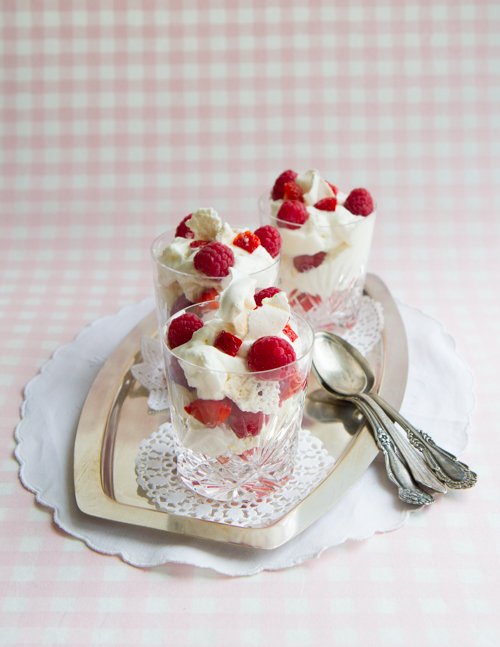 This dessert totally deserves its name: it looks a real mess, but oh my, what a yummy mess it is! Pillowy whipped cream, mixed with crunchy meringues and summery fruits – a real delight.  It’s a true British classic, as this dessert is traditionally served at Eton college’s annual cricket game. Assemble the ingredients just before serving, as that will ensure that the meringue stays crunchy.

Put the egg whites into a bowl and beat with an electric whisk until soft peaks begin to form. Still whisking, gradually add the sugar, a couple of spoonfuls at a time, whisking for  20-30 seconds between each addition. Continue whisking until the sugar has dissolved and the mixture is sti and shiny.

Put heaped spoonfuls of the meringue mixture onto a baking tray lined with baking paper, so that you get two large meringues.

Bake in the oven for 2 hours. Allow to cool completely before removing from the baking paper. (At this stage, the meringues can be stored in an airtight container for up to 5 days).

Whip the cream together with the sugar until it forms stiff peaks. Wash the fruit and cut the strawberries into quarters.

Put a spoonful of whipping cream into each serving bowl. Top with a spoonful of fruit. Break up the meringues and scatter some bits on the fruit. Layer the ingredients until the glass is full and finish with a topping of fruit and meringue.

For a true Eton Mess, mess up the presentation by vigorously stirring with a spoon.

TIP: For a super quick version, you can use store-bought meringues.  Or, you can prepare the meringues in advance; they will keep in a tin for up to a week.