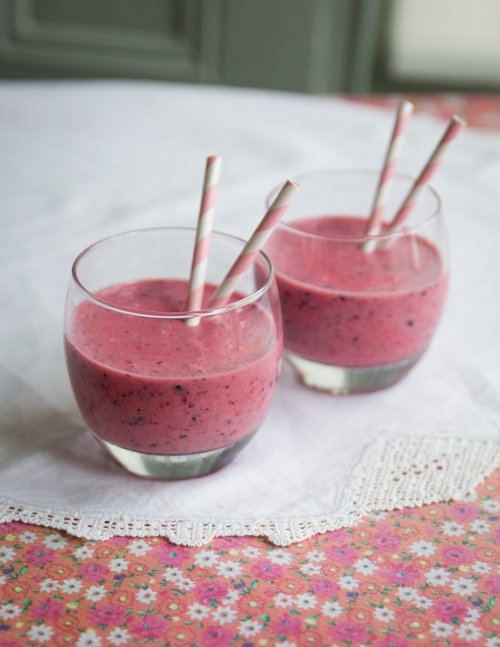 This is the perfect healthy start to the day. You can of course use fresh fruit, but the frozen berries give this drink a lovely texture. Feel free to play around with other fruit combinations,  such as strawberry and banana or pineapple and mango.

Put all the ingredients into a blender and blitz until smooth. 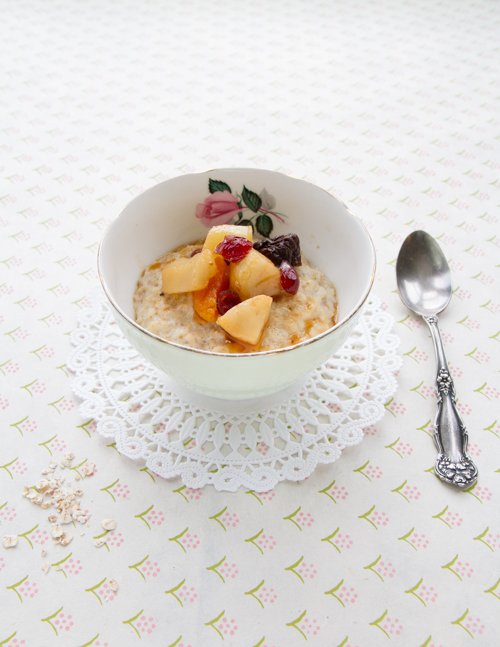 I can’t think of anything more comforting than starting the day with a bowl of porridge and a cup of tea. This is a bit of a posh porridge: I’m using classic Earl Grey tea to gently infuse the fruit and I’m enhancing the oaty porridge with a lovely vanilla dimension. Believe me, it’s heaven in a bowl.

Bring 400ml water to the boil, pour into a saucepan and add the teabags.

Cover and leave to soak for 5 minutes.

Meanwhile, peel the pears, cut them into quarters, core and cut into small, bite-sized chunks. Cut the apricots and prunes into halves.

Discard the teabags from the infusion, add the sugar, pears, apricots and cranberries. Simmer for 4 minutes on a medium heat, then add the prunes and simmer for another 3 minutes until the pears are tender. Take out the fruit with a slotted spoon and put into a bowl. Turn up the heat and boil the syrup for 8 minutes for the liquid to reduce.

Meanwhile, make the porridge. Put the oats into a saucepan, add the milk and sugar.

Slice open the vanilla pod, carve out the vanilla seeds and add both the pod and the seeds to the porridge. Bring to a boil, turn down the heat, and simmer for another 2 minutes, stirring all the time. Remove the vanilla pod and let the porridge rest for a minute before serving.

Serve the porridge topped with the stewed fruit and pour some of the syrup over it.

TIP: If you’re in a hurry, prepare the fruit the night before and reheat it in the morning, or just sprinkle your basic porridge with brown sugar and dust with some cinnamon. 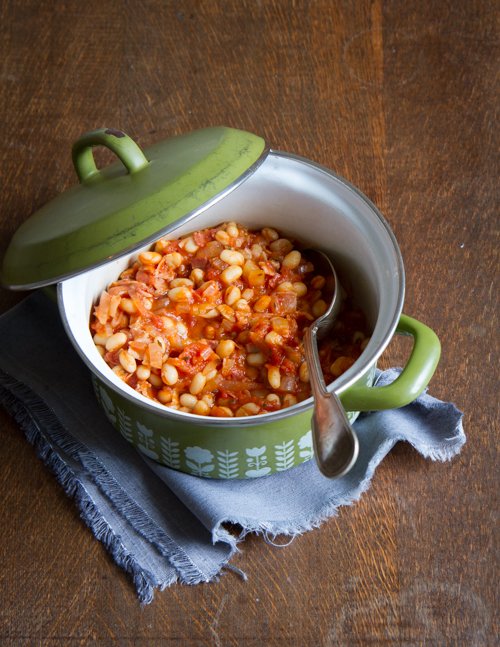 No full English breakfast would be complete without baked beans. But so many people dread these little buggers, associating them with tinned horror. Let me show you that there’s a world beyond these typical tinned beans – and convert you to become real baked bean lovers.

Add the chopped tomatoes, the Worcester sauce, barbecue sauce, mustard, sugar and thyme, and season with salt and pepper. Cook for  5 minutes, then add the haricot beans, cover and cook on a medium heat for another 4 minutes, stirring from time to time.

Uncover the beans, and cook for another 4 minutes.

TIP: If you can’t get your head and stomach around eating these for breakfast, you can enjoy them as a proper meal. I like them as filling in a baked potato or on toast. 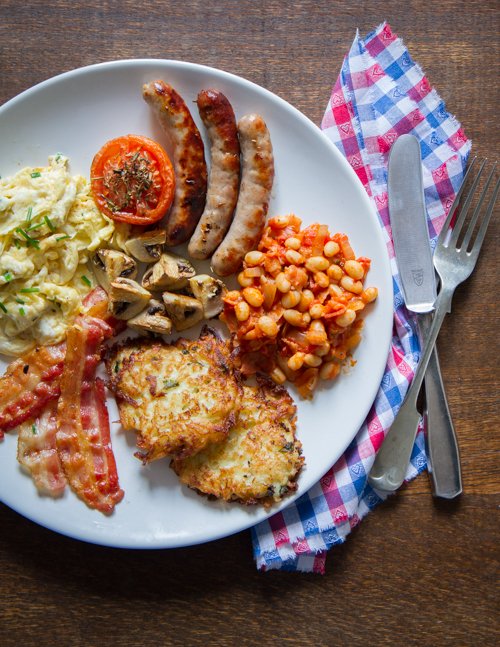 You don’t want to know how many calories this dish has... Still, it’s well fun to eat a Full English from time to time. I am making Gromperekichelcher for my version, since they’re a sort of Luxembourgish hash brown. Don’t be put off by the many elements this dish involves, if you take it step by step, it’s all manageable.

Start by preparing the Gromperekichelcher: peel the potatoes and onion, grate and put into a bowl. Add the egg, flour, salt and parsley, mix well and leave to rest for 30 minutes.

Meanwhile, prepare the rest of the ingredients. Grease a baking tray and arrange the sausages on it, pricking into each sausage with a fork. Cut the tomatoes in half, clean and quarter the mushrooms and put on the tray. Sprinkle some herbes de provence over the tomatoes, some rosemary over the mushrooms, and sprinkle both with salt. Set aside.

Crack the eggs into a bowl, add the cream and chives, mix well and season with salt and pepper. Set aside.

When the Gromperekichelcher are ready, stir the potato mix, as it will have gathered some water at the bottom of the bowl. Pour some sunflower oil into a frying pan, so that the entire bottom of the pan is covered in oil. Heat the oil and test if the oil is hot enough by dropping a tiny bit of batter in – if it starts bubbling, you’re ready. Drop 4 tablespoons of the potato mix into the pan to form 4 Gromperekichelcher, and fry on each side for about 2 minutes. Take out of the pan and put onto a plate lined with kitchen paper, to absorb some of the grease. Continue with the remaining batter and make another 4 potato cakes. When all the Gromperekichelcher are done, put them onto a second baking tray.

Pour the oil out of the frying pan and put back on the hob. You’ll need it for frying the bacon later.

Put the baked beans into a saucepan and heat up on a medium heat, stirring occasionally.

Meanwhile, fry the pancetta or bacon rashers for a couple of minutes in the frying pan, which you previously used for the Gromperekichelcher. When they’re starting to brown, they’re done – take out of the pan and distribute on 4 plates. Then, pour the egg mixture into the same frying pan, stirring for a minute or so, so that you get scrambled eggs. Divide between the plates.

Toast the bread. Take the sausage tray out of the oven and divide the sausages, tomatoes and mushrooms between the plates. Do the same with the Gromperekichelcher and baked beans. Serve with buttered toast.