What's in a name?

Because most of the Luxembourg western region is fertile agricultural territory it has been considered as “good", which translates to “gutt” in Luxembourgish, hence the name, the “Guttland”.

Guttland is also home of the famous "Peckvillchen", a whistle made from clay and shaped like a bird and a bestseller at the yearly "Emaischen" markets in the city centre and in the village of Nospelt. Ansembourg / © Thierry Dricot / LFT
© Alfonso Salgueiro / LFT
Nommerlayen / © Lars Remakel
© Sven Remakel
© Alpakatrekking
© Hotel Peitchelauer
The photos published on this site are subject to copyright and may not be copied, modified, or sold without the prior permission of the owner of the site in question. 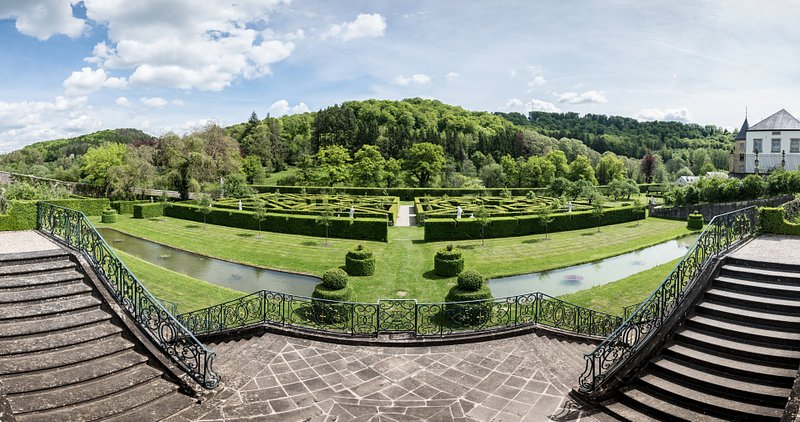 Ansembourg castle, which now belongs to a Japanese religious organisation, boasts magnificent gardens, which were laid out in 750. The gardens are adorned with statues, stairs and decorative fountains and they are open to the public. The “Hogwarts” of Luxembourg´s West?

In the early 1970s, the castle hosted a foreign studies programme for students from three American private Catholic Colleges. Students lived in the newly created dorms on the second floor, and took classes in Literature, Art History, Music Education, and Foreign Language.

During the European heritage days on 26 and 27 September visitors will have the rare opportunity to take a look at the inside of the castle. As mentioned in the title, it is also possible to rent it for private events.

Try the all castle tour features all of the 7-castles of the valley. But beware: after having seen all of them you will probably find it difficult to go back to your house or apartment. The cultural centre d`Millen  is an old mill that has been expertly restored and that now houses a historic sawmill, a museum of old crafts, an art gallery as well as a restaurant.

Their ghost tour introduces people to the history of the mill of the 14th century, followed by a smugglers tour deep in the forests and a visit to the "lost chapel" in the Beckerich forest. Finish the tour with a smuggler’s dinner inside the mill´s stables. 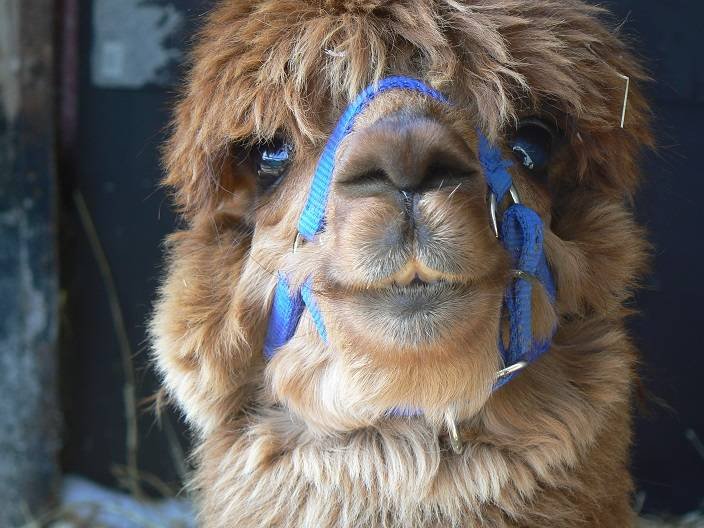 This farm in Hovelange is home to Galloway cattle, pygmy goats and alpacas. A range of activities are on offer, from feeding the animals, cleaning out the stable and going trekking with  “Wonder”, “Eldorado” or “Charly Brown”, to name a few of their seven alpacas.

If you want to spend one or two hours at the farm, this can be arranged at relatively short notice. If you want to visit with a larger group or do an alpaca trekking tour, it is best to contact the owners in advance. 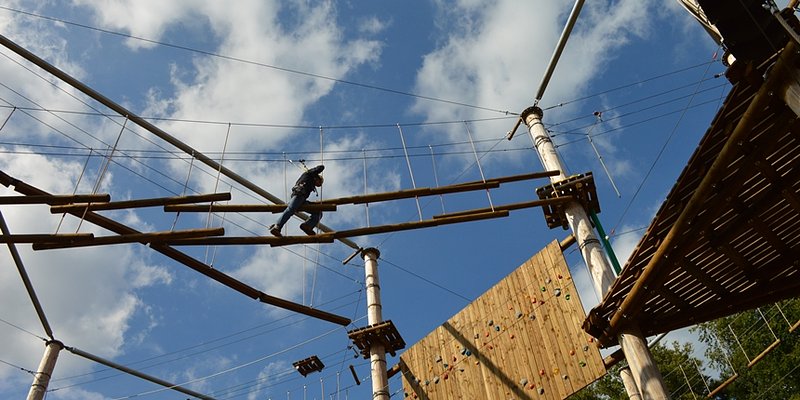 After finishing a first trial course,  Steinfort Adventure  offers 10 climbing parcours for different ages (4 + !) and levels of difficulty. Reservation in advance is obligatory.

The so-called “Auto-pédestres” are circular hiking trails, which can be found all over the country.

Of the 201 of these trails over 50 are located in the Guttland region and they are all described in a compact booklet, which is available in many bookstores in Luxembourg. The paths are marked with a blue triangle on a white background.

All information and data can also be downloaded at www.visitluxembourg.com or at tourisme.geoportail.lu.

The ”Schoenfels walk" is one of the trails and leads to a unique cave system in the forest between Mersch and Keispelt.

The Mamerleeën caves consist of natural sandstone caves as well as a large network of artificial tunnels located just below the ground. This set of caves and tunnels reaches up to the Huellay cave in the South and over one thousand metres in the North, towards Mersch. The starting point is close to the castle of Schoenfels. 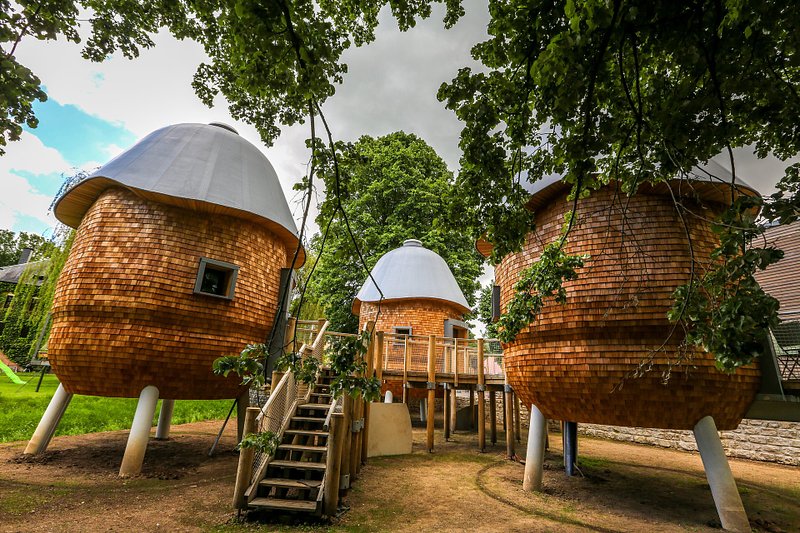 On the edge of the River Attert in Useldange sit the 3 mushroom houses of Hotel Peitchelauer in Useldange. On 19m2, they provide everything you need: A shower, WC, mini terrace, and a bedroom accessible via a ladder. 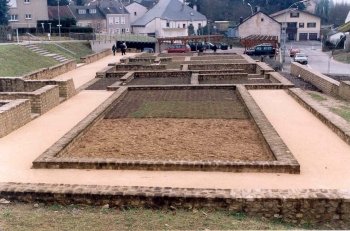 It was pure luck that the site was discovered when in 1990 a new residential area was developed and the construction company came across the remains of an old gallo roman manor house.

Considering the 50 (!) rooms on the ground floor alone and after finding precious jewellery, many coins, murals and ceramics it became clear that the former residents had a high standard of living.

The palace-like house was even equipped with a heating system and findings of glass indicate that at least some of the windows were glazed.

The palace is accessible throughout the year and it is one of the sites on the "Reimerpad", a cultural and historical circular walk that leads past the complex and connects it with other Roman sights in the area. Follow the green sign with the letter “R” and a roman bust with the typical laurel wreath on it. 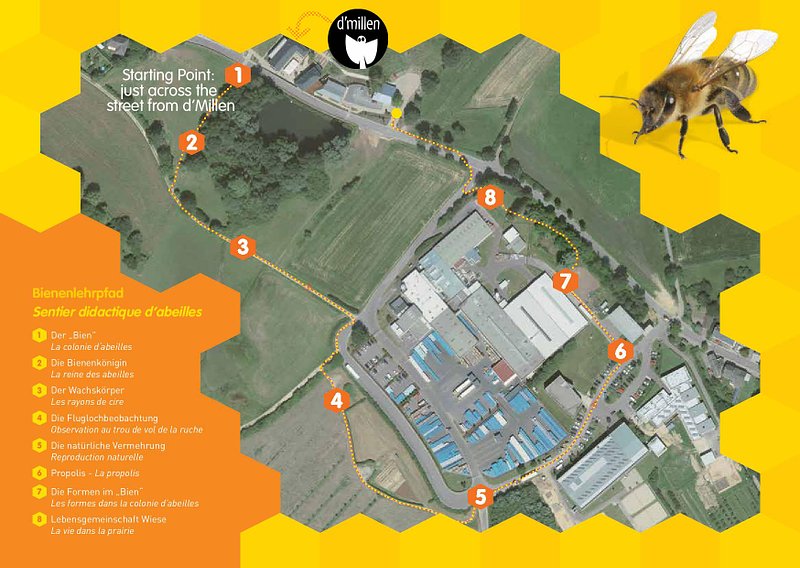 Designed for families & school classes, the bee trail in Beckerich has different stations where you can learn all there is to know about the importance of bees.

Make sure to grab a booklet (2€) at the start of the trail, so you can provide your kids with answers to their questions! 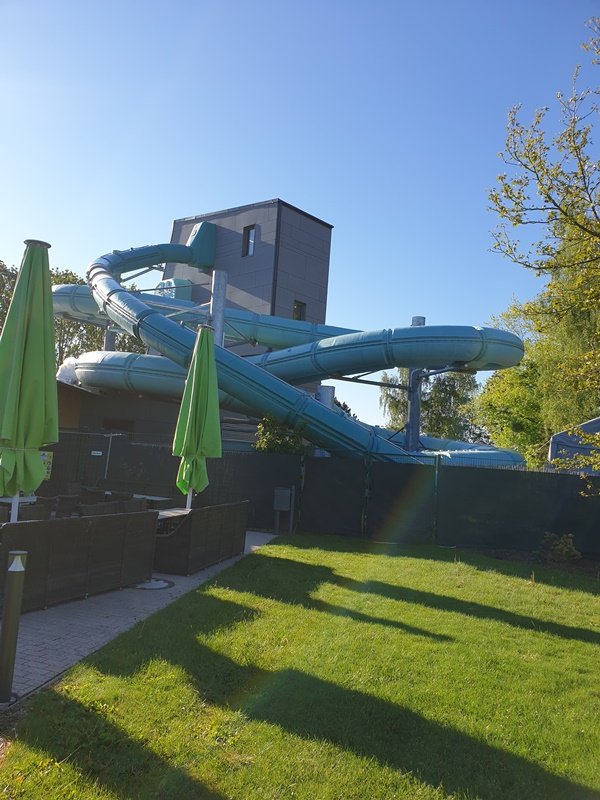 The indoor area of the Réidener Schwemm features a large swimming pool, a children's pool and mentioned water slides.

The outdoor area, which includes a lawn for sunbathing, a terrace and a wave pool, provides a lot of entertainment during hot summer days.

Discover the guided summer tours of the area and find out more about the event highlights taking place in the region and get inspired by day trip suggestions.

The star of the first edition is the bicycle.

Explore the hundreds of kilometres of cycling paths that meander through the Guttland region.

Please note that due to the COVID -19 situation sudden changes may occur, please double check the information on the respective websites.