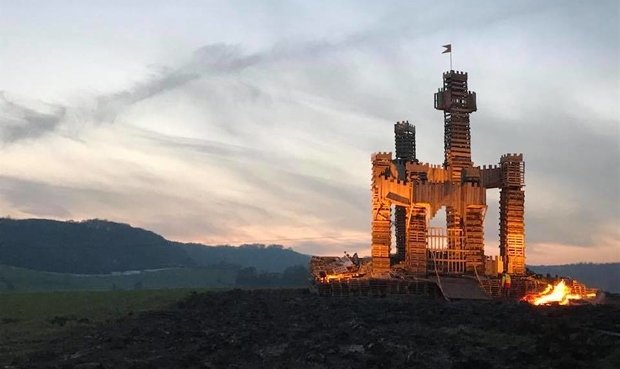 Have you noticed the huge wooden structures popping up in communes across Luxembourg? The preparations for the traditional "Buergbrennen" are currently in full swing.

Huge crosses and even whole castles made out of wooden palettes are currently dotting Luxembourg's fields. But while similar constructions might have pretty negative connotations in other countries, you are in no way in danger of spotting Grand Wizards or other nefarious characters in the Grand Duchy.

The large wooden pyres are being built in preparation for "Buergbrennen" ("castle burning"), a Luxembourgish folk tradition that is also still being practised in some Belgian and German towns the Greater region. Traditionally, Buergbrennen is celebrated on the first Sunday in Lent, exactly one week after "Fuessonndeg" (Carnival Sunday).

Bonfire Night in Ettelbrück
The photos published on this site are subject to copyright and may not be copied, modified, or sold without the prior permission of the owner of the site in question.

On "Buergsonndeg" ("Castle Sunday"), which will fall on 10 March this year, wooden castles and crosses are being set alight across the country to drive away the winter and ring in the spring time. Thousands of people flock to witness the traditional lent celebration each year and preparations often already start soon after New Year's.

The Buergbrennen bonfires are an age-old pagan tradition later incorporated into the Roman Catholic calendar. The fires represent rebirth, mark the end of winter and are meant to melt away the snow of the old year and herald the coming of a new season.

Bonfire Night in Vianden and Roodt (17.2.18)
The photos published on this site are subject to copyright and may not be copied, modified, or sold without the prior permission of the owner of the site in question.

According to linguists, the word "Buerg" in "Buergbrennen" actually has nothing to do with the Luxembourgish meaning of the word ("castle"), but can be traced back to the Latin word "burere", which means "to burn". While some historians believe that the Buergbrennen tradition evolved from the Romans' New Year's celebration (celebrated on 1 March, not 1 January), others say that the tradition goes back even further to a time before the Roman conquest.

Local youth organisations are usually in charge of building the pyres and source the materials from local residents and businesses. They use straw, dried-up Christmas trees, branches and wood, often in the form of wooden pallets, to construct their daring designs - basically anything that can catch fire. In some towns, the main event is preceded by a torchlight procession from the centre of the village to the location of the pyre.

Bonfire Night in Junglinster (18 February 2018)
The photos published on this site are subject to copyright and may not be copied, modified, or sold without the prior permission of the owner of the site in question.

While all of this might not seem very health and safety conscious, rest assured that the wooden constructions are lit under the watchful eyes of the local fire department. The actually lighting of the pyre is an honour often reserved for important local figures or a recently married couple.

Buergbrennen celebrations usually start in the afternoon or early in the evening. After the torchlight procession, the pyre is lit at nightfall.

Bonfire Night in Bonnevoie
The photos published on this site are subject to copyright and may not be copied, modified, or sold without the prior permission of the owner of the site in question.

For those of you who are new to the country, there is no occasion like Buergbrennen to get to know the people in your community, experience Luxembourgish traditions and indulge in the local cuisine. Traditional Luxembourgish comfort food is usually served up at these events: Grilled chicken and sausages, Ierzebulli (pea soup) and Bouneschlupp (bean soup) are typically washed down with a steaming mug of mulled wine or a pint of local beer.

If you want to find out where and when your local Buergbrennen celebration will take place this year, visit your municipality's website for more info.