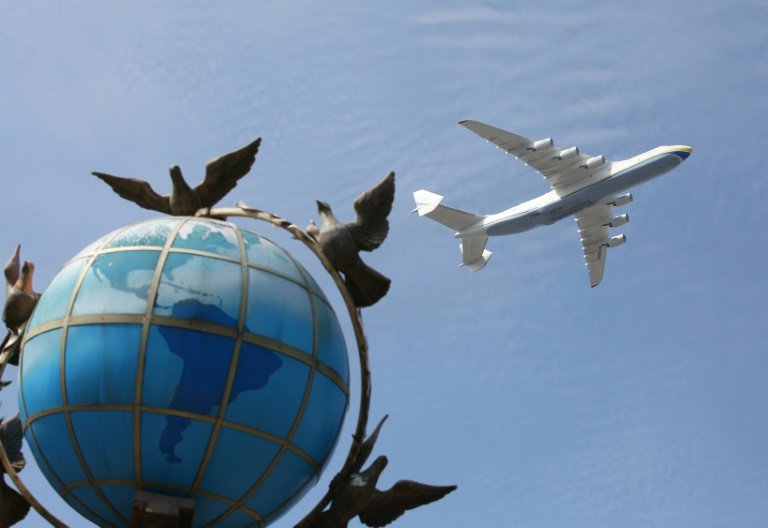 Airlines transported 4.5 billion passengers in 2019, belching out in the process 900 million tonnes of CO2, equivalent to two percent of total global emissions / © AFP/File

The dilemma: How can aviation fulfil its ambition of doubling passenger numbers while meeting its goal of reducing its massive carbon footprint?

Slashing pollution from the industry is among the major challenges facing the world as leaders meet later this month for a key climate summit in Britain.

Airlines transported 4.5 billion passengers in 2019, belching out in the process 900 million tonnes of CO2, equivalent to two percent of total global emissions.

Passenger numbers are projected to double by 2050, meaning a parallel doubling of CO2 if no action is taken.

While the sector has sought to increase carbon efficiency, it has increasingly faced pressure from environmentalists and social movements such as "Flygskam" ("flight shame"), which appeared in Sweden in 2018.

Between 2009 and 2019, carriers improved their energy efficiency by 21.4 percent, according to the International Air Transport Association (IATA). But that was not enough to prevent the sector's emissions from rising.

The IATA committed itself earlier this month to zero net emissions of CO2 by 2050, after having previously targeted a cut of just 50 percent.

A group representing European airlines, airports and aerospace companies has made a similar commitment.

At state level, the European Union hopes to cut emissions by 55 percent compared with 1990 levels by 2030, aviation included.

The United States intends to slash the sector's emissions share by a fifth by the end of this decade.

The European group of airlines, airports and aerospace companies hopes half the emissions targets can be met with more fuel-efficient engines, the emergence of hydrogen and electric propulsion, and a better management of air traffic.

But the IATA says such measures would contribute to just 14 percent of the effort.

Plans to reach the net zero target also rely on carbon offsetting schemes, such as planting trees, which NGOs say do not address the problem.

The IATA hopes to accomplish two-thirds of its emissions reductions by using SAFs -- non-conventional fuels derived from organic products including cooking oil and algae.

The European Commission will require that SAFs account for at least two percent of aviation kerosene by 2025, rising to five percent by 2030 and 63 percent by 2050.

Aviation giants Boeing and Airbus say their planes will be burning 100 percent SAFs by the end of this decade.

SAFs, which is four times more expensive than kerosene, accounted for less than 0.1 percent of the fuel used in aviation in 2019.

The United States is proposing a tax credit to encourage SAF use while the EU wants to put a new levy on kerosene for flights within the 27-nation bloc.

Biomass fuels are a limited resource.

"We have estimated that by 2050, advanced biofuel from residue (will) allow for covering (just) 11 percent of aviation's needs," says Jo Dardenne of the European NGO federation Transport et Environnement (T&E).

The aviation sector is also betting on synthetic fuels, or e-fuels, made with hydrogen produced from renewable sources of energy and with CO2 captured from the atmosphere.

E-fuels are supposed to be the main type of SAF in the future.

But Timur Gul, head of energy technology policy at the International Energy Agency, says replacing just 10 percent of oil-based jet fuel with e-fuels would require the equivalent of electricity production from Spain and France combined.

Dardenne says the technologies being considered to reduce emissions require a lot of energy. What is needed, he says, is to "reduce demand" -- meaning to fly less.