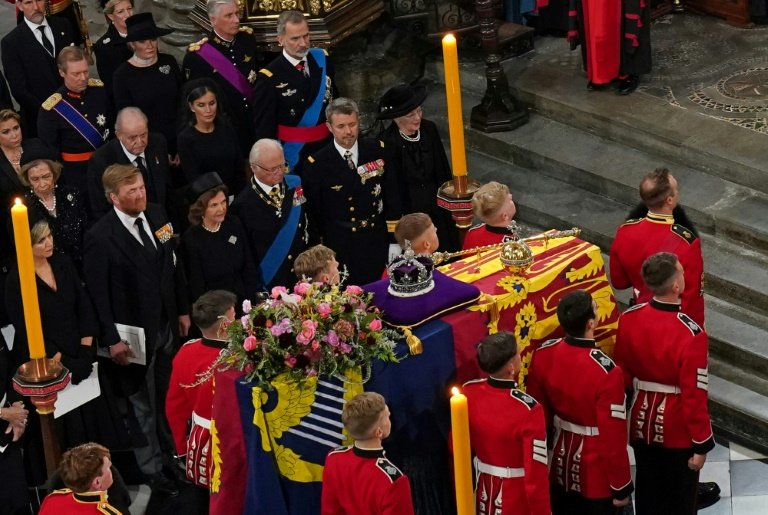 Spain's disgraced former king Juan Carlos I and his successor attended the funeral of Britain's Queen Elizabeth II on Monday, in a sign of public rapprochement.

Juan Carlos abdicated mired in scandal in 2014 and went into self-imposed exile in the United Arab Emirates in 2020 against a background of investigations into his fortune.

But the former king and his estranged wife Queen Sofia and King Felipe VI and his wife Queen Letizia sat side by side at Westminster Abbey for the queen's state funeral.

The father and son were last seen together in public in January 2020 for the funeral of a sister of Juan Carlos, an aunt of the king.

The two couples arrived separately at the abbey but were seated together in a section, close to the coffin, reserved for royal families.

The former king was invited by the British government, prompting officials in Madrid to insist that Spain's official representative was Felipe.

"The head of state is clearly King Felipe VI" while the former monarch "is in London in response to an invitation in a personal capacity", Spain's Foreign Minister Jose Manuel Albares told reporters.

Juan Carlos and the late queen were distant cousins -- their shared great-great grandmother was Queen Victoria -- and Felipe called the monarch "Aunt Lilibet".

Juan Carlos was for decades revered for his role in steering Spain to democracy following dictator Francisco Franco's death in 1975.

But damaging scandals over his finances and private life forced him to abdicate after nearly 40 years on the throne.

Since he ascended to the throne, Felipe has distanced himself from Juan Carlos in a bid to try and restore the monarchy's image.