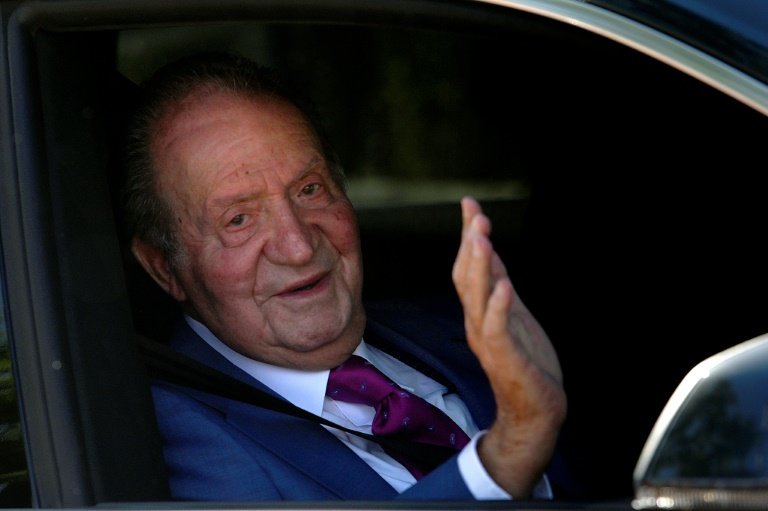 Scandal-tainted Spanish ex-king Juan Carlos I visited his son and current monarch Felipe VI in Madrid on Monday, during a controversial trip home after two years in self-imposed exile.

The meeting came at the end of the former king's first trip back to Spain since he moved to the United Arab Emirates in August 2020, following a string of financial scandals that damaged to his reputation.

Once revered for his role in easing Spain's transition to democracy following decades of dictatorship, the scandal forced Juan Carlos to abdicate in 2014, after nearly 40 years on the throne, and then to leave the country.

The 84-year-old former monarch flew into Spain on May 19 for a three-day regatta in the northwestern region of Galicia featuring his yacht the "Bribon". He arrived on Monday morning at the royal palace in Madrid directly from Sanexo, in Galicia.

The ex-king had not seen his estranged wife, Queen Sofia, or his son since he fled to the UAE, dogged by allegations of corruption.

In a bid to try and restore the image of the monarchy, King Felipe VI has sought to distance himself from his father.

He has not visited him in exile and, officially, did not speak to him by phone until last week, when they arranged for Monday's private family visit.

Juan Carlos was scheduled to leave for the UAE later in the day, the palace said.

Spanish prosecutors closed their probes into Juan Carlos I's financial affairs in March, in part because he was immune from prosecution until his abdication and because the statute of limitations had expired.

That decision triggered anger in some quarters, which was only exacerbated by the ex-king's return to Spain.

"I think king Juan Carlos wasted the opportunity during this visit to give an explanation and apologise," Isabel Rodriguez, spokeswoman for the Socialist government told Spanish public radio RNE on Monday.

Juan Carlos made only brief, off-the-cuff remarks during his visit to Sanexo.

"Explanations? What about?" he replied curtly when asked by journalists outside the yachting club if he would try to clarify the situation when he met his son.

In March 2020, King Felipe ended his father's annual palace allowance, worth a reported 200,000 euros ($210,000), and renounced his own claim on what he would have inherited from the king emeritus.

Last month, he and the government took steps to increase the transparency of the monarchy, via a decree requiring the palace to publish its budget and make tenders public.

It also means the royal accounts will be audited, that senior palace officials must declare their personal wealth on taking up and leaving a post, and that gifts given to royals will be catalogued.

"Felipe VI is doing a great job to restore transparency, which is essential for any state institution," Rodriguez said.