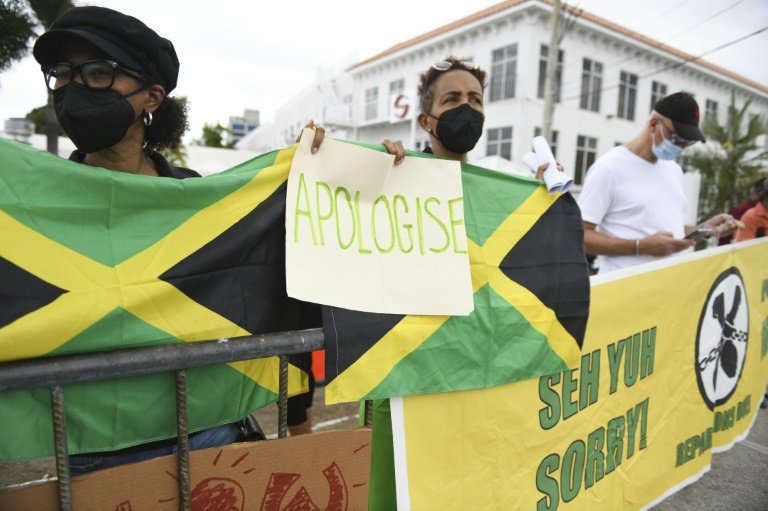 In Jamaica, Prince William and his wife Catherine faced protests for the royal family to apologise for slavery and pay reparations / © AFP

Prince William's trip to the Caribbean was meant to help Commonwealth countries where his 95-year-old grandmother is also head of state celebrate her record-breaking 70 years on the throne.

But what were designed to be carefully choreographed photocalls and public appearances for Queen Elizabeth II's Platinum Jubilee did not go entirely to plan.

Instead, William, 39, and his wife Catherine, 40, faced calls to apologise for the slave trade that help make his ancestors' fortunes and to atone for the sins of the past.

The Bahamas National Reparations Committee said Britain's royals had benefited from the "blood, sweat and tears" of slaves and called for reparations. 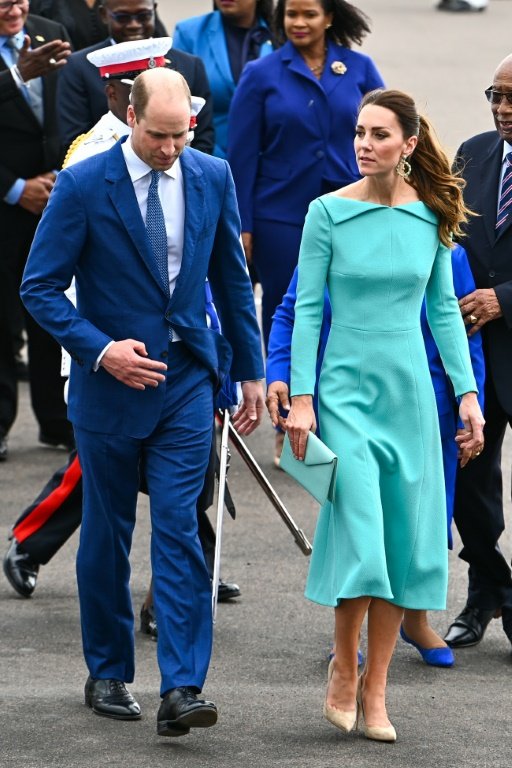 The British royals' pivotal role in the slave trade goes back to the 16th century, when the first queen Elizabeth sponsored one of its first major proponents, John Hawkins / © AFP

Colonised lands and people had been "looted and pillaged" by the UK monarchy over centuries, leaving them under-developed in the modern age, it added.

In Jamaica, meanwhile, Prime Minister Andrew Holness pointedly told the Duke of Cambridge -- as he is formally known -- in front of television cameras that the nation was "moving on" as an independent country.

By doing so, he gave William's father Prince Charles another indication of what he could face when he is king, after Barbados became a republic last year.

On the streets of Jamaica's capital, Kingston, the Rastafarian dub poet Mutabaruka said ditching the queen would make little difference to ordinary people.

"Making Jamaica a republic will not change the price of food but it has a psychological implication on the mind and the consciousness of the people," he told the Jamaica Observer newspaper.

"It has an internal significance to how we view ourselves."

Shop owner Tameka Thomas put it more bluntly. "It's time to change now. Queen Elizabeth is queen in England, not Jamaica. She should stay in England," she told AFP.

British royals' pivotal role in the slave trade goes back to the 16th century, when the first queen Elizabeth sponsored one of its first major proponents, John Hawkins. 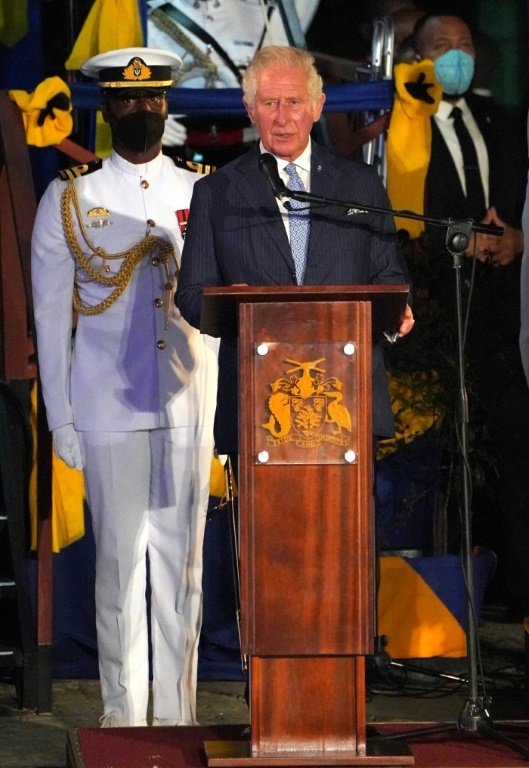 King Charles II in the 1600s encouraged the expansion of the trade and with his brother, the future king James II, invested private funds in the Royal African Company.

The company transported hundreds of thousands of men, women and children from the continent across the Atlantic. Many were branded with the company's initials.

King George III's son, who became king William IV, opposed slavery abolitionists but was unsuccessful. Britain banned the transatlantic slave trade in 1807 and in all its territories in 1833.

Modern royals have addressed slavery in the past, most recently in Barbados, when Charles called it an "appalling atrocity... which forever stains our history".

In Jamaica, William echoed his father's words, expressing his "profound sorrow" and calling the practice "abhorrent". "It should never have happened," he said.

But so far, no formal apology has been made.

The visit came as Britain increasingly confronts its colonial past, in particular its memorials to historical figures. 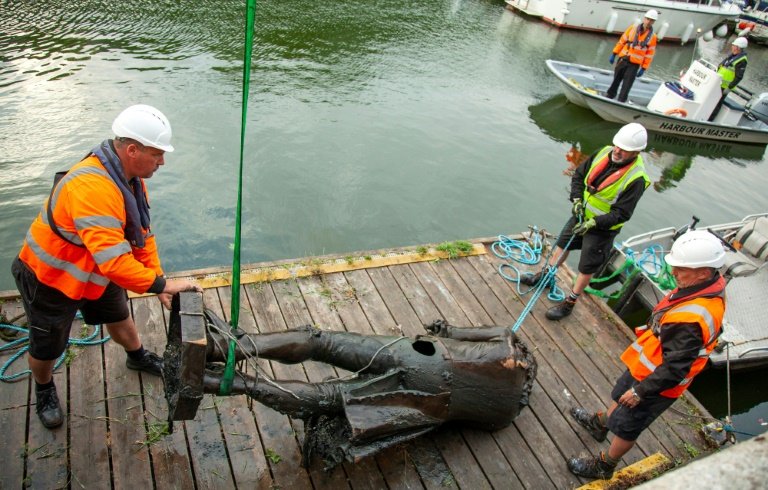 Anti-racism protesters toppled the statue of a 17th century slave trader and threw it in Bristol harbour, as part of anger at Britain's colonial past / © BRISTOL CITY COUNCIL/AFP

Last December, four people were cleared of criminal damage after a statue of a 17th century slave trader was toppled during a Black Lives Matter anti-racism protest in Bristol.

Just this week, a Cambridge University college was told its bid to remove a memorial to a donor who had links to the Royal African Company was unsuccessful.

For Olivette Otele, professor of the history of slavery and memory of enslavement at the University of Bristol, the protests were "not unexpected".

She noted various contentions foreshadowed the visit, including the global Black Lives Matter movement, the debate back home, and anger at treatment of Caribbean migrants who moved to Britain after World War II. 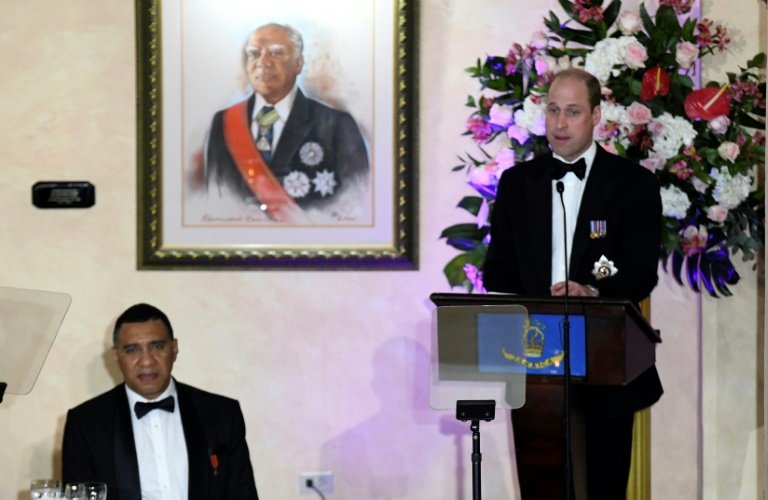 Thousands of the so-called "Windrush generation" were later wrongfully detained or deported, despite having arrived legally.

"Apologies have never been enough. They are an important step," said Otele.

"Nowadays people want to see more. They want to see change. They know there's a relationship between past and present."

But the royal family and the British government had not made that link and were not part of any meaningful conversation about how to make amends, she added.

One of numerous critics writing in the Washington Post called the visit a "colonial tour" and outdated charm offensive that was "more offensive than charming".

Otele, a vice-president of the Royal Historical Society, said the royals "need to read the room".

"Things are changing. If it (the visit) is about keeping these countries and the queen as head of state, they might not have understood there is a broader debate there," she noted.

"It's about inequalities, about poverty and the legacies of the past.

"As wonderful as the jubilee might be here, it seems awkward to expect people to celebrate without looking at what's happening there."