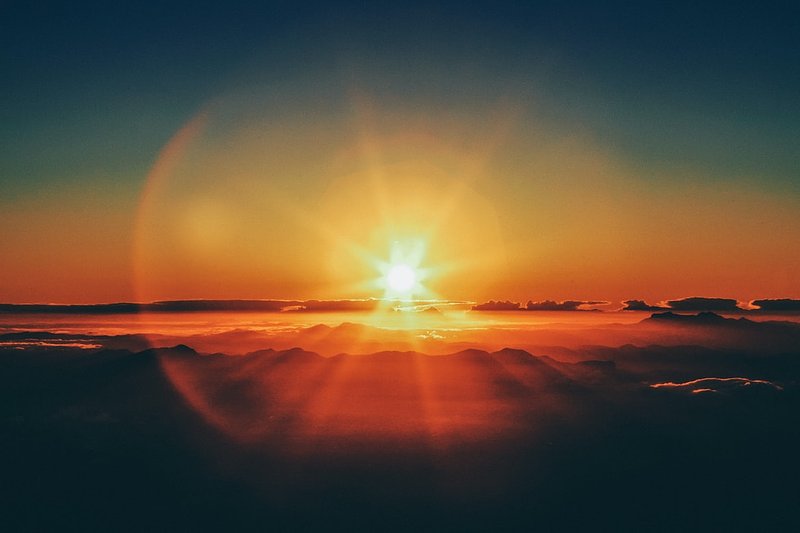 Sun woke with a start.

A few moments ago, Sun was gamboling around the Alps. Sun had been climbing mountainous peaks, traversing gulleys and laying down some Butter Nose Rolls off piste.

The alarm sounded not unlike a bin lorry reversing into the side of Sun's head.

January tended to be one of the easiest months of the year for jolly old Sun. These four weeks were almost the quietest Sun would enjoy. Most people thought that Sun slacked off in April. But that was far from the truth. April was rainy, yes. Plenty of Rain. But Sun needed to break Cloud's spells and bring back the ooohs and aaahhs.

In January, Sun left much of the leg work to Cloud, Snow, Wind, Frost and Fog. Rain hot-desked in January. And left muck wherever they went. Sweet wrappers, coffee cups. Dowzens of nearly clean spoons. Licked to an almost shiny.

Sun had tapped the snooze button for the 3rd time already this morning. Sun's PB was nine snooze's.

Sun's day had been mapped out by the office. Sun needed to see the nutritionist and discuss the weight loss plan. Sun was then on to the publicist to discuss some comments on tabloid rumours and front page splashes.

Sun rubbed their aching temples. Scratched around the nether regions. Rolled over and pulled the duvet tight and taut.

There was a media engagement at noon. 6 hours away. Sun would just get a few more minutes.

If Sun just closed his eyes for a little while more, maybe he could get to the Apres Ski bar in his dreams...and, who knows, perhaps Rainbow would make an appearance.

This time, Sun simply picked it up and smashed it against the wall.

Looking at the circuits and batteries...the lame little springs and the fading lights, Sun thought that he may just need to pull a sickie. He thought about the last time they had done this.

It had been a while.

Sun had the squits in November and a touch of Flu in December.

Headaches, unless migraines can be seen off with paracetamol.

Stomach cramps, though, well, they carried the threat of incapacitating pain and the extras of what cramping stomachs can bring.

Yep, a tummy bug it was.

Sun grabbed his phone. Brought up his messaging app.

Threw out some words. A couple of deliberately misspelled words, you know to make it seem legit...and sent it to his agent.

That, Sun thought, would buy a couple of days.

Sun was asleep before Sun's head hit the pillow.