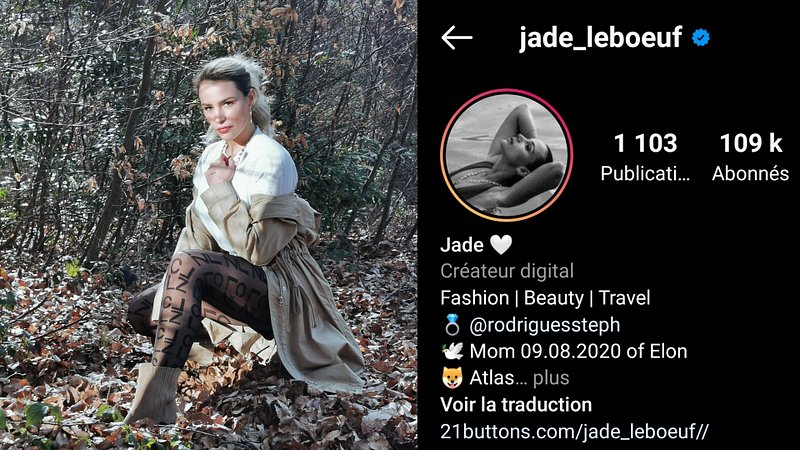 With close to 110,000 followers, Jade Leboeuf is one of Luxembourg's most popular influencers.

Leboeuf moved to the Grand Duchy one year ago. The daughter of footballer Frank Leboeuf has settled well in her new home, where she also gave birth to her first son Elon.

Popular on social media platform Instagram for her beauty tips and life guides, the 30-year-old has managed to accumulate close to 110,000 followers.

Leboeuf's husband Stéphane Rodrigues has also become an influencer over the years. He first came into the public eye eight years ago by taking part in the French reality TV show Secret Story.

Jade Leboeuf first worked as a model and aspiring actress in the United States before making the online platform her full-time job.

I don't have any fixed limits for what I show on my platform. Sometimes it's personal, sometimes it's more about making others feel better.

"I never intended to make a career out of it. I was focused on modelling and sophrology, in which I hold a degree. But then, more and more people began contacting me on social media asking for advice, and my account has developed and grown ever since."

The couple's business model works well at the moment. Every week, they advertise new products, including Luxembourgish ones, on their accounts through images and videos. "We establish a tariff based on demand".

Both currently enjoy the proximity between the Grand Duchy and Paris. Leboeuf often makes short-term trips to the French capital to take part in photo shootings.

In August 2020, the influencer gave birth to her first child. Elon has since also been portrayed on social media, allowing followers to watch the boy slowly grow up. "I don't have any fixed limits for what I show on my platform. Sometimes it's personal, sometimes it's more about making others feel better. I tend to keep intimate family moments for myself to enjoy and out of the public eye."

New projects on the horizon

When it comes to her spiritual content, Leboeuf emphasises positivity above all. "I want to show people that they are not alone. Especially motherhood has become an important topic for me. My community helps me feel less alone as well."

Although the Grand Duchy only plays a minor role in her online content, followers can nevertheless admire the occasional glimpse of a Luxembourgish landscape on Leboeuf's Instagram page.

At the moment, the influencer is working on a new project. Together with another couple, she and her husband are looking to set up a food-truck. However, the project is still in its early stages. More to be revealed soon...