They are young, have just started on the job market and do not want to spend tremendous amounts of money on their accommodation. More and more Luxembourgers are moving to Germany, Belgium or France for economic reasons.

The phenomenon began in the early 2000s when Luxembourgers started moving to neighbouring countries, pressured by soaring property prices in the Grand Duchy - but it is not an easy decision to make.

In 2019, the Interregional Employment Market Observatory (OIE) counted more than 9,930 frontier workers of Luxembourgish nationality residing in Germany, Belgium or France and working in Luxembourg. 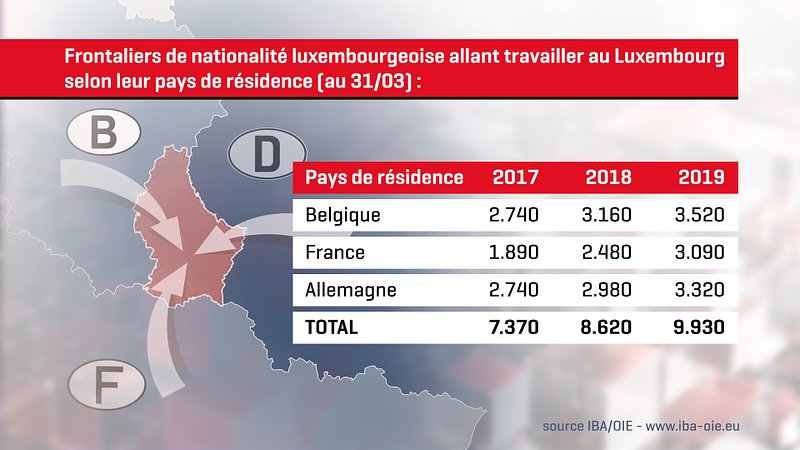 Patrick Azevedo is part of this growing community, which has become an "atypical" group of cross-border workers. As an HR consultant and coach he has lived in Kanfen in Moselle since 2019. After considering renting in Luxembourg, he quickly became discouraged and turned to the French border area, not far from his home town Dudelange.

"It is very difficult if you don't have anything"

By opting for an apartment of 70 square meters in Kanfen, Patrick made a choice that allows him to keep financial ease with a Luxembourg salary. His monthly loan repayment drafts are lower than what he would have paid, for example, for a rented room in a shared apartment, often around €900 in Luxembourg-city.

"If I'm asked if I would have preferred to stay in Luxembourg, the answer is clearly yes," explains the HR consultant. "Now, does it bother me that I had to leave Luxembourg? Not necessarily."

Many young Luxembourgers find themselves in a situation comparable to that of Patrick when they enter the labour market. Some prefer to stay with their parents to save a little extra money, others choose to go abroad. "This is a question that does not only concern young people but society in general," believes Patrick. "If Luxembourg wants to grow, we must be able to accommodate people, including "starters". If you don't have something, some heritage or so, then there's no way to enter the market. It is very difficult."

When this phenomenon first appeared two decades ago, Luxembourgers tended to choose Germany as their country of residence. Since 2012, this trend seems to be changing in favour of the Belgian and French border regions, where the annual growth rates of atypical border workers are 27% for Belgium and 15% for France. It is only 10% for Germany.

As for Perl in Germany, the phenomenon has grown to such an extent that the municipal authorities have changed the conditions for making residential building land available since 2009. In order to preserve "the identity of the neighbourhoods”, land is prioritised for "local candidates", including people who are older than 18 and can prove that they have lived in the municipality for a period ranging between 3 to 10 years.

These are regulations that, in a way, relegate Luxembourgers to the back, despite their strong purchasing power.