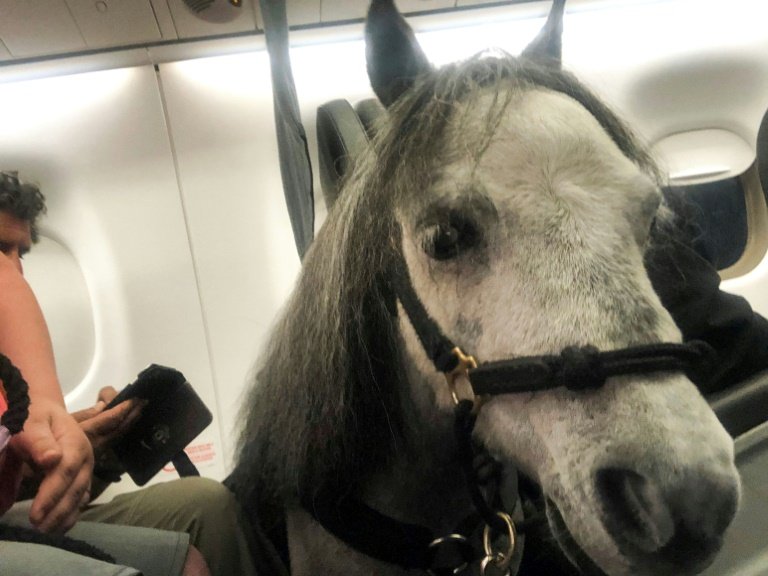 Passengers on a recent American Airlines flight to Omaha, Nebraska, were shocked to find themselves sharing the aisle with a miniature pony.

Flirty, who is the size of a big dog, joined her owner on a flight from Chicago to Omaha (a one and a half hour journey) as a service animal.

‘I don’t know what I would do without her, even if I was cured today,’ Flirty’s owner Abrea Hensley told a local paper. ‘She’s my constant companion’. Hensley suffers from anxiety, and Flirty is her emotional support. The little stallion even reminds her to take medication.

Passengers and crew members on the American Airlines flight were intrigued by the 135-pound service animal. ‘Even the pilots had to come out and say ‘hi,’’ Hensley wrote on Instagram.

‘We recognize the important role trained service dogs, cats and miniature horses can play in lives of those with disabilities, including, but not limited to visual impairments, deafness, seizures, and mobility impairments,” a spokesperson explained. ‘They are welcome in the cabin, at no charge, if they meet the requirements.’

However, Hensley says she probably won’t be purchasing another plane ticket anytime soon – even though Flirty wasn’t horsing around. In fact, she was quiet and took a long nap, but ‘couldn’t help jostling seat of the person in the last row of first class every time she moved’.

‘It’s just too difficult to make sure Flirty doesn’t inconvenience other passengers,’ the owner of the young mare claimed.