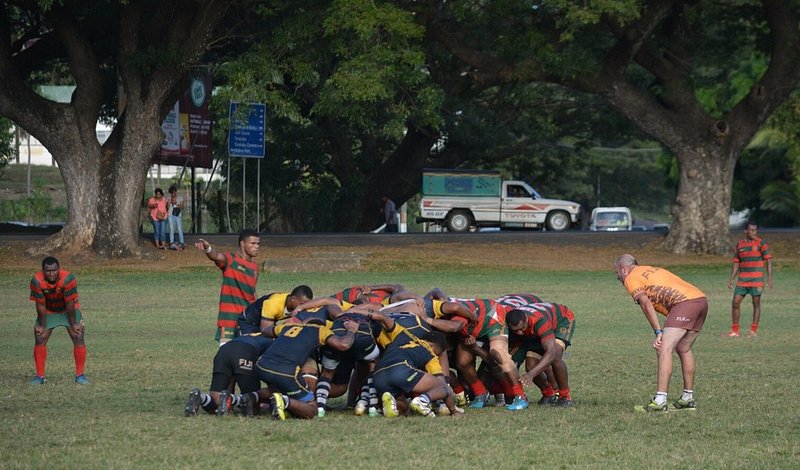 Players and staff from RC Luxembourg have been to the other side of the planet to support Rugby based projects this summer.

The Pacific paradise of Fiji was the destination for Rugby equipment donated by members of the club.

The initiative was part of the club’s “social programme” which promotes sports medical knowledge in Luxembourg and worthy causes overseas. First to arrive was U18 Morgan Lowe who travelled to help projects set up by Barefoot World Wide.

Based in Fiji’s second city of Lautoka Morgan is staying 6 months with local families under the supervision of Sireli Bulicokocoko former British military Special forces and performance coach of Fiji’s first World Cup 7s winning team. Morgan transported equipment for local clubs and has been training with a U19 squad. In addition he has been helping harvest food on the family farms and even building flood defense walls to combat raising sea levels.

RCL development officer Paul Sweetnam was also in Fiji, with his family to check on Morgan and to investigate how the club and Barefoot can support community projects. Barefoot has been inundated with donations from across Europe, the challenge now is to find a storage and transport solution to assure the donations reach the projects. The link with Kenya has been established longer and is working well, but Fiji is so much farther away which is the main way issue.

The way the donations are managed “on the ground” is of particular interest to Sweetnam who has qualifications in Human Geography and overseas development. Some of the boots we have donated are brand new and like anywhere in the world they have value and become a currency of their own.

The club decided that, where possible boots will not be given to individuals but only be given to a team so it has a shared ownership, which removes personal jealousy or temptation to sell. Sweetnam also maintains that his should not be seen as wanting to give something for nothing, so the equipment is often a reward for excellence.

"For example a set of boots was donated to a club set up in an area of Lautoka which has high crime. As the club has grown and become more successful crime rates have dropped, local police have credited the work of the club in part to this drop in crime" Sweetnam says. Again RCL must be sensitive to the local shops who sell boots and employ thousands of people across Fiji.

Sweetnam also met with local referees and was invited to officiate the regional Cup semi final between the Fijian Army and Lautoka University. “We don’t want to flood the market with cheap boots but on the other hand I witnessed adult front row players wearing running shoes. This is a player welfare issue here so one pair of boots would have helped the safety of players from both teams”

The second project being supported is an academy, based in the capital Suva, set up by former Leceister Tigers player Seremaia Bai. The academy aims to help young players from less privileged backgrounds. “I was a professional player for 16 years and I promised myself when I retired I would return home to help kids from a similar background to mine,” Seremaia says of his experiences. "I had to train at 4.30am each morning before working in the fields from 6.30am, I then went to school and trained again when I got home”. Seremaia has the simple promise to make the boys better people when they leave the academy than when they arrived. Despite this modest aim, in just two years over a dozen of his pupils have secured playing scholarships in Australia New Zealand and Japan.

“Seremaia is an inspirational man who, with a little help from us can change so many peoples lives, we have seen this in Luxembourg when four of his students came to study in the Grand Duchy. Two of them have now passed entrance exams and basic training for the British Army and Navy. The experience they will gain and the money they earn will have a positive impact on their and their families lives" said Sweetnam in praise of the achievements so far.

“The minimum wage in Fiji is €1,25 an hour but boots, equipment or even petrol are similar to European prices. Giving pairs of boots and equipment is a great start but we also need to support the individuals who give up so much of the free time to help others. This could be financially to pay for transport or pitch rental or to find people to help with washing clothes or the ubiquitous administrative burden", Sweetnam observes.

"The people we met may have been half a planet away from Luxembourg but what we had in common far outweighed what we didn’t" was the measured quote from RCL's representative. Sending equipment by ship may be a cheaper option in the long run but the club wants to encourage individuals to visit the projects they support and personally deliver the equipment. Sweetnam suggests that this "personal contact will make the links stronger. The flight ticket is expensive but you will be paid back with a thousand smiles and memories that will last a lifetime".

If you are traveling to Fiji, Nairobi, Cape Town, Zimbabwe or Cameroon, RCL would like to hear from you and will pay for an extra piece of luggage so you can donate much needed boots, sports bras and general sports equipment.