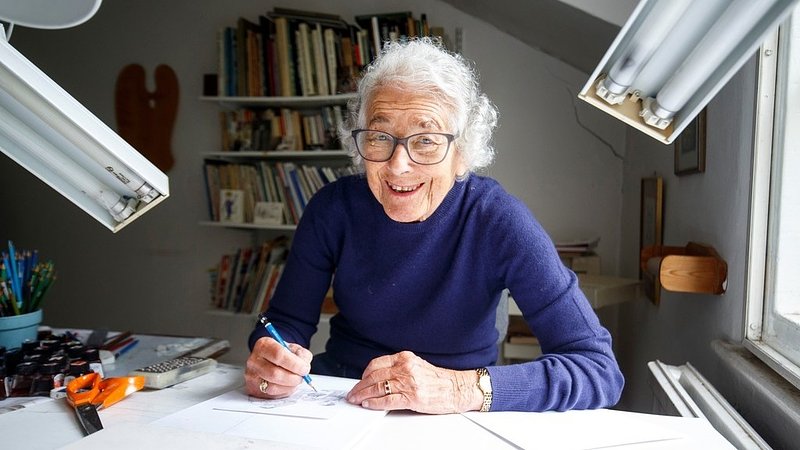 British writer and illustrator Judith Kerr, whose death at 95 was announced on Thursday, captivated young readers around the world with her tales of a fluffy tiger coming to tea, a trouble-prone cat and her own family's flight from Nazi Germany.

Kerr's other work include enduring picture books such as the Mog series, and the semi-autobiographical When Hitler Stole Pink Rabbit.

With curly hair and a mischievous smile, the petite Kerr worked well into her 90s, saying she even picked up the pace in old age, drawing inspiration from events in her own life to become one of Britain's best-loved children's authors.

Kerr was born in Berlin on June 14, 1923, fleeing Germany 10 years later after a policeman tipped off her father Alfred Kerr, a prominent Jewish writer, that the family was in danger from the rising Nazi power.

"My father was ill in bed with flu and this man rang up and said: 'They are trying to take away your passport, you must get out immediately'," she recalled in an interview with AFP in June 2018.

He took the first train to Switzerland and his wife and two children soon joined him. A day after their escape, the Nazis took power.

The family moved on to Paris before settling in London in 1936.

Hitler and a rabbit

This story is loosely recounted from a child's perspective in Kerr's semi-autobiographical novel "When Hitler Stole Pink Rabbit" (1971) in which the fleeing girl can only take one toy and so leaves behind a favourite rabbit.

Kerr, who started drawing at a young age, credited the success of the book with being "published at a time when the Germans hadn't really managed to talk to their children about the past".

But she is better known for "The Tiger Who Came to Tea", released in 1968 to become a global classic of children's literature, with at least five million copies sold and published in more than 30 languages.

Kerr's first picture book, it tells of a girl and her mother interrupted at teatime by a huge, fluffy tiger who eats everything in sight before leaving again.

She was able to write up the story -- a bedtime favourite of her young daughter -- while her husband was at work and their two children at school.

The fictional family mirrors her own at the time, the illustrations featuring the yellow and white kitchen cupboards of their London home.

Kerr used tigers at a London zoo as models for her feline creation.

Next was "Mog the Forgetful Cat" (1970), the first in what became a 17-book series about the antics of a mischievous, egg-loving moggy inspired by her own pet.

"Goodbye Mog" (2002) was meant to be the last offering -- broaching the subject of death with the much-loved cat departing for heaven. But supermarket chain Sainsbury’s persuaded Kerr to produce one more in 2015: "Mog’s Christmas Calamity".

Proceeds of the last book were for Save the Children's work on child literacy, and a TV advert was the first to feature Mog in animation with Kerr herself also making a cameo appearance.

In her illustrated story "My Henry" (2011) -- for children and adults -- an elderly lady fantasises about adventures with her late husband, such as climbing Mount Everest, hunting lions, and riding dinosaurs.

Kerr dedicated the book to her husband Thomas Nigel Kneale, a respected screenwriter who died in 2006. The couple met at the BBC, where they both worked, and married in 1954.

Commenting on the book in 2011, The Telegraph wrote: "For all the depth of underlying emotion, there's a celebratory feel to it, an unfeigned lightness of spirit that, throughout her life, has been a great boon.

"It has helped her cope with widowhood just as it allowed her to get over the loss, exile, penury and frustration of her early life."

In 2012 Kerr was awarded an OBE (Order of the British Empire) for services to children’s literature and Holocaust education.