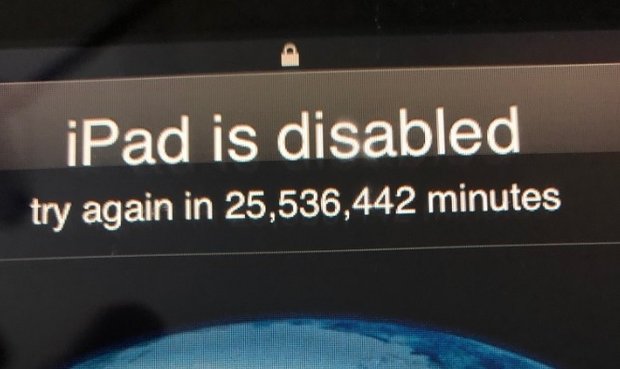 Letting a child play with your iPad can have disastrous consequences if left unsupervised. Evan Osnos, a New Yorker journalist, has learn that lesson after his three-year-old disables the iPad for the next 48 years.

The iPad's screen states that it is disabled for the next 25,536,442 minutes, which corresponds to 48 years and six months. Osnos posted on Twitter about the incident, asking followers if anybody had any solution to his issue.

Apple devices effectively disable themselves after someone puts the wrong password in for the fifth time. Ordinarily, the device is disabled for one hour at a maximum after nine incorrect attempts.

So how did the iPad go from 60 minutes to 25,536,442? The only explanation is that Osnos was a victim of a relatively well known bug, in which the internal clock resets to 1 January 1970. This has now left the journalist with nearly half a century to wait until the iPad unlocks again.

However, the crafty journalist managed to unlock the iPad by resetting the device and restoring his data with a back-up.