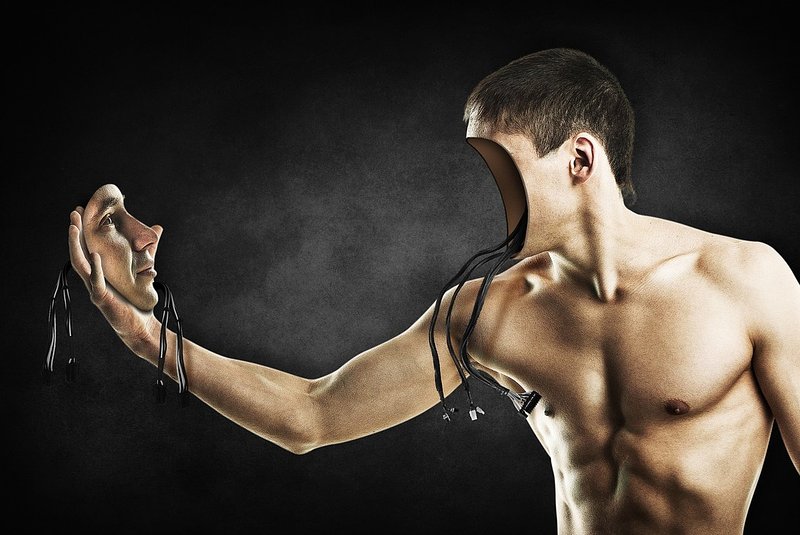 In this modern era is the notion of the Alpha male dead? And, moreover, what will replace them?

I've never been an Alpha. I wasn't even sure what comes after Beta before starting out on this piece. But, well, let's say, I'm likely somewhere around the Gamma/Lone/Vagabond area.

A recent encounter with Luxembourg musician/artist EDSUN got me to thinking...about myself, about perceptions, both external and internal, and the way societal pressures mould our process.

I wandered off into thoughts about the innate behaviours that we consciously, or subconsciously, apply to those around us.

There have been numerous ruminations on the changing role of masculine behaviours in modern society. And, how these even came to be defined and accepted in the first place.

Here must enter a caveat: clearly I am writing from a male perspective on how I view maleness.

I'm not sure I can fathom just what the complete definition is, in this day and age, in order to directly compare to a vastly different generational attitude.

My viewpoint cannot necessarily be deemed incorrect, being that it is based solely on my experiences and my own set of filters. And it is not my intention to be the type who considers his view as the 'only view'.

Shaped, as it is, by the many layered and tangible perspectives of what I have been conditioned to consider are the traits of being a 'good man', a strong confident bloke...'one of the lads', it remains my view, nonetheless.

Whilst I cannot be 'wrong', I am also not claiming to be 'right'.

Now, while it is a possible truth that the modern age is one that is marginally less tolerant to the puffed chests and pissing contests of yesteryear, there is is still an expectation that men are not to display certain traits, for fear of been castigated, cast aside and cast adrift. 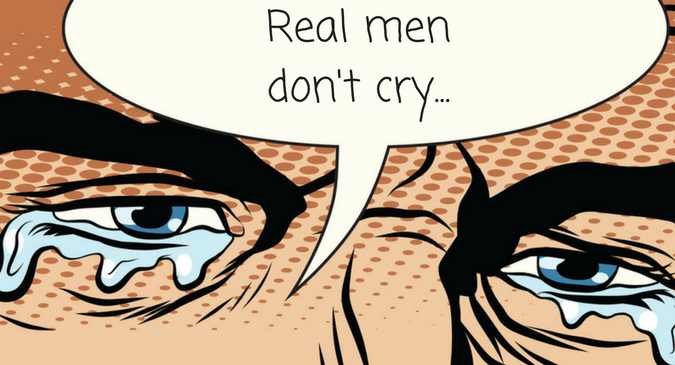 Toxic masculinity can be described as one of the many ways in which Patriarchy is harmful to men. Referring, as it does, to the socially-constructed attitudes that describe the masculine gender role as violent, unemotional, sexually aggressive, and so forth.

Advertising, sporting role models, TV, film, music, mass media in general all depict the 'male' as necessarily prone to violence. Able to take a beating and rise up stronger. Capable of taking on all comers, whilst terribly outnumbered. Quipping away in the face of insurmountable odds and apparently able to make the ladies come over all a quiver with the merest of glances.

I look back over my formative years; mother and father split when I was ten or eleven. It wasn't easy, no. But then many of my school friends had a similar experience. I flitted in an out of different social groups.

Sufficiently intelligent to hang out with the Brainiacs but not 'so' smart that I was shunned by the 'cool' kids, I was a social chameleon. I was suitably proficient in all sports and therefore accepted by the athletic crowd, and I liked just the right amount of indie, rave or metal music to get in with the art clique and the party crews too.

A thousand guises in which to hide but no sense of belonging.

I never felt at home in any of these demographics and thereby struggled with a sense of self and place.

I had two fights at school, both as a result of me trying to 'do the right thing' by standing up for the little man against perceived 'bullies'.

Fighting, you see, was/is a rite of passage. Kudos came easy with having a little punch up, stealing a kiss and copping a feel behind the bike sheds. A choked down smoke at the back of the school fields, getting drunk in a park were all badges of honour.

Only years later do I realise that the bullies had it worse than I. Both had strict fathers. Both were from violent homes.

Since then, the school years, I've been let down or betrayed by surrogate father figures or indeed by those I initially held in high esteem.

Throughout university, it was the same. Being a 'bloke' was about how to 'score' with 'chicks'. Being 'cool' was to be someone unafraid of inverted commas.

F*ck what tomorrow brought. Today was living, tomorrow was for 'losers'.

My shared student lodgings had one clear Alpha. There were six of us living together, four of us followed him around, copied his actions and phrasing. To me, he was someone I did not like, hated even, but someone I 'needed' to impress nonetheless.

As a result, I prescribed to what I thought was appropriate behaviour, I went out a lot, scared of being left out. Still I preferred to keep myself to myself and often enjoyed female company, this created distrust among our 'pack'. Nevertheless, I was on the Rugby Team and with that came 'duties'. Rugby players were 'Alphas' to a man.

Or at least they pretended to be. Going through the motions, indulging in the initiations, the more seasoned players revelled in the role of being part of the 'higher order'. 'You'll do it, or you don't play.'

In the end, that's what I did. I walked away.

Alphas will primp, preen and puff, telling themselves, and anybody else that'll listen, that their aggressive, competitive, domineering behaviors are natural element and that their needs are good.

But now, today, they cannot do that, at least not so blatantly, without sounding ideologically misinformed.

Look at this misanthropic 'score chart' for rating your male-ness. I wish it were satirical. If you survive the almighty cringe surge, please read on.

Some of my behaviours could even be described as attempts to attain Beta, if not Alpha, status and acceptance.

I played sports, I loved the game of rugby...and still do, but I found some of the machismo a little off putting. But I looked at the magazines depicting the ideal form. Pecs of granite, washboard stomachs, jawlines cut from marble. I went to the gym, bought supplements to increase 'mad gainz'.

I gargled and guzzled shot after shot of peer pressured juice in an attempt to 'fit in'.

It could be argued that Alpha behavior is more likely the result of emotional stress and the trauma of being detached from the pack, and not an internal, evolutionary, or aggressive superiority. A reaction to a fear of having your differences used against you, rather than being celebrated. Projection and deflection.

Gay jibes were 'funny' throughout school and uni. Pointing out that someone couldn't drink enough, lift enough, was not macho enough were generally sound measures of projection and reflection. Even now I hear comments that deride men as being gay if they are afraid, or tired, or wear the 'wrong' shade of colour.

It is, quite frankly, astonishing. 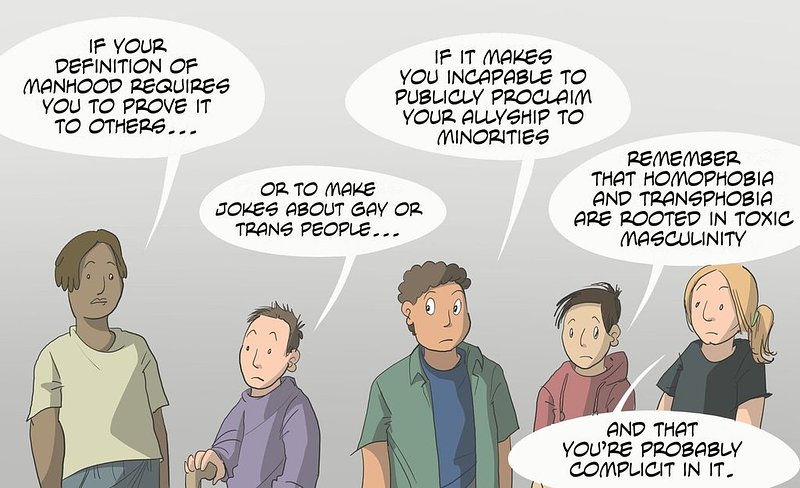 Latterly I've joined a veterans football team, for reasons not unlike those discussed here, and I enjoy the competitive element of playing alongside and against a bunch of 'mates' but, when the whistle is blown and it's time to trudge off field and do 'some chat', I'm suddenly alone.

In my home town, it's a common source of mirth that I don't like the hunting season. That I prefer to stay away from the shooting, then bludgeoning of a deer, or a boar. I've not got the stomach for skinning an animal and this, apparently, is emasculating.

Also, like an increasing number of men, I am not the principle bread winner, my wife earning a substantially higher salary than I.

Is this a result of being less of a man, or of my wife's increased resolve and efforts to succeed?

True, my employment and my role in the household has always been geared toward flexibility for creative endeavours but is the price of modernity the death of a stereotype? If so, I'll gladly cash in the cliché cheque.

The dynamics in millions of households have changed - gender roles have improved and thankfully we are moving away from the Dolls Vs Action Man arguments. 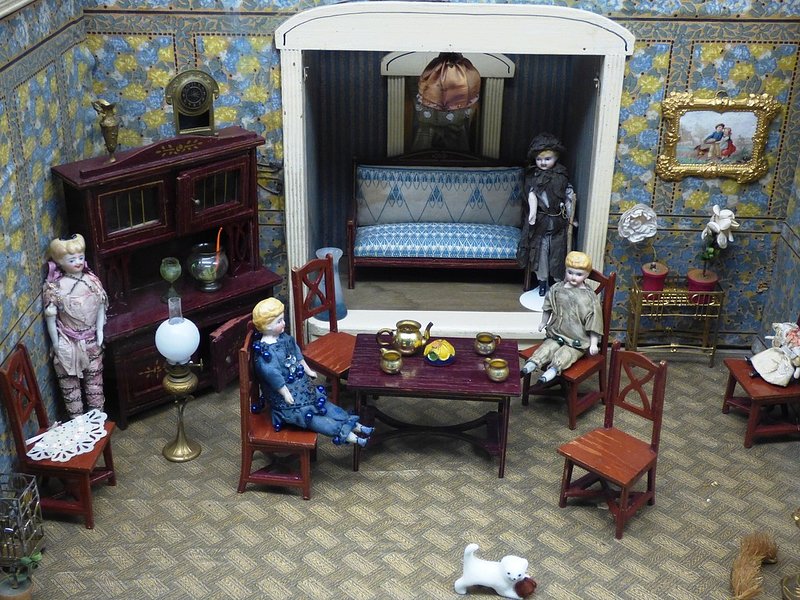 My wife has bust a gut to get where she has and has (presumably) had to navigate far choppier corporate snakes and ladders than I need to deal with.

Village life, at least the village in which I live, is full of builders, carpenters, plumbers, plasterers...they've all got 'weekend work' uniforms and garages stacked to the rafters with tools and toys, that, if I am honest, I know barely half of the functionality.

I can do the basics, rewiring, painting, hanging a door, change tyres, build furniture, but to some that ain't enough.

At a recent dinner party, I cooked a Gulasch*, judging by the hearty laughter, from the bloke's end of the table, this was not something I was expected to have done.

Funny thing is, most, not all, of the wives, laugh that their 'men' can't or won't operate the washing machine, do the dishes, clean. 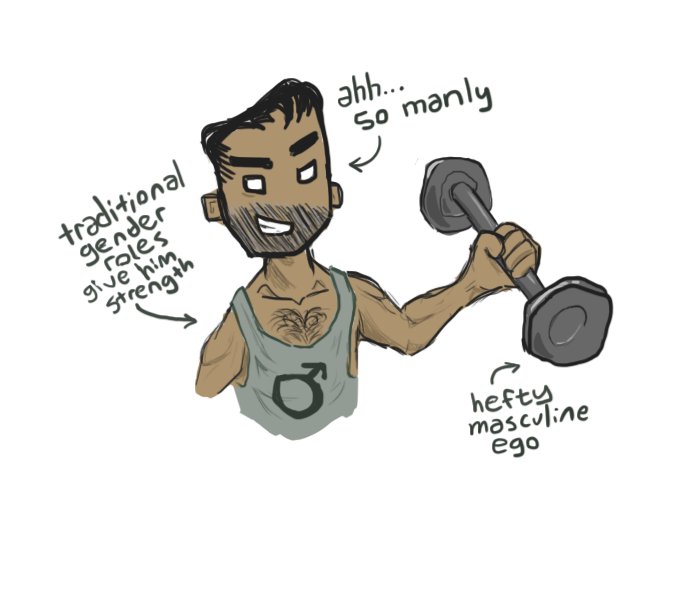 And that is not to say that the men I describe above are Alphas, or at least they are not all of the time. It is to suggest that they chide me for openly displaying emotion, affection and tolerance. They sneer if I talk about a new book, but in private ask me what it's about.

Don't get me started on when I took a book of poetry by R. H Sin  (recommended to me by a woman) to my son's football game (I read the book during the hour long warm up, before anyone starts to ask questions), it was a decision met with looks of bewilderment.

Forget what we are prescribed to think on #MeToo, machismo, emancipation emasculation, equal rights.

Forget what the billboards scream at us.

We should identify as people not as how we are expected to look, act, consume by prescribed notions of what is male and what is not.

And what will replace Alphas? Those with nowhere to go and nowhere to divert limitless wells of misplaced rage; where will their attention go? 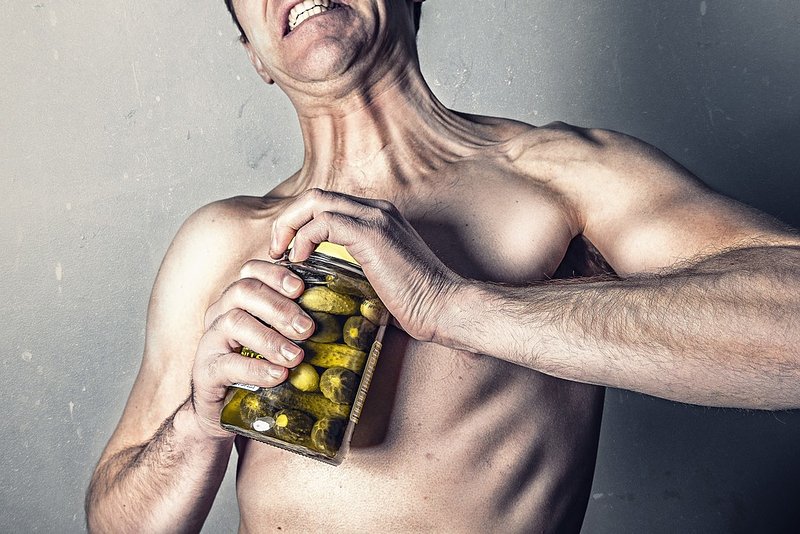 One possibility is that of INCELS. 'What's an INCEL?', you ask. Well, an INCEL is involuntary celibate. And, man, are they angry.

But angry at who? Women, it seems. Those difficult women that aren't susceptible to their special brand of 'charm'.

A cursory glance at the inter-webs pulls up a near endless list of forums dedicated to incel chat (here is one such example).

From school bully through oppressive patriarch to capitalist billionaire to a modern day toxic President, the myth of the alpha male is an excuse for bad behavior.

In a world where Trump, Putin, Kavanaugh, Weinstein et al are seen as pillars of the community, or their dastardly deeds are laughed off as 'locker room bantz', it proves that there are remnants of the Alpha kicking dust in the faces of the 'little man' just because they can.

We can only hope that the meek do in fact inherit the earth.