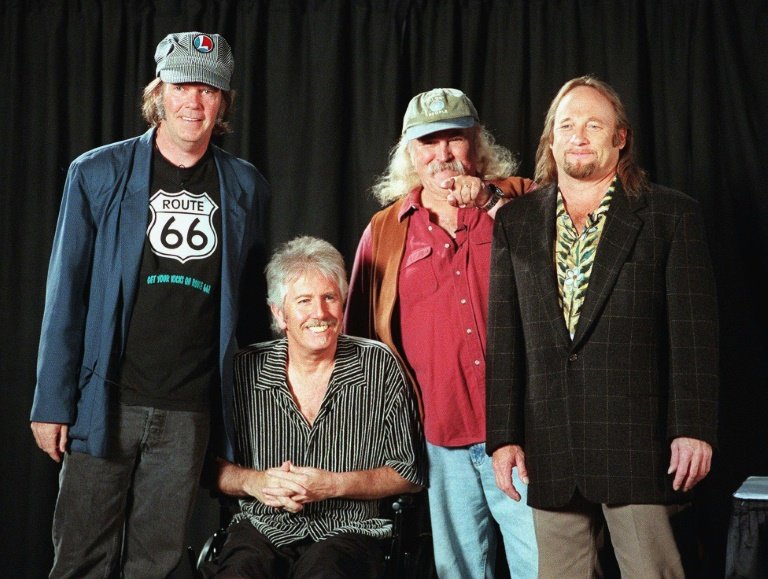 (L-R) Neil Young, Graham Nash, David Crosby and Stephen Stills had many ups and down as a band / © AFP/File

Neil Young hailed the late David Crosby as "the soul" of their supergroup Crosby, Stills, Nash and Young, paying homage Friday to the former bandmate he shared a decade-long feud with.

Crosby, the singer-songwriter who pushed past rock's confines as a co-founder of CSNY as well as The Byrds, died this week at the age of 81.

Crosby's head-butting with Young as well as Graham Nash and even at times Stephen Stills was well-documented, and was cited as a reason the band behind hits including "Ohio" broke up -- multiple times.

Their final appearance as a quartet was in 2013 at a benefit, after which Young and Crosby became estranged over disparaging comments the notoriously brash Crosby made about Young's partner.

Crosby made attempts to apologize, but the damage was done.

But following Crosby's death, Young focused on his longtime collaborator's artistry and their band's legend.

"David's voice and energy were at the heart of our band," Young wrote on his website. "His great songs stood for what we believed in and it was always fun and exciting when we got to play together."

"We had so many great times, especially in the early years. Crosby was a very supportive friend in my early life, as we bit off big pieces of our experience together," the "Heart of Gold" singer continued. "David was the catalyst of many things."

"Thanks David for your spirit and songs, Love you man. I remember the best times!"

When news of Crosby's death broke one day prior, Nash had also put aside his falling out with his collaborator to honor his legacy: "David was fearless in life and in music."

"He leaves behind a tremendous void as far as sheer personality and talent in this world."

And Stills, the only bandmate still speaking to Crosby at the time of his death, called him "a giant of a musician."

"The glue that held us together as our vocals soared, like Icarus, towards the sun."

For years fans had hoped for a CSNY reunion, a door that officially closed with Crosby's passing.

"And I think it's very finished."