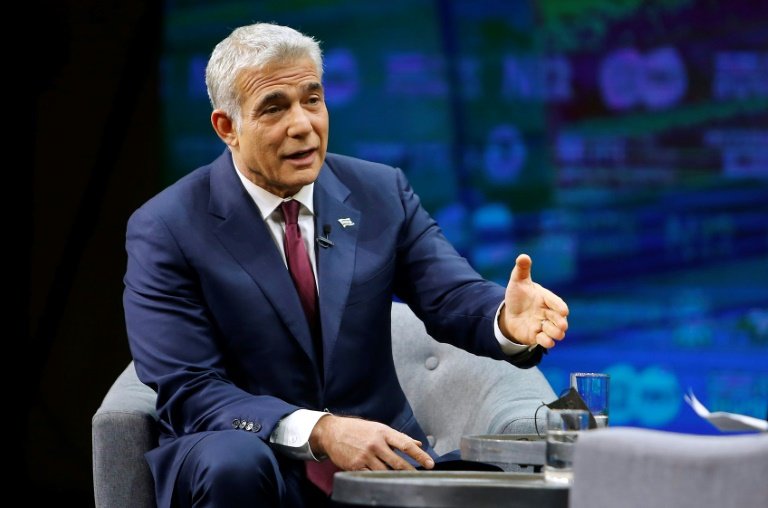 When Yair Lapid founded his Yesh Atid party, some dismissed him as the latest in a series of media stars seeking to parlay his celebrity into political success / © AFP/File

Before Yair Lapid entered Israeli politics a decade ago, launching an unlikely rise that saw him become prime minister, he had what many would view as a comfortable life.

He was a successful news anchor and writer, a former ad pitchman and soap actor, whom many at first dismissed as just another media star seeking political fame.

But colleagues and friends insist Lapid, who has regularly featured on Israel's list of most desirable men, launched his centrist Yesh Atid party out of a sense of public service.

At its inception in 2012, Yesh Atid was focused on Israel's surging cost of living, after Lapid's hometown of Tel Aviv was rattled by protests against the rising prices -- a major campaign issue once more ahead of elections on Tuesday.

Yesh Atid shocked pundits by finishing second in Israel's 2013 vote, behind the Likud party of the then incumbent, right-winger Benjamin Netanyahu.

Lapid, now 58, initially served a rocky term as finance minister under Netanyahu but in 2015 became a key player in the effort to oust him.

When Bennett announced in June that this coalition was no longer tenable, triggering Israel's fifth election in less than four years, he said he would honour his power-sharing deal with Lapid, who took over as prime minister.

Lapid's four months as caretaker premier have not been dull.

In August, he oversaw a three-day bombardment of Islamic Jihad militants in Gaza.

And on Thursday he signed a maritime border deal with Lebanon, Israel's northern neighbour with which it remains technically at war.

"He said: 'You know my life is wonderful,'" recalled Fallenberg, who has translated Lapid's books into English.

Lapid reportedly went on to say that "there comes a time you have to step up and say I'm going to out of my comfort zone ... maybe try to make a difference".

Dov Lipman, who was elected on Yesh Atid's 2013 slate but has since left politics, agreed: "He didn't need any of this. His finances were set and he had fame.

"He got involved in this because he really felt that things need to change in Israel."

Lapid's father, a Holocaust survivor born in Yugoslavia, had also left the media to join politics. Lapid's mother is a writer.

Lapid has an autistic daughter and Lipman recalled that, as finance minister, he regularly set time aside in his weekly schedule to meet her.

On the Israeli-Palestinian conflict, Lapid's positions have been described as broadly centrist, with some right-leaning tendencies.

He made headlines in September after backing Palestinian statehood in an address to the UN General Assembly.

But he has taken no concrete steps towards reviving peace talks and, at times, defended settlement expansion in the occupied West Bank.

In perhaps another demonstration in recent years of his political acumen, Lapid cut ties with Gantz, warning that Netanyahu would break up the coalition before honouring a power-sharing deal.

Speaking to AFP in 2020, Lapid recounted that he had warned Gantz: "I've worked with Netanyahu. Why don't you listen to the voice of experience? ... He is not going to change."

Tuesday will mark the seventh time Lapid and Netanyahu face off in elections as party leaders.

Polls point to another inconclusive result, meaning that for Lapid staying on as premier may again require patching together a fragile coalition of ideological rivals.