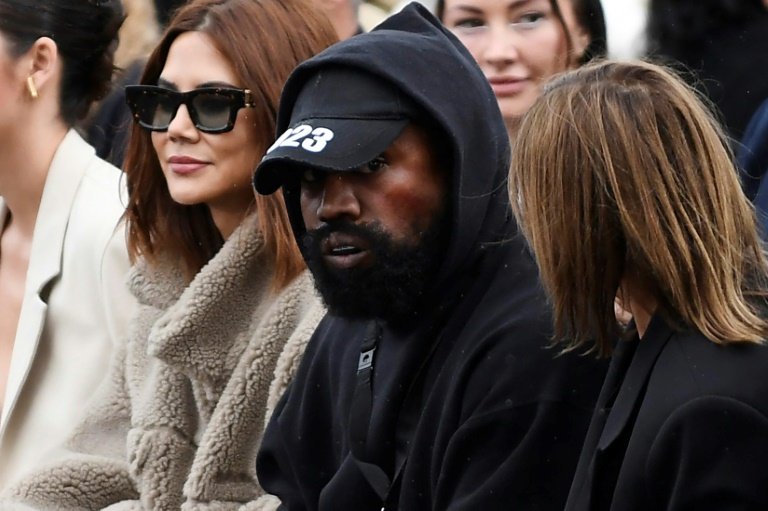 US rapper Kanye West (C), attends a fashion show during the Paris Womenswear Fashion Week, in Paris, on October 2, 2022 / © AFP/File

Kanye West has long been one of the entertainment industry's most polarizing figures, but his recent actions including anti-Semitic comments and white supremacist messaging have alienated fans and business partners alike.

It's another problematic turn for the rapper and fashion mogul once hailed as an artistic genius, but whose stubborn contrarianism has seen him start conflating hate speech with free speech.

The latest controversies -- which erupted during Paris fashion week and after an interview with Fox News -- add to his reputation as a chaos agent, one that has tarnished his musical and fashion talent.

The 45-year-old West, who in the past has unironically compared himself to Michelangelo, broke out in 2004 with "The College Dropout," building a masterful music career that saw him imbue rap with soul and electronic elements to create his lush albums.

His mercurial ways drew some critics but for years his celebrity earned him a pass.

At times his comments garnered him praise for his honesty: in 2005, he called out George W. Bush's handling of Hurricane Katrina, delivering an urgent plea for help during a televised fundraising concert before saying "George Bush doesn't care about Black people."

But in the decades that followed his musings grew increasingly bombastic and controversial.

After the rollercoaster rollout of his album "The Life of Pablo," West, who has talked openly about struggling with bipolar disorder, suffered a mental breakdown, disappearing from the public eye.

In late 2016 he reemerged, strolling into Trump Tower to meet the then president-elect.

He made waves as a rare celebrity to support the Republican billionaire, whose four years in the White House were mired with repeated accusations of racism and sexism.

In 2018, West met with Trump in Washington for a surreal tete-a-tete that included a hug between the two and an on-camera rant.

And during the 2020 election West, who later legally changed his name to Ye, his longtime nickname, launched his own unsuccessful bid for the American presidency as an independent candidate of the Birthday Party.

Since then West has been crossing line after line.

At Paris' most recent fashion week he sported a shirt allying with white supremacist rhetoric. Days later his Instagram and Twitter accounts were restricted over anti-Semitic posts.

The American Jewish Committee (AJC) hit out at West for having "fomented hatred of Jews," while many other celebrities decried his words and urged him to stop.

"Kanye West should figure out how to make a point without using anti-Semitism," the AJC organization said.

The artist's already controversial Fox News interview grew even more so after Vice released unaired footage including West comments that were steeped in racist conspiracy theories.

This week, a producer behind the series "The Shop: Uninterrupted" with NBA superstar LeBron James said they were pulling an episode that would have featured West, saying he used the platform to "reiterate more hate speech and extremely dangerous stereotypes."

He unceremoniously scrapped his partnership with Gap, and German sportswear giant Adidas said it was reconsidering their collaboration that's been dogged by tensions.

These are only the latest shock-value moves from the rapper who has long fed media cycles with provocation.

Earlier this year, West was banned from posting on Instagram for 24 hours after violating the social network's harassment policy amid his acrimonious divorce from reality star Kim Kardashian, with whom he has four children.

While in the past some analysts have allowed West benefit of the doubt due to his mental illness, the consensus this time around has emphasized that psychiatric episodes are not an excuse for bigoted behavior.

In the opinion pages of The New York Times, columnist Charles Blow dubbed the artist "a brooding, narcissistic attention addict and praise junkie."

"He attends his torture. He curates and employs it. Some of it may come naturally, but some is manufactured, to enlarge the legend."