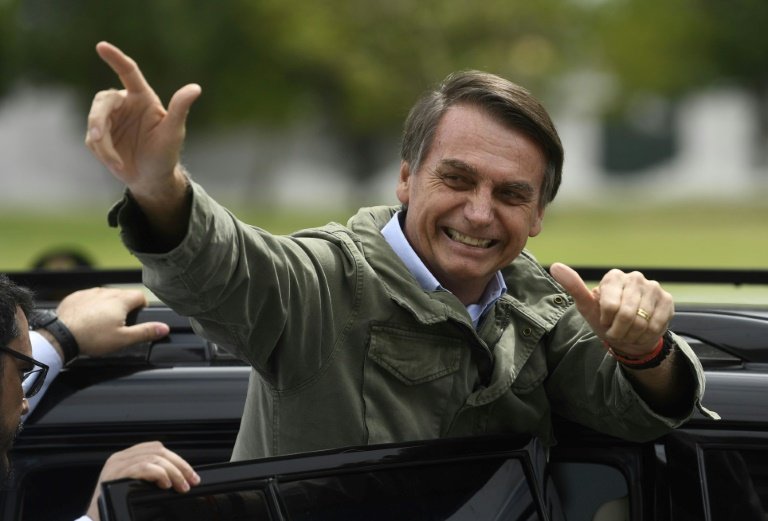 Jair Bolsonaro, far-right lawmaker and former amry officer, gives thumbs up to supporters in October 2018 during the second round of presidential elections, in Rio de Janeiro, Brazil / © AFP/File

Four years after storming in to shake up a Brazil disgusted with politics, far-right President Jair Bolsonaro finds it increasingly hard to cast himself as an outsider, but remains as vitriolic and polarizing as ever.

Seeking re-election for a new four-year term Sunday, the 67-year-old incumbent is trailing in the polls to his leftist nemesis, ex-president Luiz Inacio Lula da Silva (2003-2010).

Known for a brash, divisive style that earned him the nickname "Tropical Trump," Bolsonaro, an ex-army captain turned congressman, surged to national prominence in 2018 by playing to voters disgusted with Brazil's economic implosion and the massive "Car Wash" corruption scandal that stained a laundry list of bigwigs in the worlds of business and politics, particularly Lula's Workers' Party.

When Bolsonaro survived a knife attack during a campaign rally that September -- perpetrated by an assailant who was later declared mentally unfit to stand trial -- it only fueled followers' belief in their "Messias," or "Messiah" -- Bolsonaro's middle name.

But the aura of invincibility around the president has faded as he enters the twilight of his term with the economy sputtering and his popularity flagging. 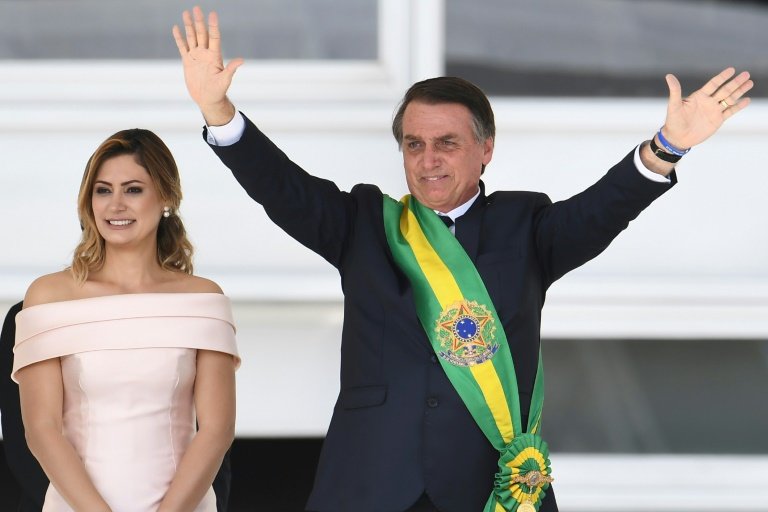 In January 2019, Brazil's new president Jair Bolsonaro (R) waves to supporters next to his wife Michelle after receiveing the presidential sash from outgoing president Michel Temer at the presidential palace in Brasilia / © AFP/File

Tapping widespread outrage, Bolsonaro won the presidency in a landslide in 2018, with broad support from the business sector, voters fed up with corruption, and the powerful "Bibles, bullets and beef" coalition -- Evangelical Christians, security hardliners and the agribusiness industry.

But he infuriates critics with his divisive vitriol and disdain for political correctness, often drawing accusations of racism, sexism and homophobia.

And his support has badly eroded among the political center and business sector as his administration has floundered through various crises.

Bolsonaro insistently downplayed Covid-19, defied expert advice on fighting it and mocked face masks, social distancing and vaccines, warning the latter could "turn you into an alligator" -- even as the death toll in Brazil surged to become one of the highest in the world, second only to the United States at more than 685,000.

Bolsonaro faces international outcry over the destruction of the Amazon rainforest, which has surged on his watch, fueled by cattle ranches encroaching on the jungle.

He also faces scores of impeachment requests and a series of corruption scandals involving his inner circle.

He is betting on big new welfare benefits launched in July to boost his support from low-income voters -- but faces accusations of economic populism and fueling already soaring inflation.

Born in 1955 to a Catholic family with Italian roots, Bolsonaro served as an army paratrooper before starting his political career in 1988 as a Rio de Janeiro city councilor.

Two years later, he was elected to the lower house of Congress, where he served until becoming president.

He has ignited one explosive controversy after another with his remarks.

In 2011, he told Playboy magazine he would rather his sons be killed in an accident than come out as gay.

In 2014, he made headlines by saying a left-wing lawmaker was "not worth raping" because she was "too ugly."

In August 2020, he threatened a journalist who asked him about allegations his wife, Michelle, received money from a political operative targeted in a corruption investigation.

"I so want to pound your mouth with punches," Bolsonaro told the reporter from leading newspaper O Globo.

The president is openly nostalgic for Brazil's 1964-1985 military dictatorship, whose "mistake," he said in 2016, "was to torture and not kill" leftist dissidents.

Bolsonaro has cultivated a close relationship with the army top brass, selecting General Walter Souza Braga Netto, his onetime defense minister and chief of staff, as his running mate.

Many Brazilians fear Bolsonaro could try to fight the election result if he loses, following in the footsteps of his political role model, ex-US president Donald Trump.

He has hinted he will not leave the presidency without a fight, saying his reelection bid can only have three outcomes: "prison, death or victory."

Bolsonaro has four sons -- three of them politicians -- and, in what he called a moment of "weakness," a daughter.