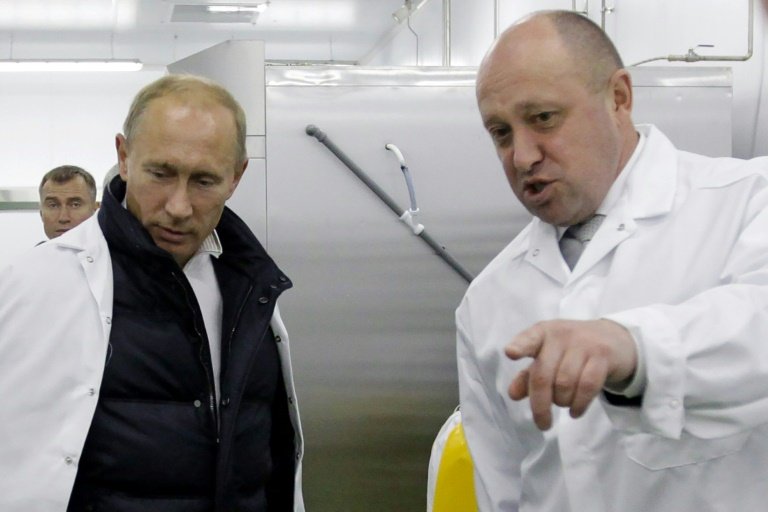 From taking a big Kremlin catering contract to personally recruiting convicts in a prison yard to fight in Ukraine, secretive businessman Yevgeny Prigozhin appears to have a unique role in President Vladimir Putin's Russia.

The 61-year-old Saint Petersburg native on Monday broke cover to issue a rare personal statement confirming what many had already assumed -- that he is behind the hugely controversial Wagner PMC (private military company) mercenary group.

But this is by no means the only controversy surrounding Prigozhin, who is sanctioned by the EU and Washington, accused of election interference in the United States and has issued threats against jailed opposition figure Alexei Navalny.

Prigozhin had for years irritably shaken off claims tying him to Wagner, whose fighters have waged battles in eastern Ukraine in 2014, Africa, Syria and now during Russia's 2022 intervention in Ukraine.

On Monday he confirmed he had founded Wagner in 2014, saying a "group of patriots was born" who worked in Africa, Syria and even Latin America to become "pillars of our motherland".

Earlier this month, a video surfaced of a bald man bearing a strong resemblance to Prigozhin in a jail courtyard, offering contracts to prisoners to fight in Ukraine with a chilling set of conditions.

"If you serve six months, you go home and you are free. If you want to stay (with Wagner) you can. No one goes back to prison.

"If you arrive in Ukraine and decide it's not for you, we will regard it as desertion and will shoot you. Any questions, guys?" said the man.

"The first sin is desertion. No one gives themselves up," he said, adding recruits should have grenades on them in case of capture. "If you die, your body will be repatriated to the place you wrote down on the form."

It is not possible to verify if the man in the video is Prigozhin but a statement in his name from his holding company Concord did not deny it was him.

It cited him as saying: "Of course, if I were a prisoner, I would dream of joining this friendly team in order to be able not only to redeem my debt to the Motherland, but also to repay it with interest."

He added: "Those who do not want PMCs (private military companies) to fight... then send your children to the front."

Prigozhin rose from a modest background to become part of the inner circle around Putin, who also hails from the former imperial capital on the Baltic Sea.

He spent nine years in prison in the final period of the USSR after being convicted of fraud and theft, emerging in 1990 as the Soviet Union was collapsing.

In the chaos of the 1990s, he began a moderately successful business selling hot dogs.

From there he fell into the restaurant business and opened a luxury location in Saint Petersburg whose customers included Putin, then making the transition from working in the Soviet KGB to local politics.

The Concord catering group he founded at one point worked for the Kremlin, earning Prigozhin the soubriquet of "Putin's chef".

But the sheer range of his acknowledged and alleged interests have made this name something of a misnomer.

Prigozhin shuns the limelight and there are scant images of the man who rarely makes public appearances. When he is captured on camera, it is with a shaven head, a piercing stare and usually in a dark suit.

One of the best-known images shows him at the Kremlin in 2011, bending down over a seated Putin as he offers him a dish while the Russian leader looks back with an approving glance.

Reports in Russian media have described him as a billionaire with a vast fortune built on state contracts, although the true extent of his wealth is unknown.

He was sanctioned by Washington which accused him of playing a role in meddling in the 2016 presidential election, in particular through his internet "troll factory".

Prigozhin denied any involvement and in March asked for $50 billion in compensation from the United States.

He had until now always denied links to Wagner, which is accused of abuses and meddling not just in Ukraine but also Syria, Libya and countries in sub-Saharan Africa.

In July 2018, three journalists researching Wagner's operations in the Central African Republic for an investigative media outlet were killed in an ambush.

Western countries have accused Wagner of coming to the aid of the military junta in Mali, in a move that contributed to France's decision to end an almost decade-long military operation there.

Prigozhin has been unusually vocal in the wake of the poisoning of Navalny, who fell ill on a flight in Siberia and was then transferred for treatment in Germany in 2020.

The two have never made any secret of their enmity, with Navalny's anti-corruption group accusing a firm that worked with Concord of serving food in schools that was dangerous for the health of children.

Prigozhin sued Navalny for libel and a court ordered that the campaigner's group pay more than $1 million in damages.

Not mincing his words, Prigozhin said: "I intend to strip this group of unscrupulous people of their clothes and shoes."