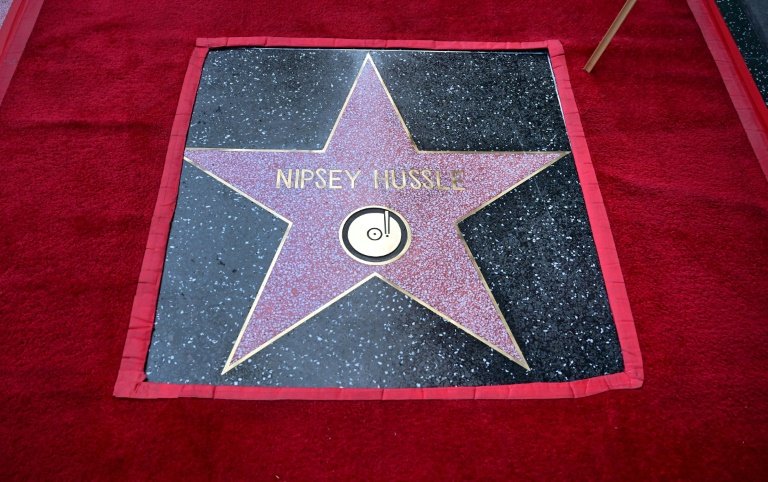 Slain rapper Nipsey Hussle, who was shot in Los Angeles, was honored with a star on Hollywood's Walk of Fame on Monday.

The gang member-turned-community-activist died in a hail of bullets three years ago, in an episode that triggered an outpouring of grief over a life of music and activism cut short.

On what would have been his 37th birthday, Hussle was awarded a star on Hollywood Boulevard.

"Nip would have been honored by this moment," Hussle's long-term girlfriend Lauren London told a large crowd.

"I think he would want everyone to remember that you can't get to what's possible unless you commit to moving forward.

"That doesn't mean forgetting where you come from, but it requires acknowledging the reality you were born into and the power you have to change that reality for the better."

Raised in the Crenshaw district of Los Angeles, Hussle, who was 33 at the time of his death, had transformed the block he used to hustle on into a retail, job-creating hub for his Marathon Clothing company.

But the "Racks in the Middle" artist remained linked to the gang-ridden world he grew up in, and was killed after telling his attacker there was talk he had been "snitching."

Eric Holder, 32, was convicted of murder in July. He is expected to be sentenced on September 15.

Thousands of people gathered in April 2019 for a service in Hussle's honor, with Stevie Wonder and Snoop Dogg among those paying tribute.

In a letter read during the service, US president Barack Obama wrote, "While most folks look at the Crenshaw neighborhood where he grew up and see only gangs, bullets and despair, Nipsey saw potential. He saw hope. He saw a community that, even through its flaws, taught him to always keep going."