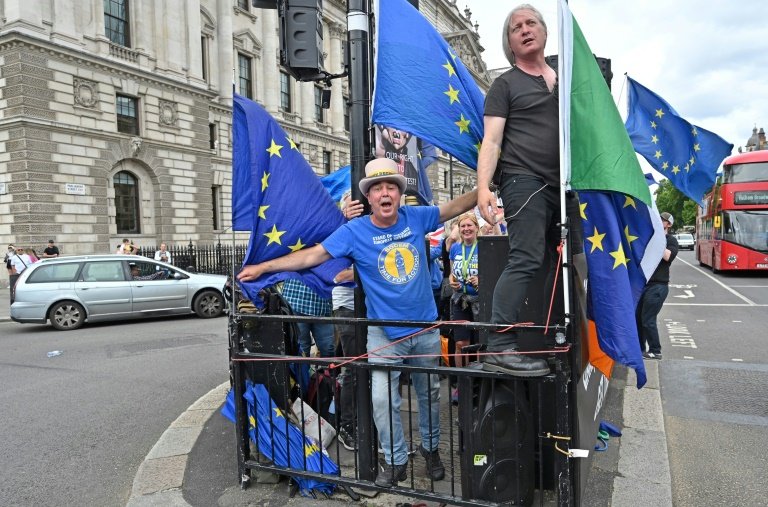 He has spent years protesting outside Britain's parliament with his trademark yellow ribbon hat, "Stop Brexit" shouts and blaring music.

But hours after police confiscated his amplifiers, campaigner Steve Bray on Wednesday vowed to make his protests "twice as loud" in future.

"I've just ordered three new amplifiers of the same type. It's all they had in stock! Thanks to you all," he tweeted in the early hours of Wednesday.

Anti-Brexit and corruption campaigner Bray, 53, has become a regular fixture in Westminster where he spends his time hollering slogans at passing politicians and during live television broadcasts, winning him a national following.

Taking particular aim at Boris Johnson each Wednesday for "Prime Minister's Questions" in the House of Commons, he regularly belts out the song "Liar" by the Sex Pistols and ABBA's "Money, Money, Money".

But Bray, who has been protesting since 2017, on Tuesday had his amplifiers confiscated by police.

On Wednesday when he tried to blare music again officers told him he was in a designated area where noisy protesting was now forbidden under the new Police, Crime, Sentencing and Courts Act.

Speaking from an alcove on a street corner across the road from parliament, however, Bray told AFP he would find a away around the new restrictions.

"I worked out that under this arch is not on their map for illegal amplification," he said, adding that police were now also seeking to use another law -- the Highways Act -- to stop him protesting.

"My next step is to work out how to get around this law. There will be a loophole and we will find it. This government is taking away our right to protest," he said.

The legislation brought in by Johnson's Conservative government allows police to put more conditions on protests including setting noise limits. 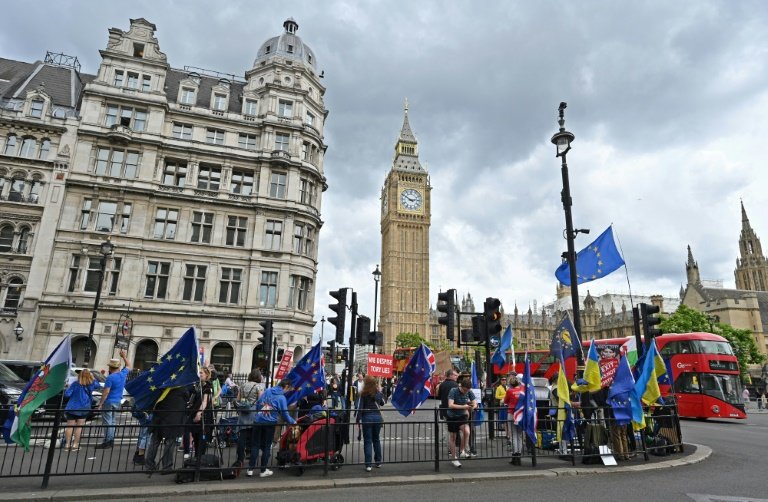 Bray is adamant that he will not pipe down, despite the threat of arrest under new laws to curb noisy protests / © AFP

As well as limiting the activities of people like Bray, it will also enable police to reduce disruption caused by the environmental campaign group Insulate Britain.

The group's protests, which have attracted both strong support and outrage from different sections of the public -- have seen motorways blocked by the activists who glued themselves to the road.

Rights campaigners, however, have claimed the new law is draconian and threatens the public's right to protest.

Amnesty International in April condemned the "deeply authoritarian" bill and said it was a "dark day for civil liberties in the UK".

In 2019 Bray stood for parliament, contesting the Welsh seat of Cynon Valley, near his home town of Port Talbot, for the anti-Brexit Liberal Democrat party.

At the time the Lib Dem's leader at the time, Jo Swinson, denied he was a joke candidate, insisting: "He is a passionate campaigner."

In an interview with AFP last year, Bray explained that he stayed in a London flat provided by supporters that he shared with a lookalike of Prime Minister Boris Johnson.