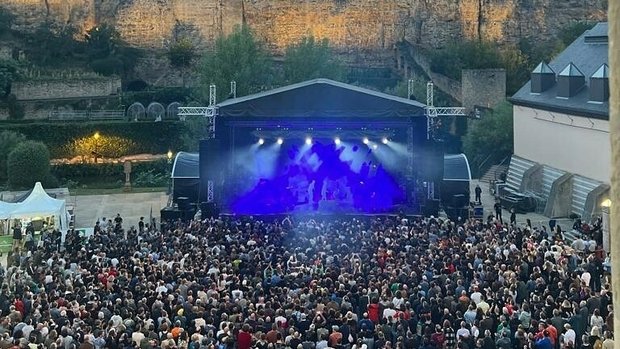 Luxembourg really is a curious melting pot of creeds, cultures, vibes and vapes, it is never more so apparent than at an open-air concert.

And with that we discuss RTL Today Radio being present at the Neumünster Abbey for den Atelier's first, in a run of gigs, show for the summer season.

Fresh off the success of this year's Siren's Call, hopes were high that 2/5s of Radiohead would be a considerable draw on a balmy Monday night in the city.

Though The Smile's debut album, A Light For Attracting Attention, has been met with all the chin stroking you could think of, the public has not yet jumped fully onboard the hype train. And so it is here, with many tickets available for walk-in curious cats.

The Smile @ Neimënster (27.6.22)
© David Robson
The photos published on this site are subject to copyright and may not be copied, modified, or sold without the prior permission of the owner of the site in question.

Sam Steen and Stephen Steps Lowe were cajoling punters to get their 'smiles on' at the station's logo wall, with Dave Robson on snapping duties, the talk on the terrace was that all were here for a glance at one of indie-rock's biggest stars.

They were delighted, then, to get an earlier glimpse than first thought when Thom Yorke and Tom Skinner (drums and founder of Sons of Kemet) made their way on stage for a, sort of, half-planned, possibly impromptu DJ set. As is the way, Thom (faux)struggled to crack a smile as he and Skinner took turns to drop and intertwine tracks together, ranging from what could feasibly of been Tubular Bells played backwards to expletive-packed rap and some rumbling Dub.

Yorke strolled out in shades and dungarees, and leaned on the monitor, half enjoying the chance to noodle, and half-amused by the apparent disinterested from a large number of the, by now, growing crowd.

At a shade after 9pm Yorke and Skinner were joined on stage by Jonny Greenwood and thus The Smile was complete. Being that the album has been out for a few months and it was clear as day that some folk were brought here by 'true' fans rather than their own volition, the atmosphere generated was an odd mix of frenetic whoops and applause and sudden bouts of awkward silence, with the crowd not yet sunken into the ebbs and flows of  The Smile remit.

None of this, of course, is the band's fault, they are exceptional. Each of them fantastic musicians and performers in their own right and as a collective but familiarity is missing and thus we can't connect with the kicks and licks, and don't fully appreciate the subtle time signature changes or how the instruments complement each other. Ears do pick up on some of the snappier cuts such as The Opposite, Thin Thing, You Will Never Work and We Don't Know What Tomorrow Brings...

There's little by way of interaction or crowd-pleasing...this is a serious act for a serious band, but then who in their right mind would attend a concert with Thom Yorke and expect a 30 minute stand-up show replete with fart gags and dick jokes...looking around the throngs, there are a few here that would have preferred that as an option.

For the rest of us, we soaked up the chance to see one of our musical heroes up close and in the flesh. It is true that it is the more Radiohead(y) tracks that hold the attention longer but the set is taut, tight....and, if we are being critical, not served well by the ol' sunshine. This gig would have been a different matter altogether in the pitch dark with the Grund's rock faces lit dramatically.

I have no idea how much of a success the show was for the band or the venue(s), inasmuch as that the tickets have been like veritable hotcakes for the rest of the tour.

But, if we are to attach a semblance of hope that a fully-formed Radiohead visit could come to fruition, perhaps this was a tentative dipping of the toe into, wait for it, A Moon Shaped Pool.

We can but hope for the weather to maintain its part of the bargain, as, with many more sans roof gigs to attend RTL Today Radio is excited for the upcoming summer months.

Further reading: Isabella Eastwood's review of The Smile's exclusive streamed gigs back in March of this year