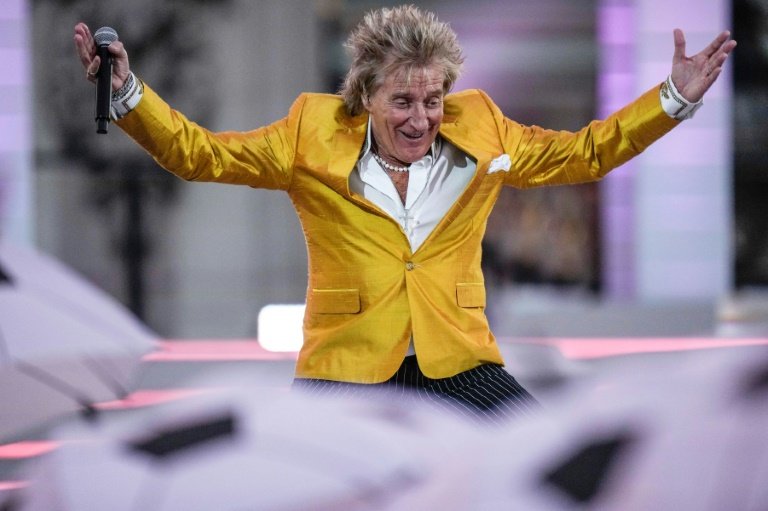 Britain revelled in celebrations Saturday for Queen Elizabeth II's 70 years on the throne as it staged a spectacular "party at the palace" featuring Diana Ross, Andrea Bocelli and Rod Stewart while Prince Charles led heartfelt tributes.

The concert, the climax of the third day of public events to mark the 96-year-old monarch's record-breaking Platinum Jubilee, saw 22,000 ticket-holders watch performers on a purpose-built 360-degree stage outside Buckingham Palace.

Tens of thousands more thronged the city centre while millions watched on television as an array of performers dazzled and personal messages from household names in Britain and beyond were beamed onto the palace.

"You have met us and talked with us, you laugh and cry with us and, most importantly, you have been there for us for these 70 years," Charles said from the stage as the event drew to a close.

"You pledged to serve your whole life -- you continue to deliver. That is why we are here. That is what we celebrate tonight."

The country's longest-reigning monarch did not attend the two-and-a-half-hour concert in-person but made repeated appearances in archive footage and clips of past comments and speeches, and was said to be watching on television in Windsor Castle. 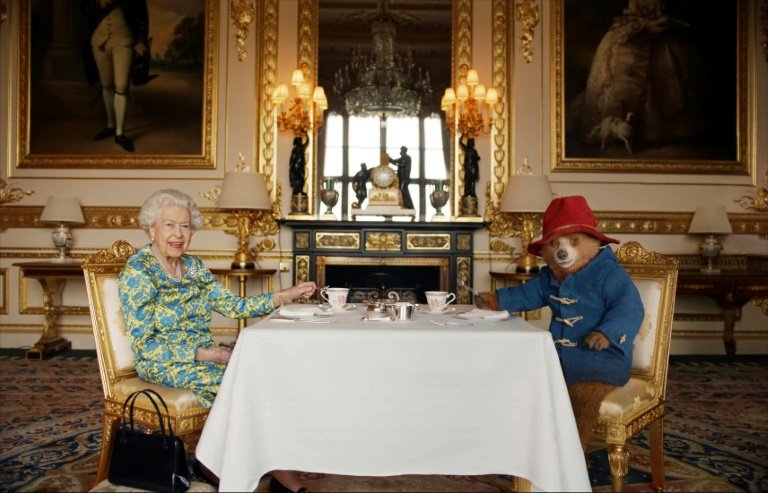 She had made two public appearances on the Buckingham Palace balcony on the first day of celebrations Thursday, but that left her in "some discomfort", the palace said, amid persistent difficulties walking and standing.

She withdrew from a Friday thanksgiving church service and missed Saturday's flat-racing showcase The Derby for only the fourth time since 1952. 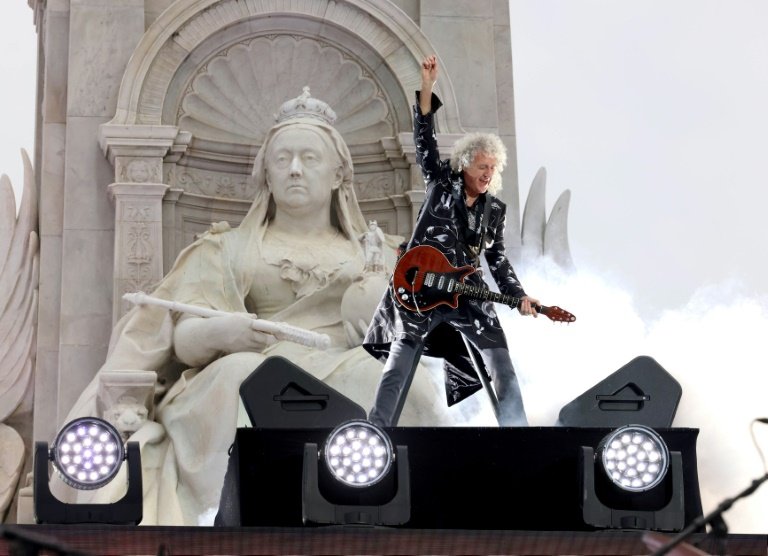 As that night's star-studded show started, the monarch made a surprise on-screen appearance in a comedic pre-recorded scene taking tea with Britain's beloved children's book and film character Paddington Bear.

"Happy Jubilee, ma'am, and thank you. For everything," the bear told her, as they jokingly shared their love for marmalade sandwiches.

"That's very kind," the queen replied, before the pair began tapping out the drum beat to rock band Queen's "We Will Rock You" on their tea cups and saucers with silver spoons.

The short sketch was reportedly filmed at Windsor in March and kept top secret, with few members of the royal family even aware of it.

Queen, with singer Adam Lambert, opened the performances with stomping renditions of "We Will Rock You", "Don't Stop Me Now" and "We Are The Champions".

"It's wonderful to be back," guitarist Brian May told the BBC beforehand, in a nod to one of the most enduring images from the 2002 jubilee, playing "God Save the Queen" on the roof of Buckingham Palace. 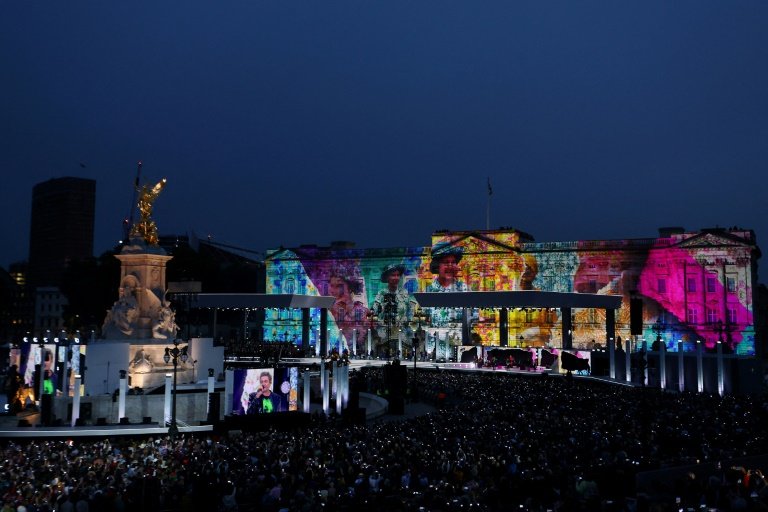 The palace was majestically illuminated through the evening / © POOL/AFP

Italian opera star Bocelli then shone in a solo performance, while Motown legend Ross closed the event with her first stage appearance in Britain in 15 years, ahead of an appearance at Glastonbury Festival this month.

Elton John pre-recorded a poignant rendition of "Your Song" while David Beckham, James Bond actor Daniel Craig and former US First Lady Michelle Obama were among others to record tributes.

"I feel deeply honoured to have spent time with you over the years," said Obama, recalling her own nervousness visiting Buckingham Palace and thanking the queen for "your remarkable example".

The palace was majestically illuminated through the evening, including with a message from natural history broadcaster David Attenborough and accompanying video featuring the queen. 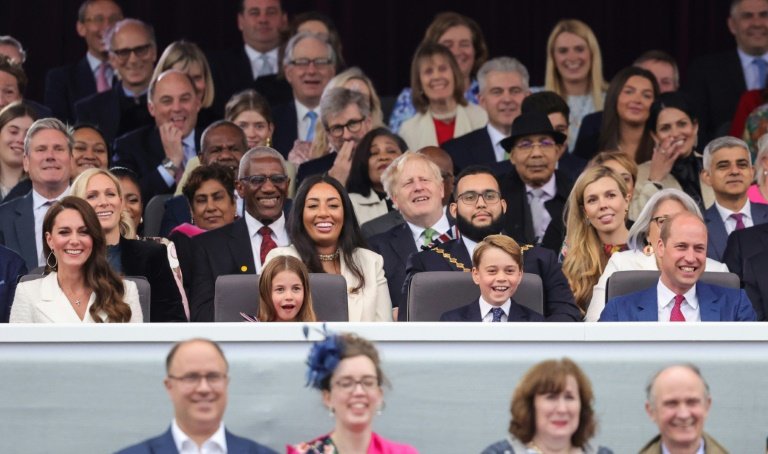 Charles, 73, and his eldest son, Prince William, 39, as well as William's two eldest children, George, 8, and seven-year-old Charlotte, joined flag-waving dignitaries in the royal box at the concert.

The Duke of Cambridge used his speech to commend the queen's commitment to conservation and tackling climate change.

Prince Harry and wife Meghan, who quit British royal life for California in January 2020 but are visiting for the jubilee, were notably absent.

Britain made Thursday and Friday public holidays to mark the royal milestone, which has focused attention on the monarchy's future without the queen. 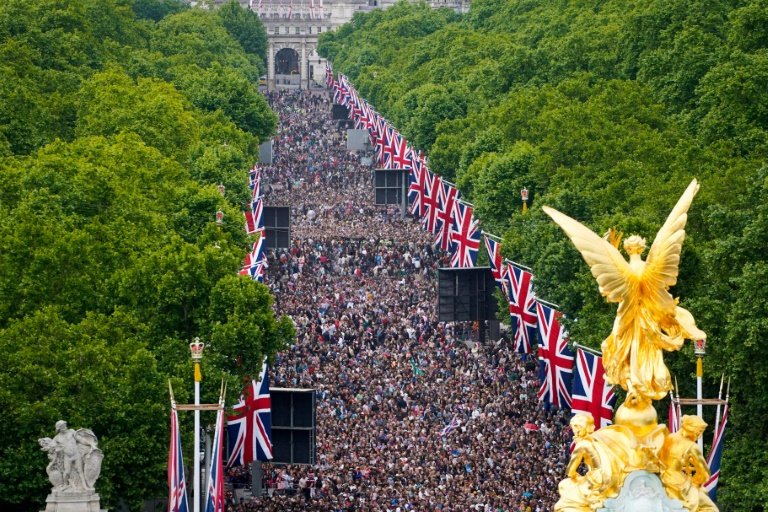 Longer pub opening hours, street parties and other celebratory events have temporarily lifted the gloom of a soaring cost-of-living crisis.

Sunday will see millions of people share food at "Big Jubilee Lunch" picnics and take part in a musical and creative public pageant with a cast of 10,000.

Ed Sheeran will round off the celebrations Sunday, singing his 2017 hit "Perfect".