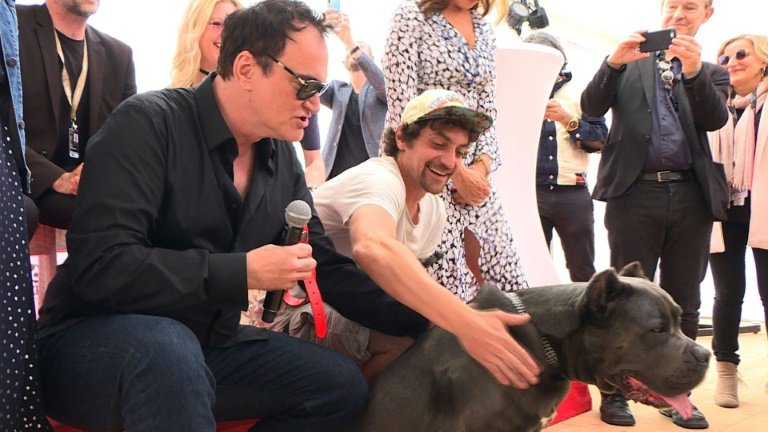 It's the only award that mutt-ers in Cannes, and in a year when war was a constant backdrop to the festival, even the canine-loving Palm Dog award paid tribute to Ukrainians.

It's the only award that mutt-ers in Cannes, and in a year when war was a constant backdrop to the festival, even the canine-loving Palm Dog award paid tribute to Ukrainians.

The Palm Dog, which rewards the best pooch performances at the Cannes Film Festival, celebrated its 21st year on Friday in typically dog-eared style.

"This is the foremost and paw-most celebration of dogs on the big screen," said presenter Toby Rose, who helped found the award back in 2001.

The top award -- which comes in the form of a red leather collar -- went to Brit, a fluffy silver poodle who starred as Beast in "War Pony", the directorial debut of Riley Keough and Gina Gammell.

Keough, who happens to be Elvis Presley's granddaughter, accepted the award via video link-up and said she was "honoured", describing Brit as "just a legend".

The Guardian's chief film critic Peter Bradshaw, another co-founder of the four-legged tradition, said it was "incredible" that the award show had turned 21.

"It's grown from a chihuahua to a Rhodesian Ridgeback," he told the crowd.

"I look out at a sea of professional journalists all wondering: what is this strange Anglo-Saxon piece of whimsy?" Bradshaw added.

"Is it serious? Is it silly? The answer is I don't know. My bewilderment has only deepened over the years."

This year saw a special Dog-manitarian Award handed out to Patron, the Jack Russell that has helped sniff out landmines in Ukraine.

Patron has already been honoured for its work by President Volodymyr Zelensky, and the Palm Dog organisers said they wanted to add their support to the cause.

A member of the Ukraine delegation to Cannes, which has been very active at the festival this year, accepted the collar on Patron's behalf.

"Patron could not be here because his work is very needed back home," she said. "But this is dedicated to all defenders of Ukraine and defenders of a peaceful world."

The Palm Dog has been something of a highlight at the festival over the years.

Quentin Tarantino proudly showed up to receive the red collar on behalf of Brandy after "Once Upon a Time in Hollywood" premiered at Cannes in 2019.

Tilda Swinton picked up the top prize last year for her real-life dogs in "The Souvenir" and managed to contact them via WhatsApp during the ceremony.