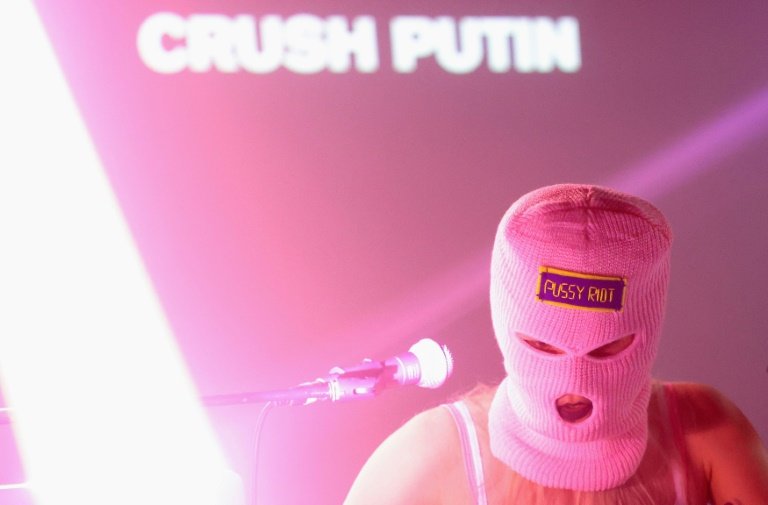 Balaclava-clad members of Russian protest punk band Pussy Riot mounted the stage for a Ukraine benefit concert with a blunt message for the Berlin audience about Vladimir Putin: we told you so.

Since their raucous performance at Moscow's Christ the Saviour Cathedral in 2012 condemning the Orthodox Church's support for Putin, the feminist collective has been warning against creeping "totalitarianism" under the Kremlin strongman.

Their demonstrations have landed the band's members repeatedly in jail and, under threat of further prison time, member Maria Alyokhina secretly left Russia recently, disguised as a food courier.

After a journey that took her through Belarus, Lithuania and Iceland, Alyokhina reunited with Pussy Riot in front of a capacity crowd in the German capital late Thursday.

"Slava Ukraini!" (Glory to Ukraine), she cried from the stage, kicking off the band's first tour in more than two years at Berlin's Funkhaus, the ex-headquarters of communist East Germany's state-controlled broadcaster.

Proceeds from the "Riot Days" shows across western Europe will go to groups aiding Ukraine.

The performances are based on the book of the same name by Alyokhina recounting the cathedral protest in neon balaclavas and her two years in what she calls the Russian "gulag" system of prisons.

Using video projections, spoken word and rap over an acid jazz saxophone and electronic beats, the band railed against what it called Putin's system of internal repression and foreign aggression.

The show has been updated to include a haunting final section shot this month in Ukraine, with brutal images of civilians' suffering.

"Bucha! Bucha! Bucha!" Alyokhina screamed as the name of the town outside Kyiv where Russian troops have been accused of war crimes flashed in red on screen. The Kremlin denies Russian involvement in atrocities.

"Mama, there are no Nazis here," she whispered, assuming the character of a fictional Russian soldier told by his superiors they are fighting for "de-Nazification" of Ukraine.

Before the show, Alyokhina, 33, said she wanted to use Pussy Riot's hard-earned star power to keep the spotlight on Putin's "crimes".

"We have now worse censorship in Russia and you can be jailed (for) 15 years just for posting photos from Bucha," she said, speaking in English.

In September, Alyokhina was sentenced to one year restricted movement while protesting in support of jailed Kremlin critic Alexei Navalny, but in April authorities moved to convert her sentence into real jail time. 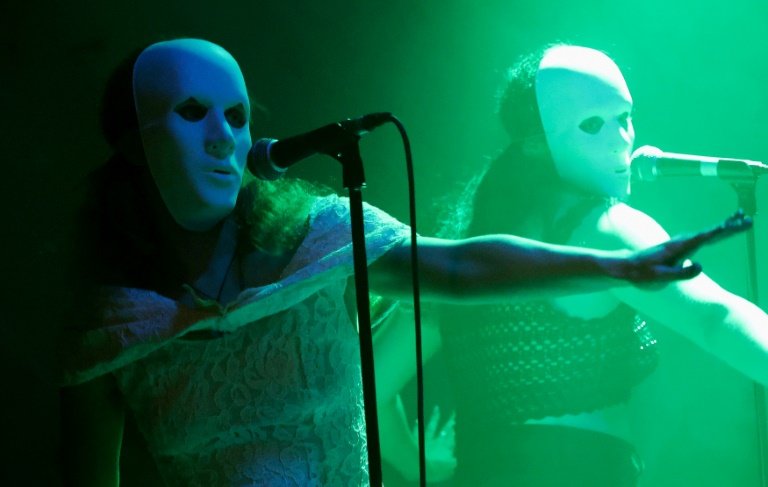 Band members have been jailed in Russia / © AFP

She said it was crucial that people in the West use their freedoms to maintain the pressure on their governments to stand up to Russia's "regime".

"I think the main thing is not to be indifferent about the situation and do not pretend that it does not exist," Alyokhina told reporters.

"People are dying and people in Russia (go) to prison and I mean for me the main evil is indifference."

Berlin offered medical treatment to Pussy Riot member Pyotr Verzilov after a suspected poisoning in 2018 as well as to Navalny two years later. Both men blamed Russian authorities for the attacks, which the Kremlin denied.

However fellow band member Olga Borisova accused Western countries of "hypocrisy" in their dealings with Putin for failing to take firmer action against him after Russia's 2014 annexation of Crimea while continuing energy imports.

"Stop buying (Russian) oil and gas because this money goes to imprison us and beat us on demonstrations and (is) actually for poison for opponents, and repression, and murders of innocent Ukrainian people," she told reporters.

A 28-year-old languages student from Crimea in the crowd who gave her name only as Yana to protect Ukrainian family members in combat said Pussy Riot understood a decade ago what the West was now only learning.

"Pussy Riot got it from the beginning what was happening in Russia under Putin," she said.

"They sacrificed so much freedom to tell the truth. They have my deep respect."