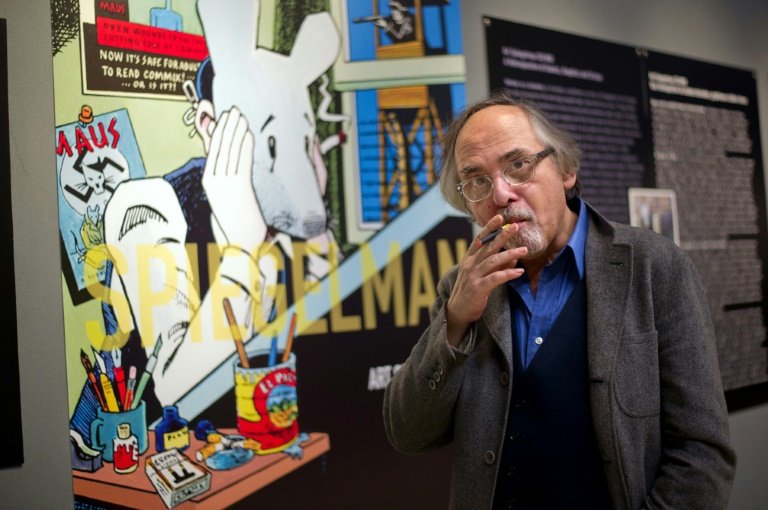 Art Spiegelman, author of the acclaimed graphic Holocaust novel "Maus," which was banned by a Tennessee school district. / © AFP/File

A school board in Tennessee has added to a surge in book bans by conservatives with an order to remove the award-winning 1986 graphic novel on the Holocaust, "Maus," from local student libraries.

Author Art Spiegelman told CNN Thursday -- coincidentally International Holocaust Remembrance Day -- that the ban of his book for crude language was "myopic" and represents a "bigger and stupider" problem than any with his specific work.

The ban, decided by the McMinn County Board of Education in eastern Tennessee on January 10, sparked a national uproar among advocates of literary freedom after it became widely known in the past few days.

It was the most recent controversy over conservatives seeking to purge school libraries of books they find objectionable, with the focus on works that offer alternatives to traditional views of US history and culture, particularly from the viewpoints of African Americans, LGBTQ youths, and other minorities.

"Maus" was highly acclaimed when it was published as a compilation of Spiegelman's serialized tale of the experiences of his father, a Polish Jew, with the Nazis and in a concentration camp during the Holocaust.

The book, which depicted characters in the story as animals -- Jews are mice and Germans are cats -- won a Pulitzer Prize and other awards, and was accepted in many secondary schools as a powerful and accurate depiction of the Nazi murder of millions of Jews during World War II.

The ban by the McMinn County school authority though focused on the use of eight crude words like "damn" and "bitch" and one scene of nudity, which some parents said were inappropriate for schoolchildren.

"There is some rough, objectionable language in this book," said school board director Lee Parkison, who proposed just redacting those parts of the book.

But others argued that, while teaching teens about the Holocaust was necessary, a different book was needed.

"It shows people hanging, it shows them killing kids; why does the educational system promote this kind of stuff, it is not wise or healthy," asked board member Tony Allman.

Others defended the book. But they recognized the possible legal challenges over copyright and censorship that redacting could bring, and voted along with opponents to remove it from school libraries altogether.

"They are totally focused on some bad words that are in the book.... I can't believe that," Spiegelman told CNN from his home in Switzerland.

"Given the pronounced lack of knowledge about the Holocaust in the US, especially among younger Americans, a Tennessee school board decision to ban Maus... is beyond comprehension," said David Harris, chief executive of the American Jewish Committee.

In a statement Thursday the McMinn school board defended its decision.

"Maus" was banned "because of its unnecessary use of profanity and nudity and its depiction of violence and suicide," they said.

"Taken as a whole, the board felt this work was simply too adult-oriented for use in a schools."

They stressed they were seeking other works that will teach about the Holocaust "in a more age-appropriate fashion."

The "Maus" ban added to the list of so-called culture war fights in which conservatives have forced local schools to proscribe books, particularly those written with the perspectives of ethnic and gender minorities.

In October, a Texas school district temporarily withdrew copies of a book, "New Kid," that explains the unintentional "micro-aggressions" an African-American child suffers because of the color of their skin.

In Virginia, parents fought to have the widely lauded book "Beloved" by Black author Toni Morrison, a winner of the Nobel prize for literature, removed from reading lists.

In York County, Pennsylvania in October, students battled to reverse a ban on several books, including works about South African icon Nelson Mandela and Pakistani activist Malala Yousafzai, and many about minority children.

While nearly all recent attacks on books for students has come from the right, in recent years the left has also acted to force schools to drop some longtime popular classics.

Targets have included "Huckleberry Finn" and "To Kill a Mockingbird" because of their use of anti-Black epithets and negative characterizations of African Americans in relation to whites.