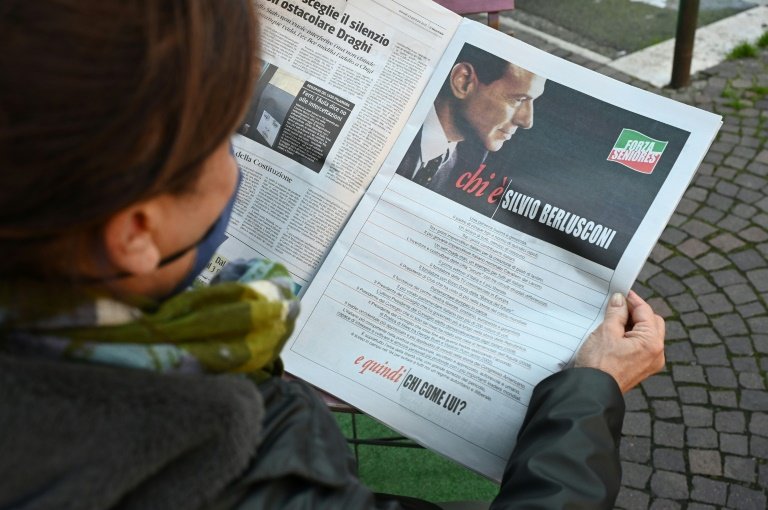 Berlusconi took out newspaper ads to promote his presidential campaign, but dropped out on Saturday / © AFP

Former Italian premier Silvio Berlusconi was back in hospital on Sunday for "routine" checks, his spokesman said, the day after the billionaire withdrew his bid to become president.

His doctor, Alberto Zangrillo of Milan's San Raffaele hospital, confirmed the 85-year-old was admitted on Sunday morning for "periodic clinical check-ups" that had been planned for some time.

One of Berlusconi's political allies, Matteo Salvini of the anti-immigration League party, said he had had a long telephone call with the former premier and he was "calm and well".

Berlusconi had been campaigning hard behind the scenes to become Italy's next president in an election that begins in parliament on Monday, but withdrew on Saturday evening.

The bid was always a long shot, not least because he remains embroiled in legal proceedings over his "Bunga Bunga" sex parties.

He said he was pulling out through a sense of "national responsibility", saying Italy needs to unify behind a candidate as it battles the coronavirus pandemic, but media reports said his family were worried about his health.

Berlusconi, who was prime minister for his centre-right Forza Italy party three times between 1994 and 2011, underwent open heart surgery in 2016 and has been in and out of hospital in recent months.

In September 2020, after being hospitalised for 11 days with Covid-related pneumonia, he said he had had a close brush with death.

Analysts also doubted he had the numbers to win among the more than 1,000 electors made up of MPs, senators and regional representatives.

The favourite to succeed President Sergio Mattarella as Italy's head of state is Prime Minister Mario Draghi, but the election -- conducted via secret ballot -- is notoriously hard to predict.