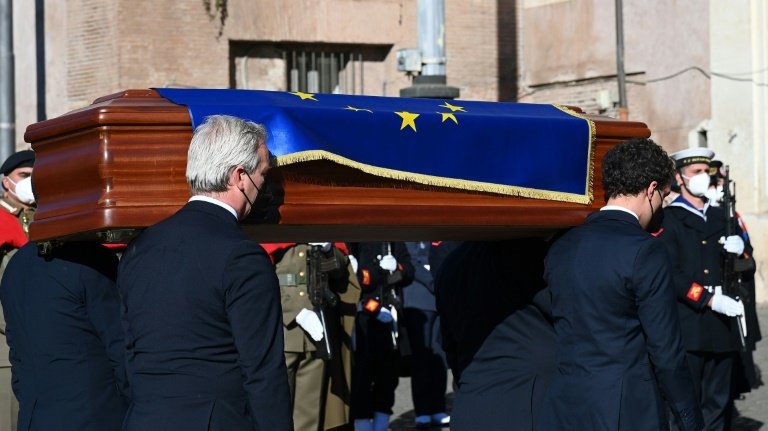 Pallbearers carried Sassoli's casket, draped in the blue European Union flag, into the Basilica of St. Mary of the Angels and the Martyrs / © AFP

EU and Italian leaders led mourners Friday at the state funeral in Rome of David Sassoli, the head of the European Parliament who died earlier this week aged 65.

Pallbearers carried Sassoli's casket, draped in the blue European Union flag, into the Basilica of St. Mary of the Angels and the Martyrs, flanked by a guard of honour.

Thousands of people had queued on Thursday to say goodbye as Sassoli's body lay in state at the Capitoline Hill in Rome, surrounded by wreaths.

The Catholic service, attended by only around 300 people due to coronavirus rules, was broadcast live on RAI public television, under the headline, "Ciao David".

Sassoli died in the early hours of Tuesday in a hospital in northern Italy where he had been admitted on December 26 for what his spokesman had said was "a serious complication due to a dysfunction of the immune system".

Von der Leyen described it as a "sad day for Europe", while Draghi hailed him as a "profound pro-European... a symbol of balance, humanity and generosity".

On Friday, Castex told AFP Sassoli was "a great European", adding: "I was extremely shocked at the brutality, the speed of his death."

Sassoli's 2.5-year term presiding over Europe's legislative body was due to end this month.

The parliament's acting speaker is now its highest-ranking vice-president, Roberta Metsola, a Maltese politician who was already tipped to succeed Sassoli.