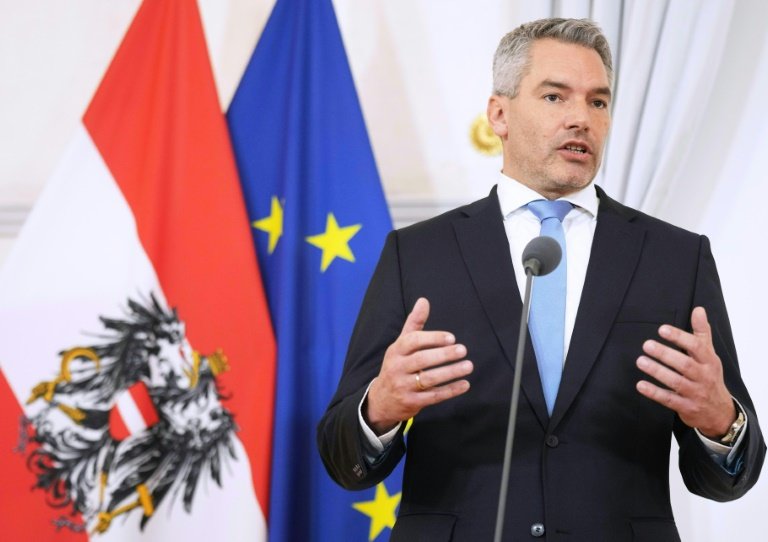 All change: Karl Nehammer is Austria's third chancellor in as many months after an eventfull few days in the country's politics / © APA/AFP

Austria's conservatives are hoping their new Chancellor Karl Nehammer, sworn in on Monday, will live up to his reputation as a clean-cut former soldier who can smooth over the country's turbulent political waters.

Born in Vienna, 49-year-old Nehammer rose to the ranks of senior lieutenant but left the military to work in political communications and pursue a career in the conservative People's Party (OeVP).

Rising through the ranks as a "loyal soldier", he worked in several key positions and secured the support of the party in the OeVP's stronghold region of Lower Austria.

In early 2020 he became interior minister and his department came in for some criticism for its response to the jihadist terror attack that hit Vienna in November of that year.

The father of two is married to the daughter of a well-known TV presenter and lauded Austrians for observing social distancing at the beginning of the pandemic, which he observed on extended walks with Fanny, his Bavarian Mountain Hound.

However, public compliance with repeated lockdowns has waned, and more recently Nehammer has been issuing warnings to those protesting lockdowns and mandatory vaccination to remain within the law.

Austrian commentators are hopeful that Nehammer -- the country's third chancellor in as many months -- can end the political turbulence that began with a sweeping corruption investigation that led then-chancellor Sebastian Kurz to step down after a raid on his office in October.

Though one of Kurz's most trusted enforcers, Nehammer was never part of his inner circle that was engulfed in the recent embezzlement and disinformation scandal.

When Kurz announced that he would fully withdraw from politics and his successor as chancellor, Alexander Schallenberg, offered to vacate his office, conservatives quickly settled on Nehammer as the party's new leader.

Nehammer seized the opportunity to appoint new interior, finance and education ministers, while reiterating that he would "hold the line" when it comes to the OeVP's hardline positions on migration and security.

His time as interior minister was not without controversy.

After a jihadist who had previously been convicted for attempting to join the Islamic State killed four people in Vienna last year, Nehammer's ministry was criticised for failing to watch the man after warnings from neighbouring Slovakia that he had been trying to buy ammunition.

Nehammer himself incensed critics by overseeing the deportation of children born in Austria and insisting that Afghans with no right to remain be repatriated even as the Taliban approached the gates of Kabul.

"If deportations are no longer possible due to the restraints by the European human rights convention, we have to think of alternatives," he said at the time.

His Green coalition partners have been among his loudest critics on migration issues but on a personal level they nevertheless describe him as easy to communicate with -- and a more reliable partner than Kurz.

Patrick Moreau, Austria specialist at France's CNRS institute, says that a Nehammer administration may also lead to "less confrontation" within the EU, after the Alpine nation blocked key decisions under Kurz.

Domestically, Nehammer will have to "win back the trust" of the large number of voters who responded to Kurz's populist platform but are now being courted by the far-right, according to the Der Standard daily.