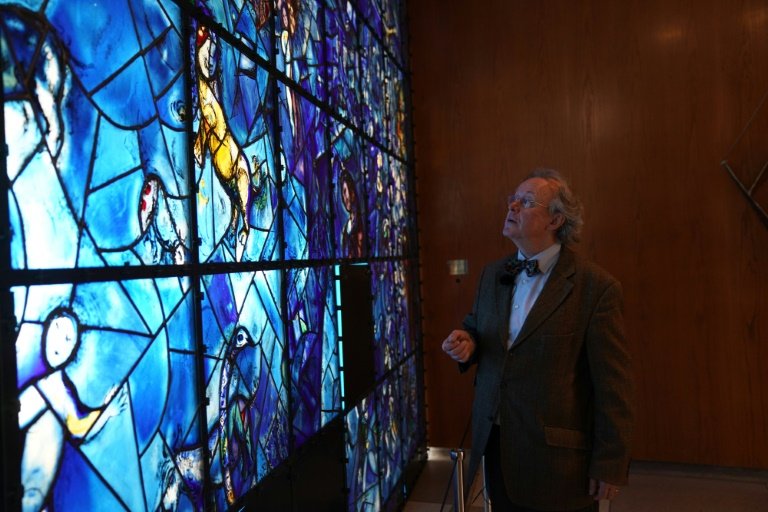 Marc Chagall, Henry Moore and Fernand Leger. In almost eight decades, the UN headquarters in New York has accumulated numerous artworks, making it home to a little-known but precious collection.

The crises that nations deal with inside the centre of international diplomacy are expressed through some of the 400 works, which have been donated by 150 of the 193 member countries.

"We have an art collection that would be the envy of many museums in the world. And we are not a museum," says Werner Schmidt, who oversees the collection that tourists could partially visit before the pandemic but which currently remains closed to the public.

The artworks represent historical moments, artistic trends and the particularities of donor countries, some of which have ceased to exist, such as East Germany, Yugoslavia and the Soviet Union.

Among the most spectacular is "War and Peace" by Brazilian artist Candido Portinari. The two murals frame the entrance to the General Assembly, the heart of the world body. 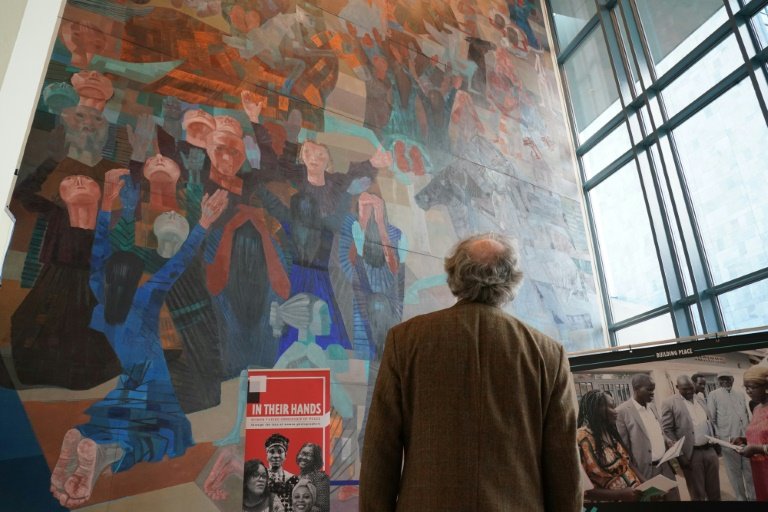 Werner Schmidt, photographed on November 3, 2021 in New York, is responsible for around 400 artworks in the UN's colelction / © AFP

"At the entrance the delegates see a landscape of war and despair and at the exit, a world in peace and harmony," Schmidt told AFP.

It's an allegory of the goal of the UN since its creation in 1945: to settle disputes through dialogue.

Chagall himself went to the UN in 1964 to deliver his "Windows", a stained glass artwork that is now damaged but nobody knows how.

It was part of a collection that UN officials put together after the death of former Secretary General Dag Hammarskjold and fifteen employees in a plane crash en route to negotiate a ceasefire in then Zaire in 1961.

Sculptor Henry Moore's admiration for Hammarskjold led him to donate his "Reclining Figure" statue to the UN and is on display in its gardens.

A monumental work by American artist Barbara Hepworth, a rare woman represented among the artworks, also stands out. 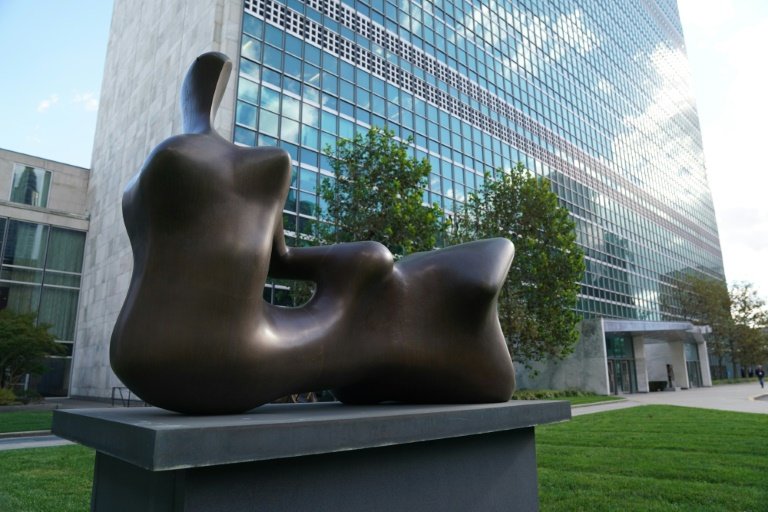 A Henry Moore sculpture in the gardens of the UN headquarters in New York on November 3, 2021 / © AFP

Other works include a daily scene from a Saudi desert oasis in solid gold, gifted by Saudi Arabia, and a sculptured gold palm tree with bunches of pearls in place of dates, which was donated by Bahrain.

Some works reflect pivotal moments in a country's history such as a tapestry that depicts the horrors of the Chernobyl nuclear power plant explosion in 1986.

East German sculptor Fritz Cremer's "The Rising Man" was intended to be a celebration of the communist regime but aroused the hostility of intellectuals in the country.

Nearby is the sculpture "Good Defeats Evil." Donated by the Soviet Union, it depicts St. George slaying a dragon and is built entirely from nuclear missile casings.

Two abstract frescoes by Leger flank the General Assembly amphitheater. Ex-US president Harry Truman remarked that they resembled bacon and eggs and a rabbit being pulled from a hat. No one ever contradicted him, according to Schmidt. 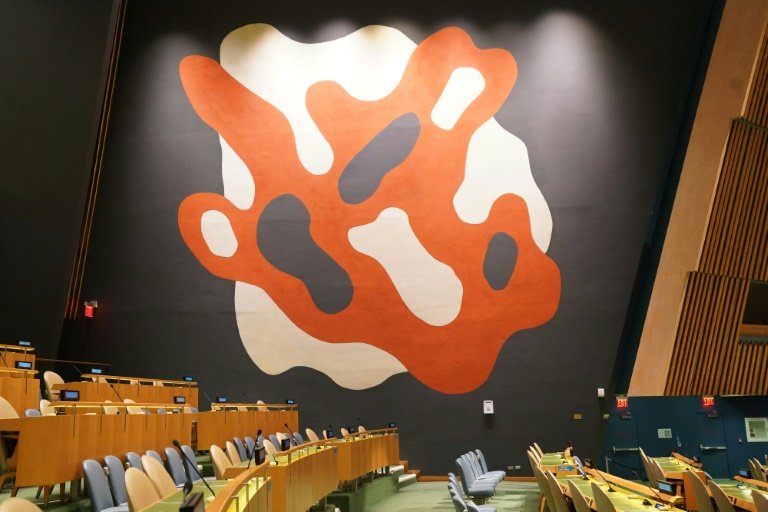 A fresco by Fernand Leger in the hall of the United Nations General Assembly in New York on November 3, 2021 / © AFP

A tapestry depicting Pablo Picasso's "Guernica" greeted members at the entrance to the Security Council chamber as a haunting reminder of the horrors of war for almost four decades before it was returned to Nelson Rockefeller's heirs earlier this year.

Any country can donate a work, as long as it's not offensive.