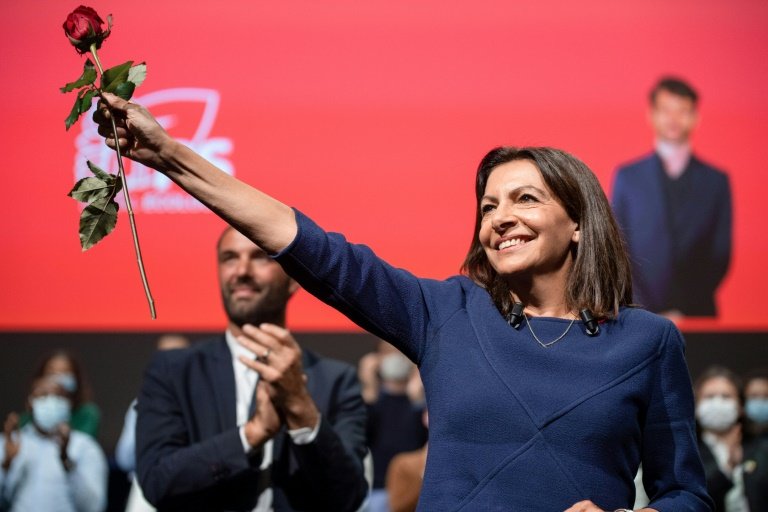 Paris Mayor Anne Hidalgo, struggling to get her bid for the French presidency off the ground, is facing growing pressure to show she can galvanise leftwing voters ahead of a make-or-break vote for the Socialist Party next year.

With only six months before the election, she travelled to the northern French city of Lille at the weekend for a campaign event where questions about her candidacy were on everyone's minds.

"Is she really going to represent everyone, and are her opinions going to matter to us?" asked Marion Doublet, a student at the University of Lille, who came to hear Hidalgo's plans at the city's Rem Koolhaas-designed conference centre on Saturday.

Doublet said she was hesitating between Hidalgo and the Greens candidate Yannick Jadot, who is currently leading among the country's deeply fragmented left in opinion polls.

Hidalgo is stuck at four to seven percent, in line with the disastrous six percent result for the Socialists in 2017, when Francois Hollande abandoned his re-election hopes after the most unpopular presidency in modern history.

"I'm here to convey a project of social, ecological and democratic reconquest," Hidalgo told a crowd of 1,700 party members, pledging pay hikes including a doubling of teacher salaries as well as a "climate wealth tax" for fighting global warming.

The Socialists' survival is on the line -- if Hidalgo fails to secure at least five percent in the first round of voting next April, the state will not reimburse her campaign spending, a prospect the cash-strapped party cannot afford.

It was already forced to sell its historic headquarters in Paris after the 2017 debacle, and chairman Olivier Faure has struggled since then to show that his party, rooted in the legacy of unionism and a state-managed economy, has a viable plan for a country wrestling with immigration, insecurity, inequality and the fallout of the Covid crisis.

"The problem with Anne Hidalgo is that she has no political identity. She's never been a minister, she doesn't seem to have political beliefs -- no one knows what she thinks," said Remi Lefebvre, a political scientist at the University of Lille.

Most Socialist voters have migrated to the Greens, the far left of Jean-Luc Melenchon, or the centrist platform of President Emmanuel Macron, said Emeric Brehier, a former Socialist lawmaker now with the Fondation Jean-Jaures think tank.

And many are unlikely to come back.

"The party hasn't worked enough to show people its vision for the world of tomorrow and for the next 30 years. What does it mean to be a Socialist or a social democrat today?" Brehier said.

"You ask anyone what are the two or three main things the party proposes, including the six percent that are going to vote for Hidalgo, I don't know what they would be able to come up with," he said.

To make matters worse, Hidalgo is widely seen as embodying an elitist Socialist party, urban and wealthy, with little time for the concerns of everyday French outside Paris.

"She's the mayor of Paris, and that doesn't give her a favourable image in a France with lots of inequality," Lefebvre said.

But the Socialists had no other candidates with any national stature.

Even Hollande has denounced Hidalgo as "lilliputian", though many say Hollande -- who alienated swathes of leftist voters with tax rebates for companies -- has only himself to blame for the party's demise.

"Hollande was the party's gravedigger," Lefebvre said, dismissing any chance that he would do better than Hidalgo, as the former president has hinted in media interviews.

Hidalgo vowed Monday that despite her grim polling numbers she would pursue her campaign to the end, ruling out any alliance with the Greens to propel the French left into the second round.

But unless her candidacy gains ground, the political calculus may prove too costly.

Beyond the risk of no campaign spending funds, a poor showing could smash Socialist hopes for parliamentary elections a few weeks after the presidential -- losing more seats would automatically end the subsidies it gets from the state.

That could make a deal with the Greens unavoidable, with Hidalgo giving up her quest in exchange for ensuring that Socialists retain key districts.

"The party won't recover, or only with great difficulty, from a second campaign where you only get six percent," Brehier said.

But for now, party faithful say their cause is not yet lost.

"I think that despite everything she still has a chance," said Nadia Metref, a Socialist councillor for the Val d'Oise department north of Paris who attended Hidalgo's rally in Lille.

"Today we could use a feminine approach that could bring a bit of humanism back to the country," she said.