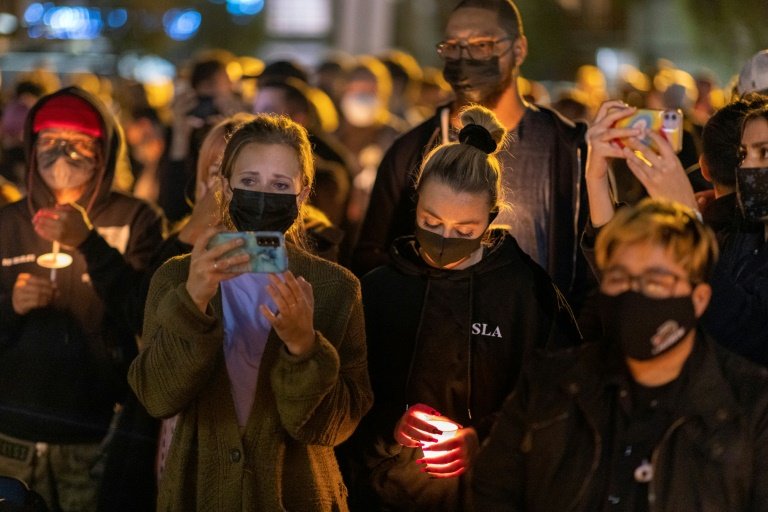 People attend a candlelight vigil in Burbank, California, for cinematographer Halyna Hutchins, who was accidentally killed by a prop gun fired by actor Alec Baldwin / © AFP

Alec Baldwin was practicing drawing his gun from his holster and pointing it at the camera when he fatally shot cinematographer Halyna Hutchins on the set of the movie "Rust," the director said in a search-warrant affidavit.

The 63-year-old Baldwin was "sitting in a pew in a church building setting, and he was practicing a cross draw," director Joel Souza said, "pointing the revolver towards the camera lens."

Souza told investigators in the affidavit released by the Santa Fe County Sheriff's Office on Sunday that he was looking over Hutchins' shoulder "when he heard what sounded like a whip and then loud pop."

The director said he remembered the 42-year-old Hutchins "complaining about her stomach and grabbing her midsection."

"Halyna began to stumble backwards and she was assisted to the ground," the affidavit, seen by AFP, said. "Joel explained that he was bleeding from his shoulder and he could see blood on Halyna."

Hutchins was struck in the chest when Baldwin fired the prop gun he had been told was safe on the set of the low-budget western in New Mexico on October 21. She was declared dead in hospital hours later.

Souza, 48, was treated by doctors and sent home.

No one has been charged and no arrests have been made. 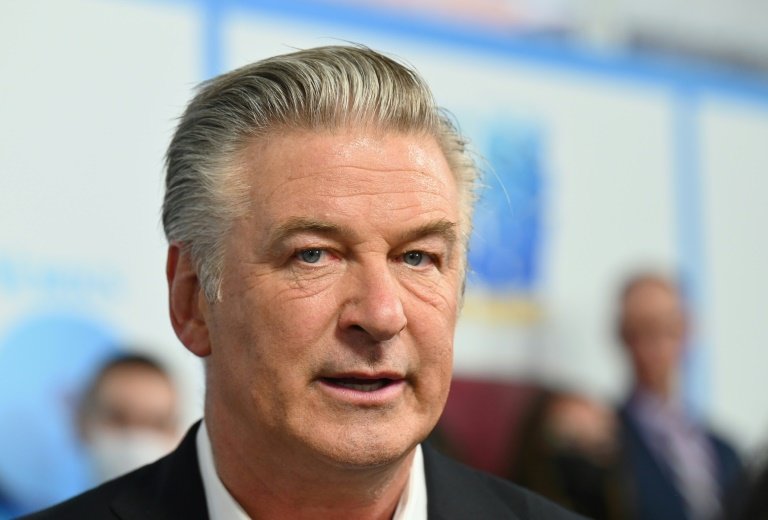 Baldwin has been interviewed by detectives in Santa Fe and has said he is cooperating fully with the probe.

Cameraman Reid Russell also gave his version of events in the affidavit.

Russell, who was standing next to Souza and Hutchins, said Baldwin was "trying to explain how he was going to draw out the firearm and where his arm would be at when the firearm was pulled from the holster."

"Reid was not sure why the firearm was discharged and just remembered the loud bang," the affidavit said. 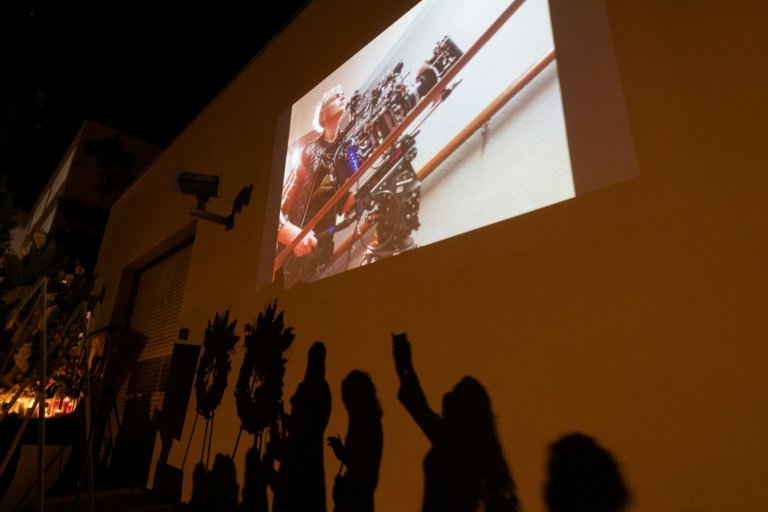 The camera operator said the shooting was not caught on film as the cast and crew were still preparing for the scene.

The incident happened after a lunch break, Souza said in the affidavit, and the director wasn't sure if the gun had been checked again for safety after the break.

"Souza stated there should never be live rounds whatsoever, near or around the scene," the affidavit said, but as "far as he knows, no one gets checked for live ammunition on their person prior and after the scenes are being filmed."

"According to (Souza), it was his belief the gun being used in the rehearsal was safe and used the term 'cold gun' when explaining the firearm safety announcements," the affidavit said.

Attention has focused on the film's assistant director, Dave Halls, who handed the weapon to the actor, and on the armorer, 24-year-old Hannah Gutierrez-Reed.

According to the affidavit, Halls handed one of three prop guns to Baldwin that had been set up on a cart by Gutierrez-Reed.

"(Halls) yelled 'Cold Gun,' indicating the prop gun did not have any live rounds," it said. "(Halls) did not know live rounds were in the prop-gun."

The film's gaffer -- or chief electrician -- said he held Hutchins in his arms as she was dying, writing an angry Facebook post which alleges the shooting was a result of "negligence and unprofessionalism."

"There is no way a twenty-four-year-old woman can be a professional with armory," Serge Svetnoy wrote, adding: "Professionals are the people who have spent years on sets, people who know this job from A to Z."

"To save a dime sometimes, you hire people who are not fully qualified for the complicated and dangerous job, and you risk the lives of the other people who are close and your lives as well," he said.

Veteran Hollywood armorer Guillaume Delouche told AFP he was "very surprised" that somebody of Gutierrez-Reed's age and inexperience "could be a chief armorer on a movie that has to have a lot of gunfighting scenes."

"Rust" was only her second film as chief armorer. She is the daughter of expert Hollywood armorer Thell Reed, whose credits include "Django Unchained."

The producers did not respond to AFP request for comment. Gutierrez-Reed could not be reached for comment, and has deleted her social media profiles.

In the affidavit, Souza told investigators the day had gotten off to a late start because of a dispute with a camera crew about pay and housing.

The director said everyone was "getting along," however, and "there were no altercations that took place to his knowledge."

Calls were growing for a ban on live firearms on movie sets, with a petition gathering more than 25,000 signatures and a California lawmaker announcing he would push a bill banning live ammunition on sets in the state.