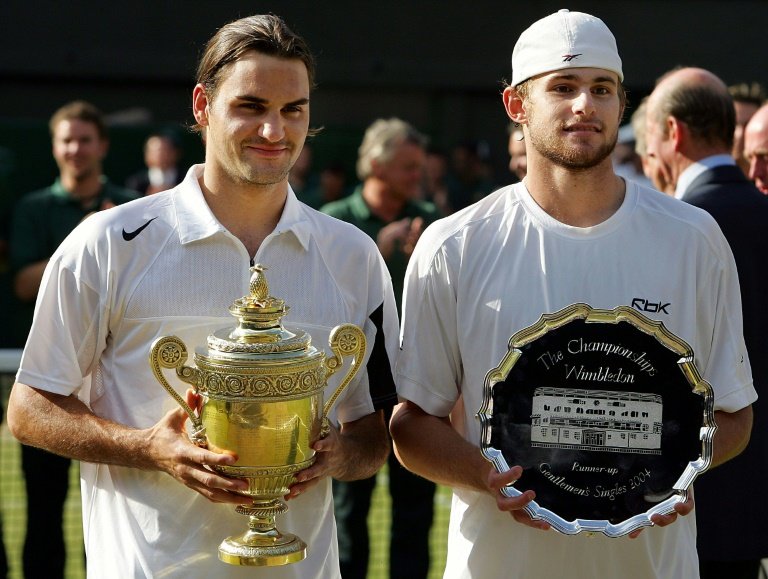 Game of frustration: Roger Federer and Andy Roddick after the 2004 Wimbledon final / © AFP/File

Regarded as one of the greatest players of all time, Roger Federer on Sunday celebrates his 40th birthday with his career at a crossroads.

AFP Sport looks at some of the plaudits he has received during his 23 years in the sport where he has won 20 Grand Slam titles and 103 trophies in all:

"I threw the kitchen sink at him but he went to the bathroom and got his tub."

-- Andy Roddick on losing the 2004 Wimbledon final to Federer.

"I feel that this rivalry is not only in the tennis world. People from outside of our world talk about it and that's good for our sport."

- Rafael Nadal at the 2017 Australian Open

"He hits shots that other guys don't hit. You want to go over and give him a high five sometimes."

- Sam Querrey after Federer hit a 'tweener' in their clash at Wimbledon in 2015.

"Roger can produce tennis shots that should be declared illegal."

"I would suggest that his next opponents don't look to me for advice."

- Andre Agassi after being beaten by Federer at the 2005 Australian Open.

"He hasn't changed a bit. He hasn't been arrogant in the locker room. He never is. That's great to see someone that does it with class. He doesn't intentionally get in anyone's face. He doesn't put people down."

"Federer is the most beautiful man to watch play tennis."

"The best way to beat him would be to hit him over the head with a racquet."

"If I was his coach, what can I tell him? He is a magician with a racquet."

- Andy Murray, after losing to Federer in the 2010 Australian Open final.

"The metaphysical explanation is that Roger Federer is one of those rare, preternatural athletes who appear to be exempt, at least in part, from certain physical laws."

"He's a real person. He's not an enigma. If you met him at McDonald's and you didn't know who he was, you'd have no idea he's one of the best athletes in the world."

"You have to wonder if he's from the same planet."