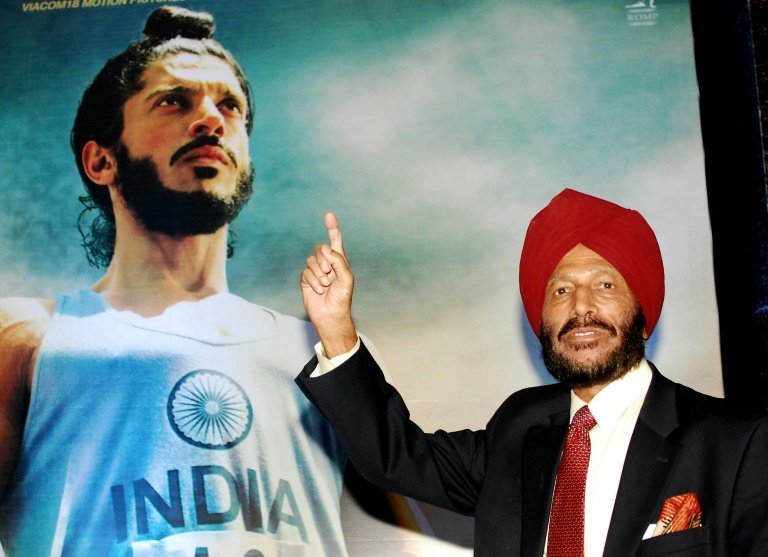 Milkha Singh, seen at the premiere of "Bhaag Milkha Bhaag," the Bollywood film detailing his life story in 2013, has passed away aged 91 / © AFP/File

India on Saturday mourned the loss of track legend Milkha Singh, who overcame childhood tragedy to seek Olympic glory, after he died aged 91 following a long battle with Covid-19.

Singh, a four-time Asian Games gold medallist who was dubbed the 'Flying Sikh', passed away at a hospital in the north Indian city of Chandigarh late Friday.

His wife had also died from the virus earlier in the week.

Prime Minister Narendra Modi led the tributes for Singh, writing that India had "lost a colossal sportsperson, who captured the nation's imagination and had a special place in the hearts of countless Indians."

"Rest in Peace our very own 'Flying Sikh' Milkha Singh ji," he tweeted.

"Your demise has left a deep void in every Indian's heart today, but you shall keep inspiring several generations to come."

Indian women's tennis star Sania Mirza said the "world will miss a legend like you".

Singh, who first tested positive for the virus on May 20 according to Indian media, is survived by three daughters and one son, leading pro golfer Jeev Milkha Singh.

Singh was born in 1929 in Govindpura, in what is now Pakistan.

He lost his family during the tumultuous partition of British-ruled India at independence in 1947, when it was divided into Pakistan and India, before going on to become one of the young country's first athletic heroes.

However, he shot to fame at the 1960 Olympics in Rome when he finished fourth in the 400m after a photo-finish was required to decide the winner.

His time of 45.73 seconds was an Indian national record which stood for almost 40 years. But the devastated Singh never fulfilled his dream of winning an Olympic medal.

His rise to elite athlete made Singh a national hero and inspired a Bollywood film in 2013 called "Bhaag Milkha Bhaag" (Run, Milkha, Run).

The film's lead actor Farhan Akhtar, who won top awards for his portrayal of the star athlete, paid tribute to Singh in an emotional message.

"You represented (to use your own words) how hard work, honesty and determination can lift a person off his knees and get him to touch the sky."

The movie's title refers to the poignant last words spoken to Singh by his father.

As he was dying, he told Singh to flee or he, too, would be killed in the post-partition riots sweeping the subcontinent.

Singh ran for his life and boarded a train with other refugees.

Millions are believed to have died in the bloody sectarian upheaval.

"We all grew up with the folklore of Milkha, he's a larger-than-life figure for us," said the film's director Rakeysh Mehra in 2013.

"He's like what Pele meant to football, or what Jesse Owens meant for track and field for the West."

Mehra was drawn to Singh's story not just for his sporting achievements but for the impact the athlete had on a newborn nation struggling to assert itself, describing him as one of the country's first heroes outside politics.

"This man never ran away from his fears, he ran along with them," he said at the time.