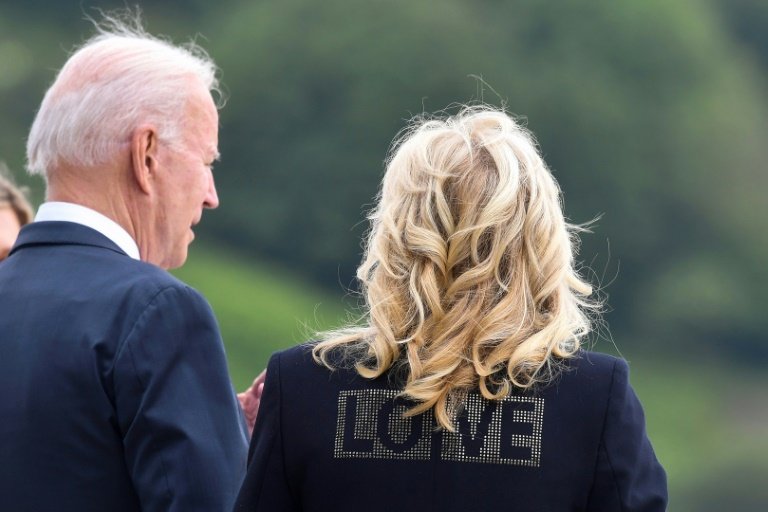 "I think that we're bringing love from America," Jill Biden said when asked about her jacket with the words LOVE on it / © POOL/AFP

US First Lady Jill Biden struck an inclusive tone Thursday, in her choice of words and clothing, as she accompanied President Joe Biden on his first foreign tour.

The 70-year-old made a clear statement by wearing a jacket with the word "LOVE" on the back, as the couple met British Prime Minister Boris Johnson and his wife Carrie on the eve of a G7 leaders' summit.

The first lady's eye-catching choice was guaranteed to draw comparisons with her predecessor, Melania Trump, who cut a stylish but often distant figure in the role.

During a trip to a migrant child detention centre in 2018 the former US first lady infamously wore a jacket emblazoned with the slogan: "I really don't care, do u?"

Aides for Donald Trump's ex-model wife initially claimed it was "just a jacket", but she later admitted it was intended as a message "for the people and for the left-wing media who are criticising me".

Speaking to reporters Thursday shortly after posing for photographs alongside her husband and the Johnsons in Cornwall, southwest England, Jill Biden said she too was now making a statement.

"I think that we're bringing love from America," she said, when asked about the jacket.

"This is a global conference and we are trying to bring unity across the globe.

"I think it's needed right now, that people feel a sense of unity from all the countries and feel a sense hope after this year of the pandemic."

The current first lady flew into Britain late Wednesday, with President Biden announcing "The United States is back!" as he seeks to reset diplomatic ties after the isolationism of the Trump era.

Biden gifted his British counterpart -- a cycling enthusiast -- an American-made bike and helmet, while Carrie Johnson received a leather tote made by US military wives and a presidential silk scarf.

In return, Johnson gave the US leader a framed photo from an Edinburgh mural of the black 19th century abolitionist Frederick Douglass, and Jill Biden a first-edition copy of "The Apple Tree" by British author Daphne Du Maurier, who lived in Cornwall.

While their husbands held their first face-to-face talks as leaders, Jill Biden had tea with the British premier's new wife, who is making her debut in the global diplomatic spotlight.

The 33-year-old married the twice-divorced Johnson, 56, just last month in a scaled-down, secretly arranged ceremony. They have a baby boy, Wilfred.

Carrying Wilfred in her arms, she and a barefoot Jill Biden also strolled along the beach in front of the summit venue in Caris Bay.

Following this weekend's summit, the Bidens will meet Queen Elizabeth II at Windsor Castle west of London, before heading on to Europe for further summits.

"Joe and I are both looking forward to meeting the Queen," Jill Biden said.

"That's an exciting part of the visit for us. We've looked forward to this for weeks and now it's finally here. It's a beautiful beginning."