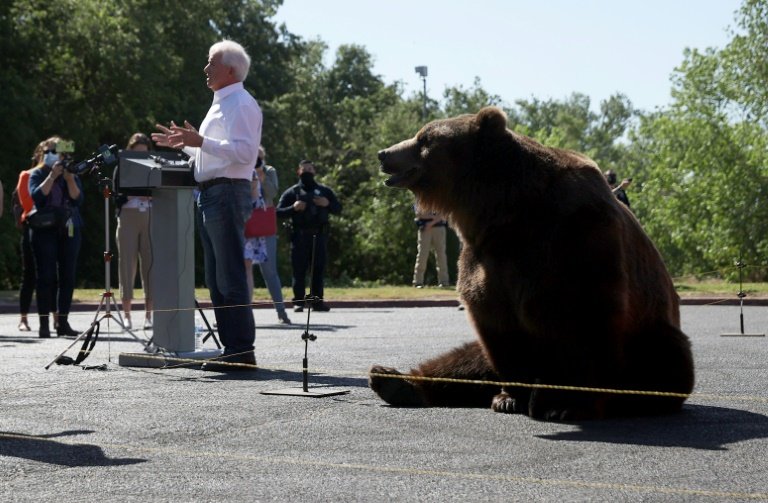 Tag the Kodiak bear sits behind California Republican gubernatorial candidate John Cox as he speaks during a campaign rally at Miller Regional Park on May 04, 2021 in Sacramento, California / © GETTY IMAGES NORTH AMERICA/AFP

One of the many Republican candidates vying to replace the governor of California in an upcoming vote caused a stir Tuesday by bringing a bear to his political rally.

John Cox is campaigning on the theme of "beauty and the beast" -- the "beauty" being current Democratic Governor Gavin Newsom, known for his primped appearance in the state that is home to Hollywood.

Cox has cast himself as the "beast" who will shake up politics in the most populous US state, where a brown bear features prominently on its flag.

"The beautiful politicians have failed California," Cox said during a rally in Sacramento, the state capital. "We need big, beastly changes to save it. I'll cut taxes, make California more affordable and shake up Sacramento."

For a publicity stunt, Cox brought a Kodiak bear, considered the largest ursine species, to his rally.

The bear, named "Tag," weighs about 1,100 pounds (500 kilograms) and was born in captivity and trained to appear in films and television series.

Tag displayed a locally appropriate laid-back attitude Tuesday, content to wait patiently for the end of Cox's speech, munching on snacks given by his trainer or grooming himself with his tongue.

But the use of a bear for political and publicity purposes caused an outcry among animal rights advocates, such as PETA, who said it was "unfortunate and shameful that Tag the Kodiak bear has been exploited in this way."

"Bears need to be left alone, not confined to an open pen on asphalt and wheeled out for events," the NGO said on Twitter, urging "anyone with an ounce of decency to keep wild animals out of their publicity stunts."

A Republican-backed effort to recall Newsom, fueled by his handling of the coronavirus pandemic, has forced a special election that is set to be held later this year.

California allows voters to hold a referendum on replacing its governor if they can gather the signatures of 12 percent of previous voters, which the campaign succeeded in doing.

It was through such a special election that movie star Arnold Schwarzenegger was elected in 2003 to lead the state for the Republican Party.

Polls and experts believe, however, that Newsom is unlikely to lose the recall vote, in a state that has swung even more heavily Democrat in the past two decades.