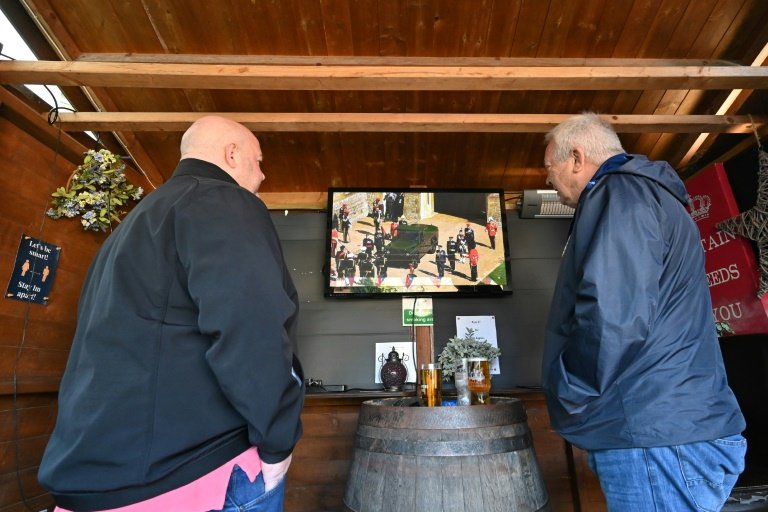 Members of the public flocked to support Queen Elizabeth II as she laid to rest husband Prince Philip on Saturday, taking advantage of cloudless skies to toast him with flowers and beer.

Mourners marked the end of an era, laying bouquets and paying tribute to Philip who died on April 9 at age 99.

Artist Kaya Mar paid his respects the best way he knew how.

He was up before dawn to take the first train from London to Windsor, the location of the Queen's historic castle where Saturday's funeral takes place.

The satirical artist had under his arm a large self-painted work of Philip -- painted this time without a hint of mockery.

"When I learned the news, straight way I painted him, because I liked him, he was long-serving public servant. The country will miss him, the institution will miss him," 65-year-old Mar said.

The Duke of Edinburgh pub in Windsor -- which had a blackboard reading "RIP Prince Philip" outside its door -- welcomed drinkers to watch the funeral. 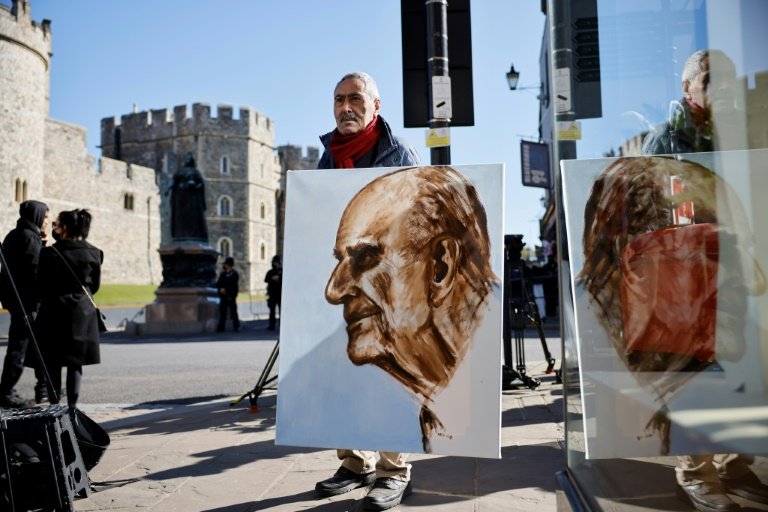 Artist Kaya Mar said of Prince Philip: "The country will miss him" / © AFP

In line with coronavirus regulations, guests sat outside in the beer garden.

Some took a break from their fish-and-chip dinner as the funeral procession began, with all eyes turning to a giant television screen.

Drinkers watched on quietly, with the noise of cannon shots from the nearby castle ringing in the air.

Come 3.00pm (1400GMT), birdsong was the only sound to be heard as the whole pub, and country, fell silent for a minute's tribute to the prince.

"He was a gentlemen, he was the major part of the royal family," said customer Jeffrey Rolfe, 70.

"We will pay our respects and drink this pint in his memory," he added.

- Farewell to a neighbour -

Public mourners had been asked not to come to the castle, where the duke lived his final days with the Queen as they isolated due to coronavirus restrictions.

But many made the journey anyway.

Mourners holding bouquets mingled on Windsor high street with shoppers taking advantage of the bright spring sunshine and the reopening of stores. 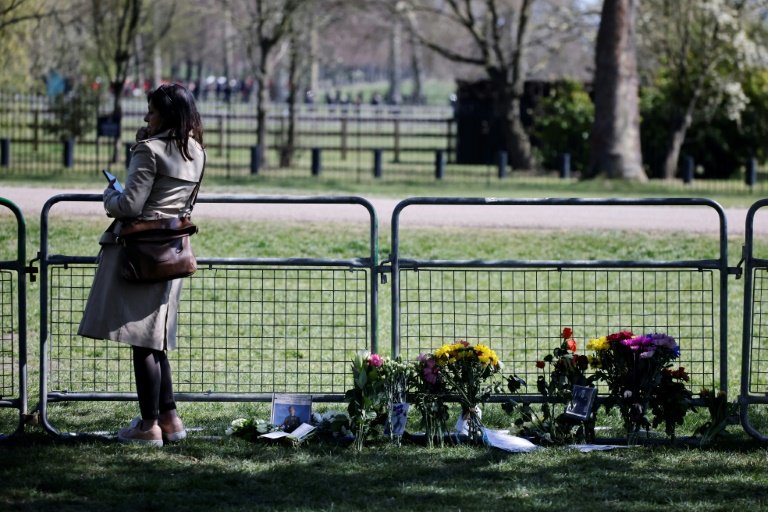 "After the ceremony, I'll leave these flowers near the castle, even if I don't know where," said local resident Maggy Kalpar, 45.

"An amazing man is leaving us, and the whole country is so sad. But I think it's worst here in Windsor, because we feel that it's also, in a way, a farewell to one of our neighbours."

The local branch of high-end supermarket Waitrose showed its support by giving out bouquets due to expire on Saturday for free.

Many other shops windows displayed pictures of the prince, accompanied by a request to observe the minute of silence.

Coronavirus restrictions have forced the royal family to scale back the funeral plans.

But Ieuan Jones, 37, made the 125-mile (200-kilometre) journey anyway from the Welsh capital, Cardiff.

"I still can't get over it. It's really a shame that because of the pandemic we can't pay a wider tribute to the exceptional man he was".

In London, Stewart Duncan, said Saturday was a collective expression of grief at the end of a tough year for the country, which has seen more than 127,000 people die from Covid-19.

"In the past year, we've realised the importance of being there for each other when times are difficult," said the 22-year-old railway worker, outside the Queen's Buckingham Palace home.

Philip's death has turned thoughts towards the twilight of the ageing Queen's record-breaking reign, and what lies beyond when her son, Prince Charles, 72, takes over.

Chris Davies, 39, who served in the Royal Navy, said he feared for the family's future as he laid tulips outside Buckingham Palace with his 12-year-old son.

"I know he (Philip) was getting old but he has always been there," he said.

"I'm more worried about the monarchy when the Queen does go, like when Alex Ferguson left Manchester United," he added, in reference to the Premier League club's decline after its legendary manager retired.

"The respect the Queen gets round the world can't be replicated by anyone."