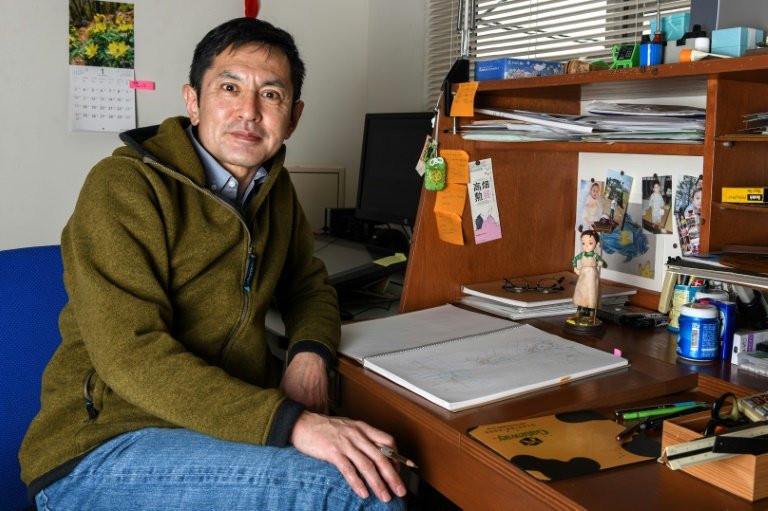 "You could liken big American productions to Tesla electric cars, while what we are trying to do is create an electrically assisted bike for getting around town," Goro says / © AFP

Studio Ghibli, home of the masters of Japanese animated film, has decided to take the plunge into 3D under the direction of founder Hayao Miyazaki's son Goro -- though he is far from ready to put away his coloured pencils.

With the same smiling round face and the same taste for the fantastical as his father, the 54-year-old is coming out of the shadows with "Earwig and the Witch", due to go online as part of the Gerardmer Fantasy Film Festival kicking off on Wednesday.

The film, originally scheduled to premiere at the 2020 Cannes Film Festival and launched instead at the Lumiere event in Lyon, is the story of an impish orphan girl adopted by a witch and befriended by a black cat.

It has the unmistakable Miyazaki imprint, but fans of Hayao Miyazaki standouts like "My Neighbour Totoro" and "Howl's Moving Castle" may be thrown off balance by the colder effect of 3D.

For a studio acclaimed for the visual harmony of its creations, the leap is a gamble, Goro admits, aware of the risk of disappointing a fan base going back more than 30 years.

Even so, he says his perfectionist 80-year-old father, sometimes called the Japanese Walt Disney for the power of his imagination, has given him a "free rein".

"He hardly commented at all during the production," Goro told AFP in an interview. "He stopped by regularly to check on it (but) given the technological differences with traditional animation, he had no frame of reference. It's not his medium."

The move into 3D is by no means "entering into some kind of competition" with the American animated film giants with their vast technical and financial resources, Goro says.

"You could liken big American productions to Tesla electric cars, while what we are trying to do is create an electrically assisted bike for getting around town," he says, noting: "There are landscapes that you can see only thanks to this slower pace of a bicycle."

Despite Studio Ghibli's international fame, "we are neither a big studio nor a big company, more like a neighbourhood workshop, a little creative place," he says. "I don't think we can plan on a generational change as people expect."

While computer graphics offer "a new possibility for the future", traditionalists can rest assured that "drawing on paper, the traditional animation like my father's, will continue at the studio," says the creator of "Tales from Earthsea" (2006) and "From up on Poppy Hill" (2011).

The question of succeeding the master who founded Studio Ghibli in 1985 and won the 2003 Oscar for best animated film with "Spirited Away" has not been settled.

Some talented creators have died, while others have founded their own studios.

Goro marvels at his father's "still intact capacity for imagination" and predicts he could still be at work for another decade.

Eight years after his last work "The Wind Rises", the older Miyazaki is still working on "pretty touching project", Goro says, without elaborating.

Hayao Miyazaki "has got into the habit of retiring only to change his mind a fair number of times in the past," Goro says. "I may retire before him!"