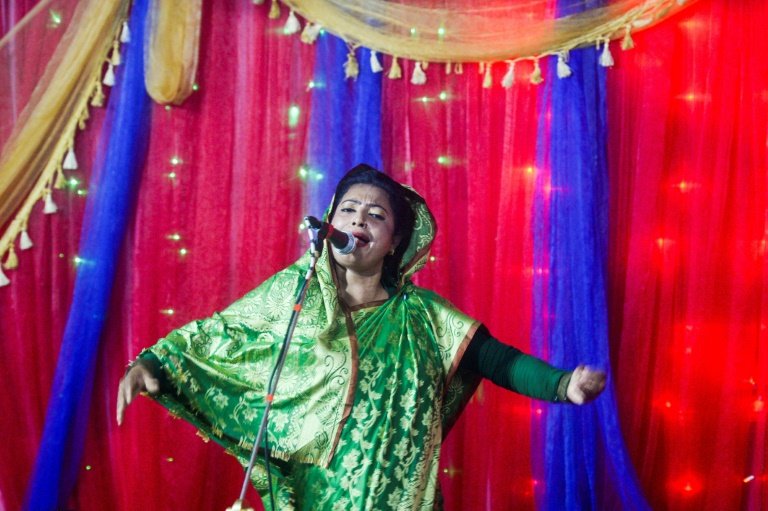 For years Sufi singer Rita Dewan captivated millions of followers in Bangladesh with her haunting ballads, but nowadays she lives in fear each performance will be her last / © AFP

For years Sufi singer Rita Dewan captivated millions of followers in Bangladesh with her haunting ballads.

Today, she lives in fear each performance will be her last.

Accused of defaming Islam and targeted by religious radicals -- a growing force in the Muslim majority country -- she spent months in hiding to escape death threats.

Rarely going out in daylight, she and her family fled to rural shanties and often went without food whilst living underground.

"YouTube is flooded with videos of Mullahs calling for my beheading," she tells AFP in tears. "I was too afraid to go to the toilet even. In rural areas they are mainly outside. I felt like [extremists] would find me and decapitate me."

Sufi Islam is considered deviant by conservative Muslim groups who oppose its mystical interpretation of the Koran.

The movement still has tens of millions of followers worldwide, but in Bangladesh the rise of hardliners has meant numbers are dropping.

In recent years, some two dozen Sufis have been killed by extremists in the South Asian country, some hacked to death.

Sufism has a long tradition in art and academia ranging from the poet Rumi to mathematician Omar Khayyam to modern Pakistani star Rahet Ali Khan.

But Sufis beliefs are increasingly under attack as un-Islamic and conservatives want to introduce strict blasphemy laws in Bangladesh, with the death penalty for offenders.

Dewan has been under pressure since a Youtube clip she appeared in went viral, attracting a storm of criticism.

In it she makes comments about Islam in a singing duel against another artist, who plays a God.

Conservatives have filed at least four cases against Dewan accusing her of damaging religious sentiments and defaming Islam, a charge currently punishable by life in jail.

She insists the clip was taken out of context and shows just a few minutes of an eight-hour performance. 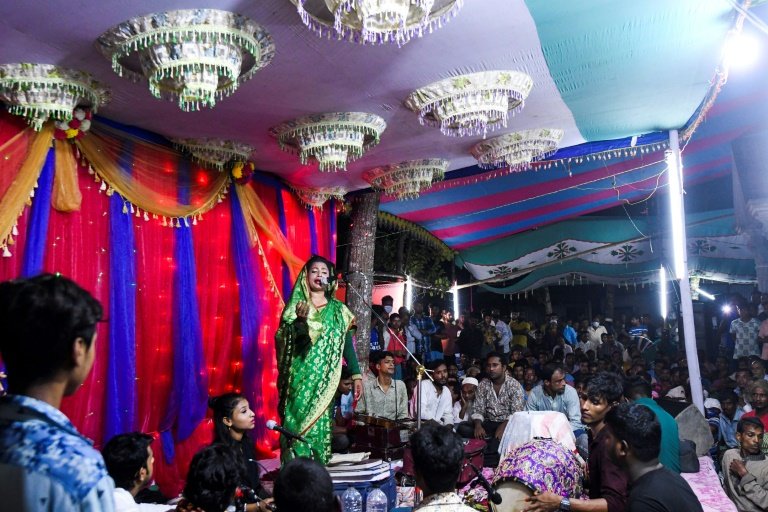 Conservatives in Bangladesh have filed at least four cases against Sufi singer Rita Dewan accusing her of damaging religious sentiments and defaming Islam, a charge currently punishable by life in jail / © AFP

The star apologised but it was too late to stop the threats.

"Some Mullahs have used their sermons to brand me a coward prostitute and told people to kill me if they can find me," she explains.

The star is to make a first appearance in court on Sunday but decided to come out of hiding to perform an eight-hour show for fans at a famed Sufi shrine.

The 38-year-old said her "ecstasy" at being able to perform again was tempered by terror after seeing two men in the crowd she feared were fundamentalists who might harm her.

They left after two songs, but experts say such intimidatory tactics are not unusual.

Saymon Zakaria, a Bangladeshi researcher on traditional music said Sufi art is now under threat from those who want a hardline Islam imposed in the country.

Rights researcher Rezaur Rahman Lenin said the cases against Dewan were part of a pattern to "censor artistic works".

"Artists and their performance are barred, and artists and academics detained and judicially harassed and persecuted on the grounds of insulting or hurting religious feelings," he said.

Male Sufi singer Shariat Sarker spent more than six months in jail this year after being accused of defaming Islam and is now in hiding because of death threats.

Dewan has already missed more than 60 shows because of police concerns about safety and security and says that as a result she has lost thousands of dollars in earnings. 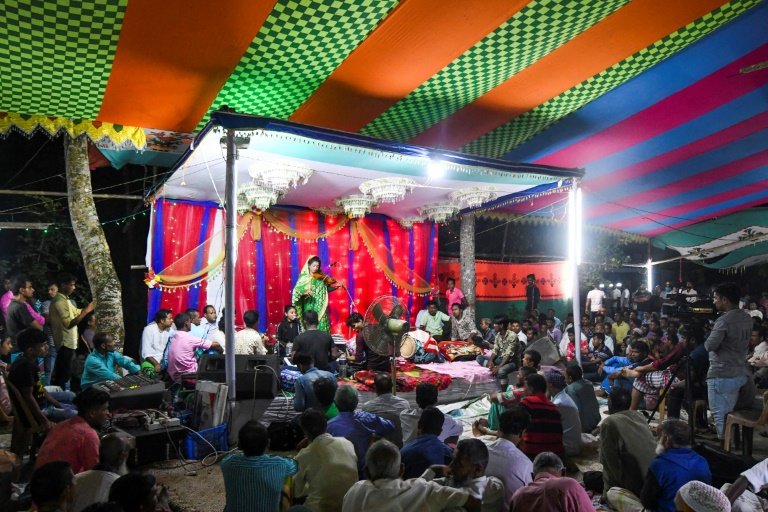 "All of a sudden we became poor. My husband and my daughter are part of my team. All members of my troupe suffered. It's a harrowing time."

The star, who left school at the age of nine to train as a singer and regularly performed to vast crowds, is unsure how she can carry on.

Despite her recent show many shrines are still reluctant to work with her.

The court case makes Dewan fear for her own future but she remains defiant that the art will endure.

"No matter how powerful these Mullahs are this Sufi music tradition will live on in this country. Mullahs have called these songs haram -- prohibited in Islam -- but nowhere in the Koran is it said that music is haram," she insists.

"I am sure this music tradition will live on forever. It has been going on for centuries. People love it. It is pure joy. And Sufis will live here. It was the Sufis who brought Islam here centuries ago, not the hardliners. Bangladesh is the land of Sufis."