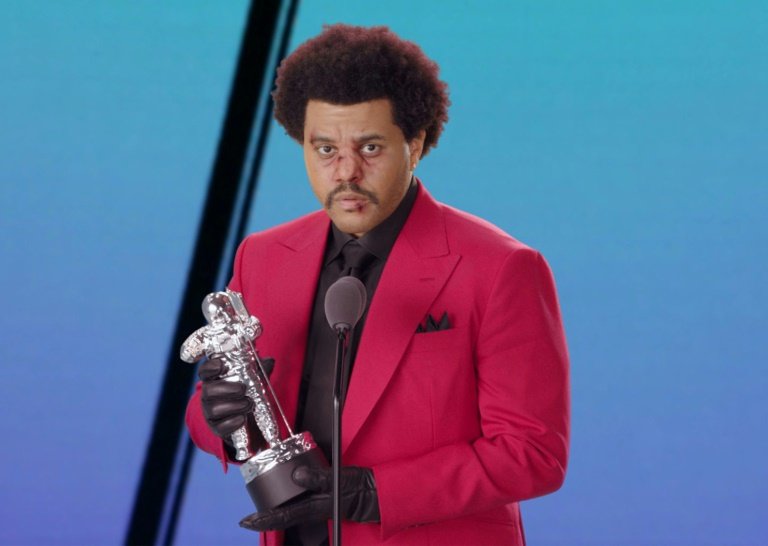 Canadian singer-songwriter The Weeknd, who will headline this season's Super Bowl halftime show, accepting the award for Best R&B for "Blinding Lights" during the 2020 MTV Video Music Awards / © MTV/AFP

Canadian R&B singer The Weeknd will perform at this NFL season's Super Bowl halftime show, the league announced Wednesday, a coveted slot likely to face restrictions due to the ongoing pandemic.

The National Football League's selection of the star born Abel Tesfaye is in line with the sport's efforts in recent years to shake off its reputation for prioritizing aging classic rock acts over younger, more diverse artists.

"We all grow up watching the world's biggest acts playing the Super Bowl and one can only dream of being in that position," The Weeknd, 30, said in a statement.

"I'm humbled, honored and ecstatic to be the center of that infamous stage this year," continued the star known for hits like "Blinding Lights" and "Starboy," a collaboration with French dance-pop duo Daft Punk.

"The Weeknd has introduced a sound all his own. His soulful uniqueness has defined a new generation of greatness in music and artistry," said Jay-Z.

In 2019 the NFL tapped Jay-Z to steer its musical performances -- the halftime show is among pop's most visible gigs -- which the league hailed as a move to promote social justice.

The artist said it would allow the NFL to advance from protest to action, after it struggled to secure performers in 2019 over the treatment of former San Francisco 49ers quarterback Colin Kaepernick, whose kneeling protests against social injustice and racial inequality drew international attention and controversy.

But many criticized Jay-Z's deal with the NFL, with some calling it a "money move" that betrayed Kaepernick, whom the entertainment mogul had thrown his weight behind in the past.

The Weeknd has vocally supported the Black Lives Matter movement, and also donated $200,000 to Kaepernick's legal defense initiative after George Floyd, a Black man, was killed in police custody this past summer.

"It's really hard for me to celebrate right now," the performer said in accepting his trophy for Best R&B at this year's MTV Video Music Awards.

It's unclear how the pandemic will shift plans for the singer, who in the past has gone for high-production, elaborate stagings.

NFL commissioner Roger Goodell has said "our intent is to have as many fans at the Super Bowl as can be done safely" for the event slated for February 7 in Tampa.

With the NFL more than halfway through its 16-game schedule, the league has already been forced to swap around games on several occasions because of Covid-19 outbreaks.

It remains on track to complete the season in its normal 17-week time-frame, but the league has left itself the option of staging an 18th week of regular season fixtures in the event of further Covid-19 disruption.