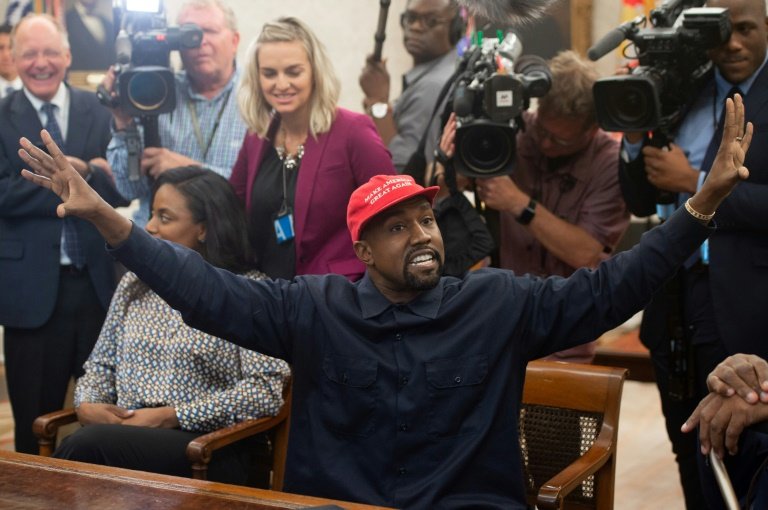 Rapper Kanye West, shown here meeting with Donald Trump in the Oval Office in October 2018, hinted at a 2024 presidential run after a resounding defeat of his curious 2020 campaign / © AFP/File

The United States was on knife's edge Wednesday waiting for electoral results, but the fate of one candidate was clear: Entertainer Kanye West will not win the 2020 presidential race -- but still has future aspirations.

The mercurial rapper, who decided to run for the nation's highest office late in the game as an independent candidate under the Birthday Party, received approximately 60,000 votes from the 12 states where he managed to get on the ballot.

His numbers were less than a pin drop in a razor-thin presidential race, with Democrat Joe Biden holding the slimmest of leads over Republican incumbent Donald Trump as many ballots were still being counted in key states.

The hip hop star and fashion designer saw his highest numbers in Tennessee, where some 10,000 people cast their ballots for West, according to The New York Times.

The mogul who once voiced ardent support for Donald Trump made a social media show of casting his own ballot in Wyoming, saying it was his first ever.

West wrote himself in on the ballot in the western state where he failed to qualify to have his name on the ticket.

According to the picture the rapper posted of his ballot, he did not participate in any of the congressional or local races.

"God is so good," tweeted the superstar, who made a public turn to Christianity in recent years.

"Today I am voting for the first time in my life for the President of the United States, and it's for someone I truly trust...me."

Later he appeared to concede defeat while hinting at a future run, tweeting: "KANYE 2024."

Big Brooklyn, a 31-year-old rapper and music producer, told AFP in Times Square he had voted for West -- and said who becomes the president is less important than vowing to push the future leader to listen.

"It's like everybody's being distracted by who is going to win," he said.

"It doesn't really matter who's going to win if we have a plan in place to present to that president about what we need to have done."

But more broadly the campaign by Kim Kardashian's husband, who suffers from bipolar disorder, raised more questions than enthusiasm.

West long ago broke ranks with most of the left-leaning entertainment industry to loudly voice his support for Trump.

In 2018, they met in the Oval Office -- a surreal tete-a-tete that included a hug from the rapper as well as an on-camera rant.

But in 2019 he said his support for Trump had been a way to razz Democrats.