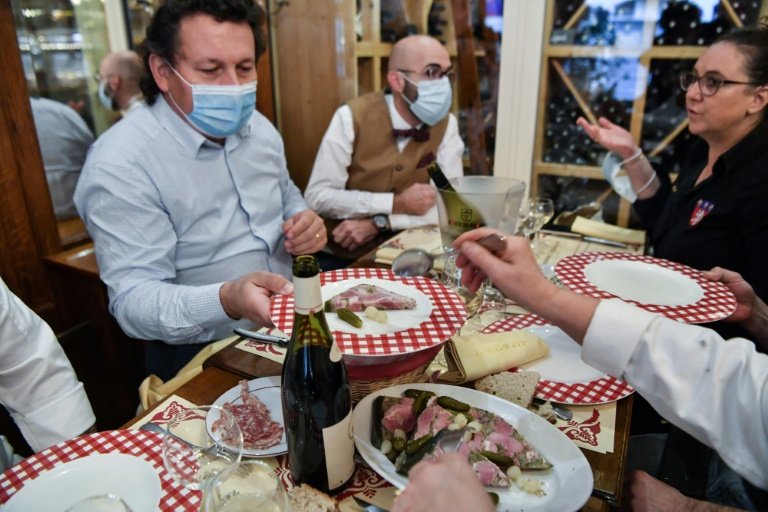 A traditional morning meal inside a "bouchon", a restaurant typical of Lyon in southeastern france. / © AFP/File

It's just after 10 am at Yann Lalle's tiny restaurant in Lyon, but his temple of French dining isn't serving coffee and croissants -- patrons are being treated to poached sausage and glasses of red wine.

"We're adapting to the hours imposed on us," Lalle said, referring to the nighttime curfew that took effect in several cities this month to combat an alarming surge in Covid-19 cases.

Deprived of a dinner crowd, he and other Lyon restaurants are trying to revive the traditional "machon," a boozy breakfast featuring the classic hearty dishes that put Lyon on the global culinary map.

Andouillette sausage and mashed potato canapes, walnut and endive salad, ham and parsley pate, and creamy herbed cheese are washed down with bottles from the famed vineyards surrounding the city.

The machon, named after the verb "macher" (to chew), dates from the 19th century, when workers in Lyon's silk factories would make the most of their first break of the day.

Some of the city's beloved "bouchons," bistros where foodies cram into low-ceilinged dining rooms steeped in tradition, have been dishing up machons for decades.

But others are now resurrecting it in a bid to bring in business when people can still be out and about.

"It lets you forget the Covid situation, have a good time, raise a glass and eat -- it's a little earlier than usual, but it goes down perfectly," said Benoit Quiblier, a tripe producer enjoying the midmorning feast at Lalle's restaurant, Le Poelon d'Or.

The French Covid curfew was "like a cold shower," said Lalle, adding that he now fears another lockdown is looming as hospitals again warn they are filling up fast.

Like other restaurant owners, he has been hammered by a dearth of wary clients despite investing in plexiglass barriers to place between tables. 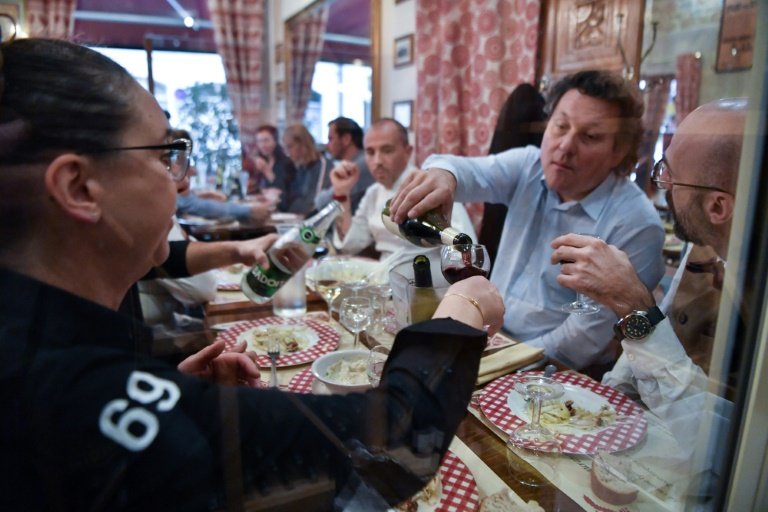 Bouchons name is thought to derive from an old French word, 'bousche,' a round bunch of pine branches that restaurant owners would hang from their doors / © AFP

Lyon is home to around 30 bouchons, whose name is thought to derive from an Old French word, 'bousche,' a round bunch of pine branches that restaurant owners would hang from their doors to mark them out.

Many have already stripped down their menus to cut down costs.

The absence of foreign tourists, in particular Americans and Chinese, has dealt a further blow.

A second lockdown, after the two-month nationwide shutdown last spring, might prove insurmountable.

"The first wave was very hard to recover from, but this second wave could be a catastrophe," Lalle said.

The brunch-like breakfast, costing 25 euros ($30), is meant to carry people over until dinner. For now it is being served on Fridays and Saturdays, though he might offer it on other days if it proves popular.

But it is unlikely that the morning meal will compensate fully for the lost dinners, when people tend to spend more time and money -- "for restaurants, that's the best in terms of profits and margins," Lalle said.

And he acknowledged that today's machons are more subdued affairs compared with the pre-coronavirus versions, when vineyard owners were invited to promote their wines.

"It was more lively and festive, you would go from one table to another, and share plates," he recalled. "With the new health requirements, that's no longer possible."